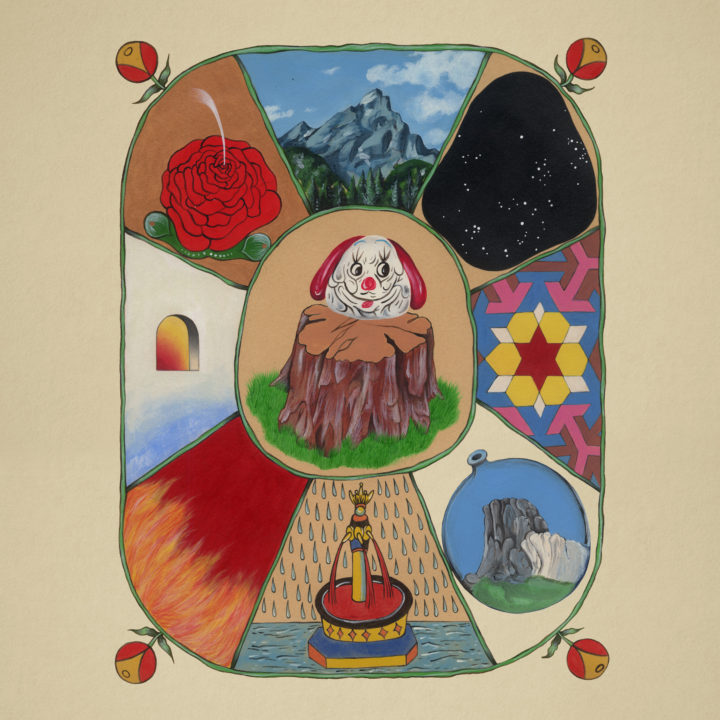 Stop, drop and rock ‘n’ roll: White Denim is back – with more oomph than ever before. I’m talking about even more rocky edginess than the 2013 album Corsicana Lemonade, comprised of hits like “Pretty Green” and the eternally soulful “A Place to Start”, and ANY of the band’s seven albums preceding Performance.

Because, whilst the Austin collaborative has evidently fashioned its latest release on the complex tapestries of psychedelia, sentimentality and psychedelia – and every emotion and musical nuance in between – displayed by its predecessors, it unleashes its expression of punchy and subtle emotions with more fervency, more heart, and more fire than ever before.

Nostalgia wraps around excitement in a sequence that simultaneously revels in past stylistic achievements (evoking the gradual rise of the band in global approbation from debut spectacle Workout Holiday to penultimate release Stiff) and flaunts a capacity for artistic development and growth.

It brims with excitement throughout; packing the same level of excitement and anticipation that fuels a debut album, an effect that is impressive and enviable, as – any band that has lasted beyond a decade will attest – it poses a great challenge to retain the same energy and enthusiasm that artists’ possess in the early stages of their careers.

When opener “Magazin” roars with blatant vocal moxie – delivered by singers James Petralli and Stephen Terebecki– and a sumptuous knitting together of sexy guitar strokes and sax playing, the band proves itself unscathed, invigorated by the passing of time.

The singers’ first few lines ride on a guitar and drum blend emblematic of White Denim’s easy going opening style, before delving into a more varied melange of instrumentation, lyrics and vocal ranges, setting up the genre experimentation that feeds the album.

In spite of using such a traditional song formula, the overall sequence bursts with emotion throughout, as the following titular track and nearly all of the ensuing pieces, particularly “Fine Slime” and “Double Death”, suffuse the album with such eagerness they each mimic the upbeat thrill of classic rock.

With its heightened vocal effects and urgent guitar thrashes, “Performance” recreates the pure happiness of youth, foregrounding its theme of young nonchalance with the flippant refrain ‘Never mind girl/we’re better off this way’ on a backdrop of jaunty drumming and scratchy guitar patterns. Here, the band capture the unapologetic character of youth and place it against a foundation of almost joyful music, juxtaposing content and form to convey its argument – and doing so impeccably.

Both “Fine Slime” and “Double Death” interlace the seductive appeal of the initial sequence piece with the fierceness of the eponymous piece. But while the former – with its gentle vocals and more intricate guitar patterns – achieves this through a sophisticated soft rock sound, the latter illustrates punchy content with the use of psychedelia, in the form of guitar medleys.

Predominantly grittier in sound, “Moves On” emits a pure rock feel – that musical sentiment that galvanises listeners to reject the homogeneity of manufactured music – on a sturdy bed of sharp guitar riffs, heavy drumming and emphatic vocals. Its employment of frenetic synth chords and psychedelic guitars in its gradual fade out, however, imbue the sequence with a shoe gaze effect, one that conjures oneiric imagery and brings an ethereal quality to the album. Such an intensity of dreaminess recurs towards the end of the sequence, in “Sky Beaming”, a soothing, subtle feast of math rock and highly pleasing synth notes; an auditory feast that somehow manages to resemble both Kurt Vile and the Violators and Chon at the same time. Yet again, White Denim demonstrate its ability to blend influences, as well as styles.

Fearless vocals and scratchy guitars evoke the nonchalant, self-assured spirit of T-Rex, before unfolding into a passionate musical spree reminiscent of the Foo Fighter’s early work in “It Might Get Dark”. As with “Sky Beaming”, the band showcases its ability to experiment with different influences as well as styles.

Much like the Seattle post-grungers, the Austin team use elements of grunge –piercing guitar sequences and progressive drumming sequences – to create an overarching tone of positivity. Whereas Foo Fighters experiment with more traditional alt rock tropes, however, White Denim apply airy vocals and country-esque guitar twangs to achieve such an overall effect.

“Backseat Driver” prolongs the post-grunge aesthetic of its predecessor through its display of emphatic vocals, but also incorporates more soft rock and psychedelic elements, predominantly in the form of synth, buoyant drumming patterns, and even a faint twinkling of a triangle. This immersive tour of rock-specific genres reflects the thoughtfulness behind the album’s creation: collectively, all band members have evidently worked hard to produce a sequence that celebrates not only their own stylistic progression, but also that of rock as a whole. It isn’t merely an exhibition of rock – it’s an ode to its eternal influence and ever-adaptive style.

Acoustic guitar is granted priority over drums for the first time in the album, marking a stylistic decision that reveals the band’s collective ability to switch from electrical to more classic instrumentation and achieve the same thematic effect.  Electrical guitars appear in the fade out not signify a reliance on electrical instruments for creating appeal, but rather to illustrate the collective’s capacity for stylistic fusion – on this occasion mirroring the contemplation evoked by acoustic music with the reflective qualities of electric guitars.

White Denim concludes its eighth studio album with the unspoken assertion that rock is intricate, music is complex, and that any instrument can be used to convey any emotion or thought. As with penultimate piece “Backseat Driver”, the climatic “Good News” signs thealbum off by articulating the endless possibilities of rock ‘n’ roll.