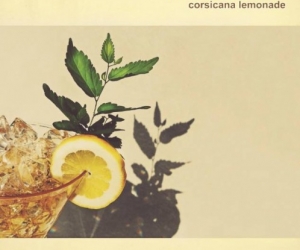 Corsicana Lemonade is White Denim’s fifth record. Previous albums have been a melting pot of American rock music – virtuosic southern rock, psychedelia, funk, prog, and punk, thrown in a blender. For some, this mix may sound nightmarish, but the group manages to successfully cross genres without venturing into the realm of cheesiness or unwarranted bravado. With production work by Jeff Tweedy, the album is a perfect introduction to a band that has improved its sound and songwriting greatly since 2011’s D.

The album opens with classic rock banger “At Night in Dreams”. The song and its main hook are inspired by Thin Lizzy, right down to the shuffle beat and dueling guitar solos. Like many of Lizzy’s songs, “Dreams” is the sound of a well-rehearsed group performing musical gymnastics, freely and gracefully. The title track “Corsicana Lemonade” also shares a lot in common with these traits, albeit a little more Steely Dan than anything else.

When White Denim aren’t trying their hand at prog, they flirt with some of the more gratuitous aspects of 60’s psych – the heavy auto-wah and loose acoustic chords on “Limited By Stature”, or the Mellotron on “New Blue Feeling”. When the group diverts from their prog-rock inclinations, they reveal their capability to write beautifully simple songs, and these two are perfect examples.

The album comes to a close with the stunning “A Place to Start”. It sounds like a lost hit from mid-70s AM radio. This is pure Bacharach-ian pop, the type that resonated with an entire generation of top 40 fans. It wasn’t cool then and it may still not be, but White Denim pulls it off as only they can: a fascinating spin on old ideas that feels brand new. With a great mix of innumerable genres from decades passed, Corsicana Lemonade is a marked improvement from their earlier releases and comes highly recommended.