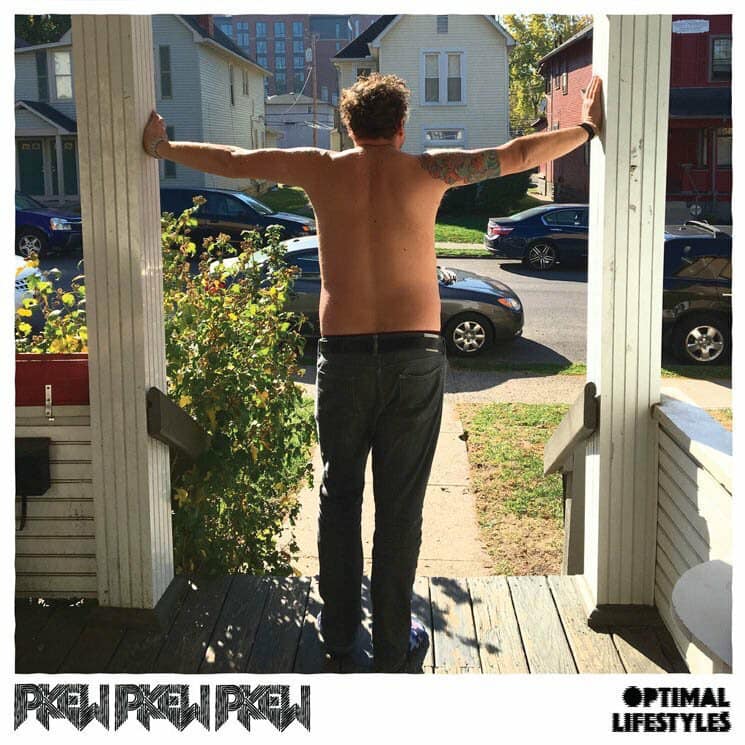 The new album by Toronto punks PKEW PKEW PKEW is steeped in nostalgia when it comes to both its lyrical themes and its sonics. ‘Optimal Lifestyles’ has the four piece reflecting back on simpler times pounding beers and skating. These nods to days gone by are a double-edged sword as they’re part sepia toned and joyous, whilst being encased by a feeling of disappointment and longing. There’s also an angsty frustration running throughout the outfit’s new record that has them peering inward with a self-deprecating looking glass. The pop-punk that wraps itself around these topics starts out like The Gaslight Anthems’ rough ‘n’ ready punk ‘n’ roll, but it quickly transcends into formulaic, non-descript Warp Tour (god rest its soul) style chugging guitars, high octane vocals, histrionic, over the top guitar solos and clattering drums. It’s that kind of bratty, faux “outsider” pop-punk that would have appeared on an American Pie soundtrack al a Sum 41, Blink 182 et al, but a diluted version.

‘Optimal Lifestyles’ sounds like FIDLAR if the LA delinquents had been sanitised and created for a straight to DVD movie about what it’s like to be an aging musician that once wanted to be or was once in a punk rock band. Not to completely bash this album, as the band have poured their heart and soul into it but the fratboy- esque vocals and huge power chords feel templated, like a box ticking exercise, akin to a focus group outcome of what a radio friendly punk band should sound like. The fixation of hitting the beers makes the album sound juvenile, like, yeah guys, ok we get it – you like a drink. “I don’t drink when I’m passed out” sings Mike Warne on ‘Passed Out’, ‘Still Hanging Out After All These Years’ is more of the same with Warne claiming “if you pass out you’ll be fine on the couch” after announcing “let’s sink these beers”. Equally the hormonal musing on ‘Passed Out’ comes across as trite “the only one torturing me is myself”. ‘I Don’t Matter At All’ mimics the same sentiment “every now and then I get reminded I don’t matter at all”. Aside from drinking and self- loathing, ‘Skate 2’ is a dullard recounting of…errr…skating “shred until your dead or until you break your wrist again”. Then there’s the utter randomness of ‘I Wanna See A Wolf’ which literally is a song about wanting to see a wolf from the band’s tour bus. It’s more a joke/soundcheck song to be honest.

You really can’t fault PKEW PKEW PKEW’s enthusiasm and the energy that’s oozed out by ‘Optimal Lifestyles’ is commendable, but this is a record that sounds dated and not in a cool retro way but more of a, twenty years too late to the party way.