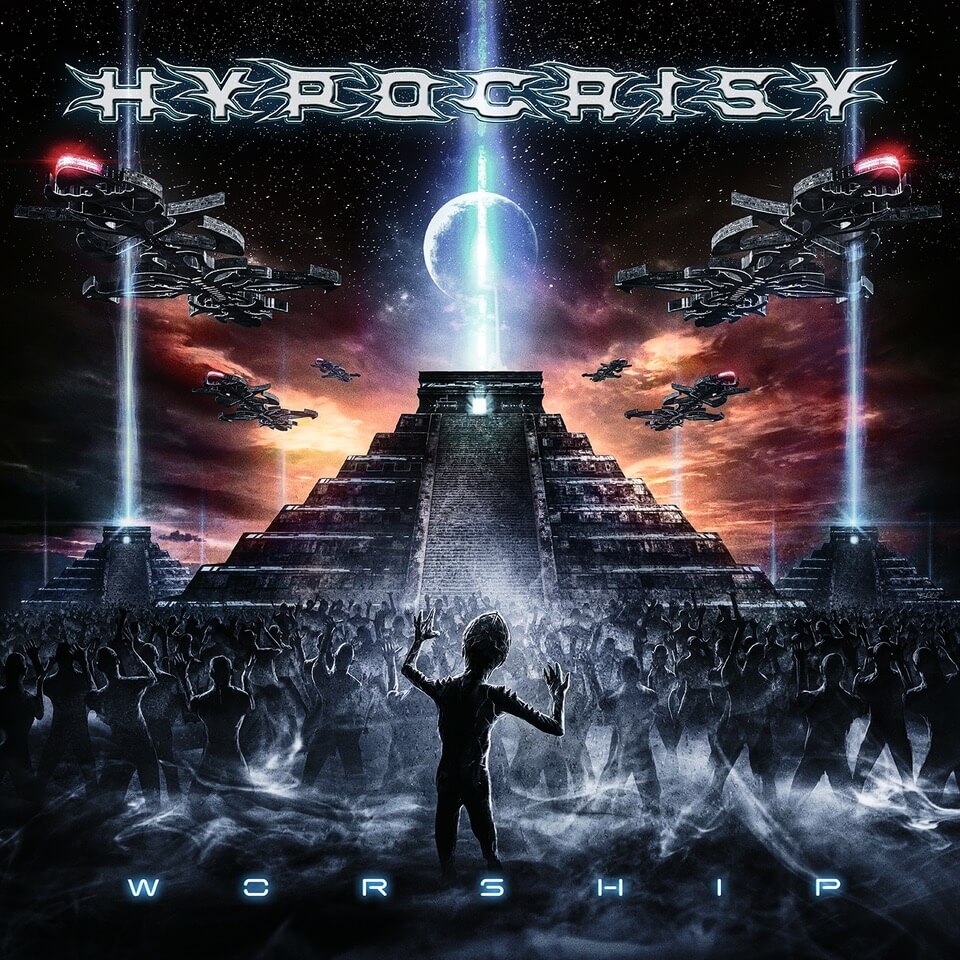 After an eight-year wait, Hypocrisy returns with the follow-up to 2013s excellent End of Disclosure. Worship picks right up from where that album left off with crushing yet melodic death metal about aliens, black ops government, and conspiracies that have long been part of their lyrical subject matter.

Frontman Peter Tägtgren is a busy man. On top of being one of the most in-demand producers in Sweden, he has a successful solo project called Pain. Up until recently, he was also collaborating with Rammstein’s Till Lindemann on his Lindemann group. All this must contribute to the longer stretches between Hypocrisy records, but it also seems to have strengthened the material since 2005s Virus. The ability to express different sides on these projects seems to remove any compromise in the compositions. The addition of drummer Horgh, known for his work in Immortal, has contributed to this, bringing great intensity and precision to the drums.

Tägtgren produced Worship at his Abyss studio. Anyone familiar with his work on their past releases will immediately recognize the thick and powerful guitars, punchy drums, and ethereal keyboards. Longtime bassist Mikael Hedlund also has a great tone that helps fill out the low end nicely. Even though Tägtgren has utilized these sounds in other productions, they are firmly recognizable first and foremost as the sound of Hypocrisy. Tägtgren is a versatile vocalist, capable of deep growls, high-sustained shrieks, and melodic singing. Enabling them to experiment further with their approach than many of their peers and producing some stand-out tracks over the years utilizing a slower, sombre tone, expressed to the maximum on 1999’s Hypocrisy. I was also particularly fond of End of Disclosure, a strong record most bands would kill to make as their twelfth album. Worship compares to the more recent material but does manage to balance some of the melodic ideas and pace presented on the older albums. Here, Tägtgren sticks to his low growls for much of the 11 tracks, keeping the songs firmly on the death metal side. It’s a powerful juxtaposition to hear the melodies in this context. Chemical Whore is a definite highlight on the album, the guitar motif that introduces the vocal is particularly strong. Another Day channels 80s thrash but with that massive guitar tone set to pummel. Bug in the Net is another stand-out late in the album featuring beautiful and epic keys that bring in that feeling of doom and wrap around Tägtgren’s growls to super effect.

Hypocrisy in their 30th year remains a somewhat unsung band in death metal. They have always had their own sound and vision and rarely falter. Even with what I would consider a weaker period in their discography (2000-2004), they have always maintained a strong identity. I struggle to think of too many bands in this genre 30 years in still creating albums this good. Worship gets better the more I listen to it. Even if we have to wait eight years for another record, I imagine it will be worth the wait.