Deap Vally have always been an act to relish working within their own self-imposed restrictions as a duo, looking to maximise the volume and impact but with the limited sum of their parts. Despite putting out a record with Flaming Lips in 2020 (‘Deap Lips’ – geddit) Lindsey Troy (vocals/guitar) and Julie Edwards (drums/vocals) haven’t released anything under the Deap Vally moniker since 2016’s ‘Femejism’, until now.

‘Digital Dream EP’, is a four track collection of songs that sees the twosome break free of their shackles, by ushering in a clutch of different collaborators. On the decision to hook up with a wide range of pals, the pair have commented “The Digital Dream EP was an amazing opportunity for us to remove all the style barriers from our music and collaborate with some of our favorite people and artists. The songs on this EP were composed in a purely democratic way, allowing all artists in the room to contribute, shape, and participate in their creation. Writing these songs was about process over result, encouraging everyone to enter into potentially uncomfortable places (ie. jamming and letting go of preconceived notions of approach and genre) while feeling safe and unjudged. True musical alchemy.” Suffice to say, this is Deap Vally as we’ve never heard them before.

From the get-go it’s evident that ‘Digital Dream EP’ is going to be a different animal to the pair’s rip-roaring blues-rock of their previous releases. ‘Look Away’, featuring jennylee (aka Jenny Lee Lindberg from Warpaint) is a swampy stroll through hazy tones and woozy melodies that align themselves closer to Lindberg’s day job than that of Deap Vally’s. Like an improvised jam, the track wafts through sedate, smoky motifs, with the occasional spindly riff and a cyclical bass/drum trade off. Troy, instead of sounding primal, as heard numerous times on previous releases, delivers a hushed vocal, as she states “it’s a holiday in your arms”, while also commenting “this is heart/this is heart/this is heartache”, serving up some queasy lyrical melancholy to match the entranced sonics that envelope her. Keeping with the melancholic themes, the EP’s eponymous track strips matters back further. Gliding into an almost trip-hop direction, brushed drums and delicate bleeps and pops tell the story of a “post-apocalyptic world in 2068”, narrated by Soko (aka Stephanie Alexandra Mina Sokolinski). The guest vocalist’s soothing tone and spoken word calmness offers a beguiling dichotomy to the stark imagery being painted of a near future where everything seems pretty doomed. Verging close to low-key jazz, the bleakness is palpable; “they wiped out my identity/there is no freedom to fight for” and “my brain is a machine that has no singularity” provokes some serious 1984 totalitarianism comparisons. The song eventually swells into a cosmic, whirring extending outro as Troy purrs about being “lost in a digital dream”. As departures go, ‘Digital Dream’ is unlike anything Deap Vally have created before.

‘High Horse’ is the one moment on the EP where the band, with the help of KT Tunstall and Peaches, sound like their earlier work. Adopting a hip-hop strut, with guitars and drums that bounce with a cocky swagger, Troy’s guttural blues tone oozes with provocation “I could be fucking anything I want/yes I’m driven/I use what I’m given”. Chuck in some sleazy saxophone, some uplifting backing vocals and you’ve got Deap Vally (and friends) at their guttural best. The only fly in the ointment is Peaches’ spoken word rap towards the end. Although, there’s enough quality here to see it as a hiccup rather than a major derailment. Unpredictability and rich experimentation is reinstalled for closing track ‘Shock Easy’. The enlisted contributor here is Jamie Hince from The Kills; ironically from another two piece famed for making a racket with a sparse headcount. Instead of treading the expected route of raw blues rock, Troy, Edwards and Hince’s combined efforts manifest in the guise of distorted guitar squalls, other worldly backing vocals that veer close to gospel and blown out drums. Shrouded in darkness and a coarse yet bare aesthetic, it’s like the husk of rock ‘n’ roll is being shook due to the primal nature of the EP’s final moments. Lyrically, Troy’s narrative draws similarities to title track’s dystopia, as she describes a hostile environment, from which escape seems pretty difficult “waking to a nightmare/go back to sleep/you’d rather be in hell than be here.”

Whether or not this signals a new artistic direction where anything goes for Deap Vally is to be seen, but for the moment ‘Digital Dream EP’ finds the pair inspired, invigorated and creatively infectious – more of the same please. 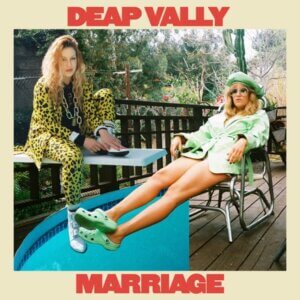