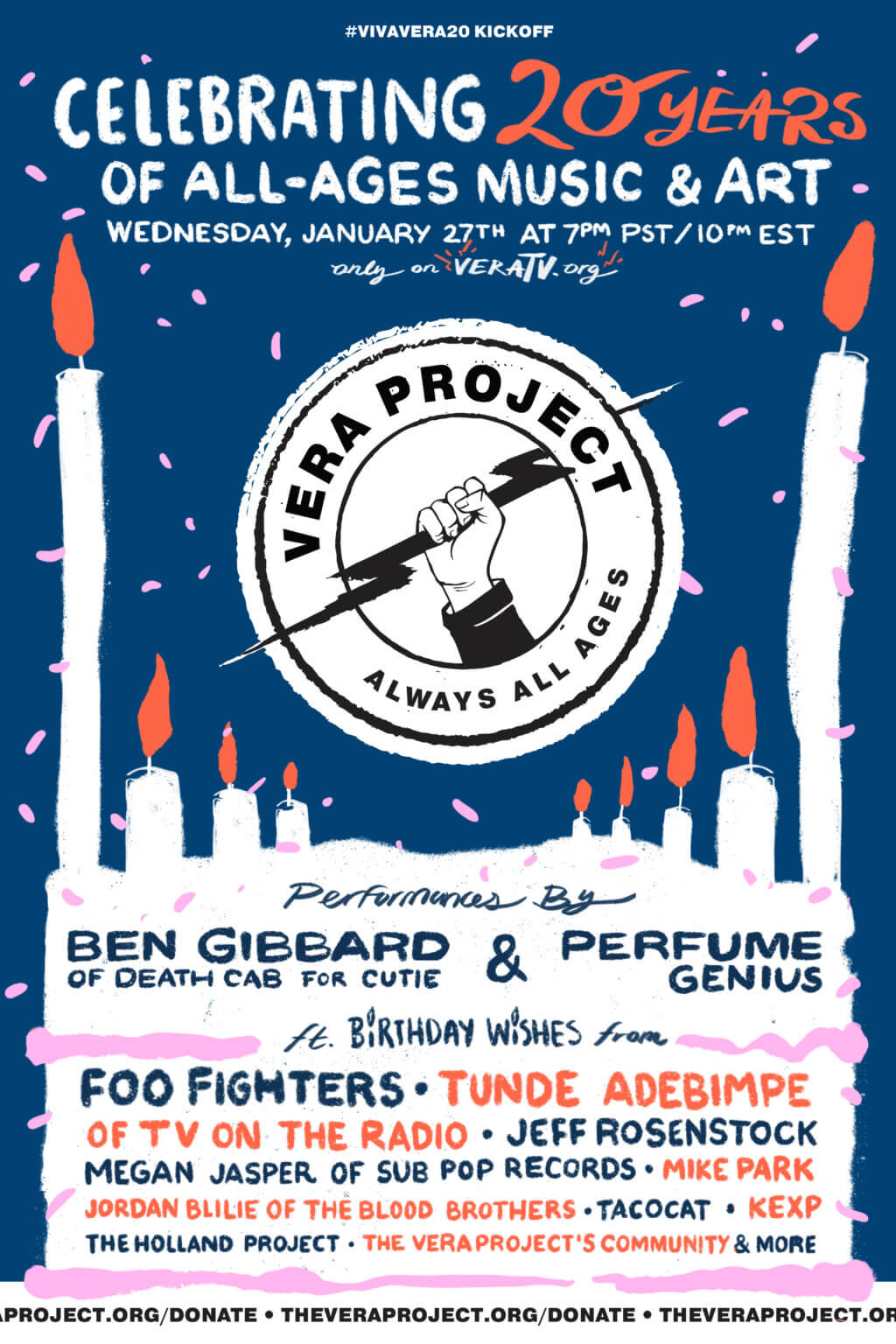 The Vera Project, has announced today Viva Vera 20, a celebration of the Seattle nonprofit’s 20 years as a youth-led, community-oriented music and arts space. Marking the anniversary of VERA’s first show, the festivities will commence January 27 with a livestream program featuring appearances or performances from artists including Ben Gibbard, Perfume Genius, Foo Fighters, TV on the Radio, Tacocat, Mike Park and more.

The Vera Project fosters personal and community transformation through collaborative, youth-driven engagement in music and art. A music venue hosting local and touring artists, screen print shop, recording studio, art gallery, educational institution, and safe space for radical self-expression, VERA was founded in Seattle in 2001 by activists Shannon Stewart, James Keblas and Kate Becker. Its creation was largely in response to the Teen Dance Ordinance (TDO), a controversial piece of Seattle legislation enacted in 1985 that essentially banned all-ages and youth-driven concerts by making events with attendees under 18 prohibitively expensive and logistically difficult to produce. In 2002, under the civic pressure from the same community leaders who helped open the doors to VERA a year earlier, the City Council repealed the TDO.

“It’s ironic that as Seattle was becoming an international mecca for music, the city’s young people were living a Footloose existence, prohibited from coming together to dance or see live shows,” said Vera Project co-founder and current King County Creative Economy Director Kate Becker. “What’s always been inspiring to me is that discriminatory law translated into civic engagement, galvanizing young activists to organize and lobby local government. To this day, that energy is still at the heart of VERA.”

“Vera has helped to develop and nurture twenty years of young people who are today working directly to shape communities and culture. David Price, a former musician and current Seattle-based artist manager, Nick Turner, who serves as an A&R and sales representative at Sub Pop, and Ryann Donnelly, a musician and published author living in NYC are among the many people who came from Vera and are actively contributing in meaningful ways to our extensive music community,” adds Sup Pop’s CEO Megan Jasper.

VERA serves as a model and inspiration for all-ages organizations in cities like Reno, NV and Olympia, WA. Reno’s Holland Project, which recently celebrated its 12th anniversary, was particularly influenced by VERA’s volunteer-fueled, participatory approach.

“VERA’s success paved the way for organizations like Holland to exist,” said The Holland Project co-founder and Executive Director Britt Curtis. “All of us young punks and dreamers now had a perfect example of how important these kinds of spaces are. We had a vision to share and a map to show us how to get the job done.”

Every year, VERA disburses tens of thousands of dollars in scholarships, contributes nearly $100,000 to emerging BIPOC-led spaces, trains the next generation of community leaders, and features more young, BIPOC artists on its stages than anywhere else in Seattle. The venue has nurtured Northwest artists such as Fleet Foxes, The Gossip, Macklemore and Car Seat Headrest at the start of their careers and has hosted major acts like TV on the Radio, Sleater Kinney, The Shins, PUP, Rico Nasty, Pussy Riot, and The Evens when they first began to tour.

“The sense of community, and love for the space and the people who were in it, was immediate and palpable,” said TV on the Radio’s Tunde Adebimpe. “It makes me so happy that it’s still around to provide that inspiration and that community to anyone who shows up, because that’s a life-changing quality.”

Throughout the COVID-19 pandemic, VERA’s business model has continued to allow it to contribute to the community when need is most acute. VERA’s virtual fundraising events have provided financial relief to its members, staff and performers throughout the year, while its DIY Community Relief Fund has already raised nearly $100,000 for DIY community spaces and Black-led arts organizations across the Seattle area. Programming like Safe in Sound, created in partnership with King County Public Health, rolled out youth-centered PSAs, live-streamed concerts, and educational segments on public health, reaching nearly 1 million people in King County. Programs such as Equip the Kids and Live from our Living Rooms have helped generate funds and kept its community afloat throughout the pandemic.

“As America’s music industry and arts scene start to rebuild, we have an incredible opportunity to make something better. Something centered on empathy, equity and community.” said Ricky Graboski, Executive Director of The Vera Project. “It is our collective responsibility to build an infrastructure that’s resilient and responsive enough to meet the needs of the moment. And VERA is leading the charge.”

Additional information on the Vera Project:

Vera is an acronym for the Latin phrase Veri Et Recti Amici, which translates to “True and Sincere Friends.” The VERA name and motto were coined in 1899 by Vera Groningen, a student-run concert venue and community center in the Netherlands founded as a center of youth-led art, culture, and political awareness. In Seattle, VERA’s original members aligned themselves with the groundbreaking Dutch cultural space to emphasize the strong community orientation that made the Vera Project possible and would be the guiding principle of its work.

As of 2020, VERA annually offers access and opportunity in the arts to over 25,000 young people. That adds up to more than half a million true and sincere friends who’ve come through the doors of the Vera Project, not to mention the thousands of members and volunteers who have shaped the organization’s mission over the years. By carving out a safe space for youth-driven music and art in Seattle, VERA has become a national leader in a progressive movement of participatory culture-making for people of all ages.