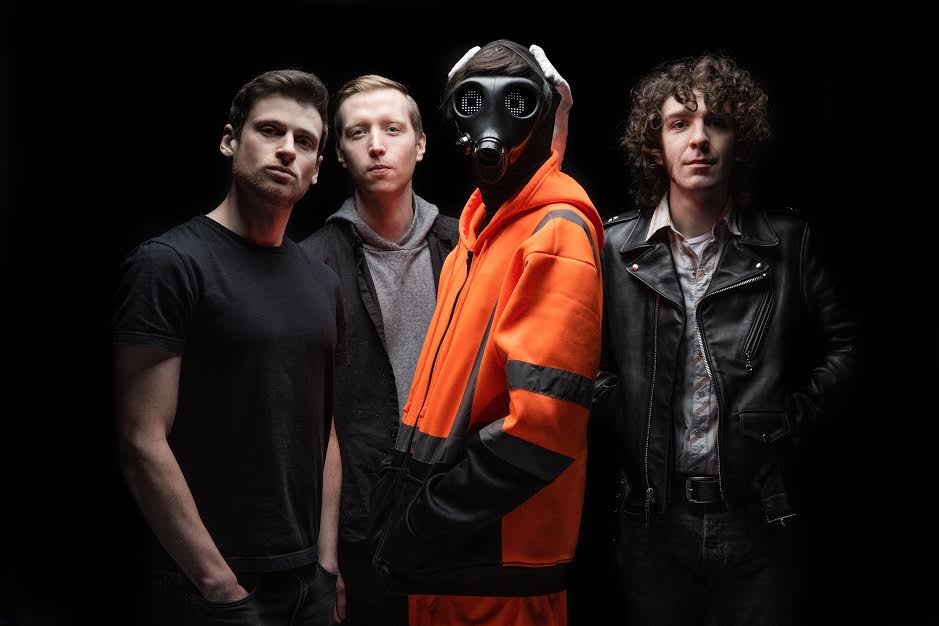 Car Seat Headrest’s Will Toledo has never been short on ambition. By age twenty-two, Toledo had already released eleven albums through Bandcamp, and some of the most definitive Car Seat Headrest songs clock in at over ten minutes. Despite only working on scales of epic proportions, Car Seat Headrest has managed to release their most innovative album yet, Making a Door Less Open. The recently released album has a unique track order and different versions of songs depending on the listener’s preferred music format, supplants the band’s signature guitar growl with electronic sampling and synths, and Toledo sings the whole album under a new persona. The voice heard on the album is Toledo’s alter-ego Trait, a gas-mask clad rocker with LED eyeballs who first debuted on Toledo’s 1 Trait Danger side-project with Car Seat Headrest drummer Andrew Katz. Despite experimenting with new sounds, Making a Door Less Open retains the driving pulse of the band’s best work, best heard on album standouts “Can’t Hold Me Down”, “There Must Be More Than Blood”, and “Life Worth Missing”. We reached Will Toledo in quarantine at his apartment in Seattle.

Northern Transmissions: Prior to recording Making a Door Less Open, you presented a PowerPoint to Matador of what the album would resemble. How similar is the final product to the one that you introduced on PowerPoint back then?

Will Toledo: We had been with Matador for a couple years by that point, and usually we just have a back-and-forth while the record is being made explaining a general sound or vision. This time I really wanted them to be prepared, because it seemed like these songs were pretty different from what we had been doing. I showed them four songs which were in-progress, three of which (“Can’t Hold Me Down”, “Weightlifters”, “Hollywood”) ended up on the record.

The fourth one was a song called “Stop Lying to Me”, which was a longer piece that we didn’t quite finish on time but is up on YouTube. Those songs were very different from each other, but I kind of liked having that wide spectrum to work around, and they formed the core of what I was thinking of for this record. Compared to some older songs, I found that there was some strange esthetic brewing up between them – they were kind of shorter and more concise than what we had worked on in the past. From that point on we worked to build those songs up and fill out the rest of the record with things that sort of complemented and added to this weird new spectrum that we were working with. On tour I see a lot of people on flights making PowerPoints for their jobs, so I guess I just wanted an opportunity to do that myself.

NT: This album has a lot more sampling, synths, and programmed beats than your previous records. Was there a learning curve getting used to translating your musical ideas through more electronic instruments?

WT: There’s always a learning curve whenever I take a new record on. My experience growing up was to throw everything together on the computer, and each time I’d go back to it I’d try to do a better job at it. I never had traditional schooling in production or arranging, so it’s just a matter of trying to get a little better each time. Teens of Denial was the first time we went into a proper studio and tracked in that way, so I had a learning curve of figuring out how the studio works and what we could and couldn’t do in there. I had worked on the computer before, but for this record I wanted to get my comfort-level to a place that it hadn’t been before. I learned a lot from Andrew Katz (Car Seat Headrest drummer) who helped out on the mixing of the record, because he has more of an EDM schooling and has been making music on the computer for a while.

NT: The first Car Seat Headrest albums were really just a solo project. Was it reinvigorating to have Andrew to bounce a lot of ideas off of? It sounds like he was pretty central in forming the sound of Making a Door Less Open and also has co-writing credits on some songs.

WT: For sure. Ever since getting on a label I’ve been looking for different people that I could bounce ideas off of. I want every record to be different, and the easiest way to do that is to work with different people who get me outside of my own box. I definitely wanted to use all my resources for this record, and there’s a lot of stuff that we kind of wrote together as a band just jamming out and seeing what works. Most of that didn’t end up on the record, so we have a lot of spare pieces left over. I think the next thing I’m going to do is look at those and see what we can do with them.

WT: We’ve been putting our albums out on vinyl and it wasn’t really a medium that I was familiar with, so it seemed like if we were doing it I should have some sort of idea of what I want to put on it. Many artists from the era where vinyl was the prime format really based their work around having twenty minutes of music on one side, then flipping it over and experiencing another twenty minutes. I started thinking that it gives the album a special feel when you know exactly what sort of time limits you’re working under and how to make those constraints work best for a listening experience. With that in mind I started sequencing the songs in a way that worked in filling the spaces from side-to-side, and then we put that track order on vinyl. Once that was out of the way I started looking at the CD and streaming versions, which are very different listening environments. I started thinking about needing to make something that feels a little better for those, and so we ended up extending those formats of the album by seven minutes and included some bonus tracks for the CD. I was trying to look at the different ways that people could discover the album and build a unique experience around all those formats. We included all the different versions of the songs if you purchase the Bandcamp download, because I didn’t want it to be like a collector’s thing and demand that people buy all the versions to hear the music. Listeners can play with it too, I’ve seen a lot of people making their own playlists with the track sequencing that they prefer. I think it’s definitely part of the experience to interact with the songs and make the album more of what you want.

NT: In introducing the Trait mask you quoted the Dylan line “if someone’s wearing a mask,he’s gonna tell you the truth…if he’s not wearing a mask, it’s highly unlikely” from the Rolling Thunder Revue documentary. Do you feel a difference between singing as Trait and singing as Will?

WT: I think I kind of have an easier time investing in the performance. I think it’s similar to how those old rock and roll singers didn’t necessarily write their own songs. You could have someone in the background brewing up material that was specific for a performer’s voice, and then the singer could forge their own connection with it. I find that singing with the mask really does make the lyrics and performance feel like two separate processes. Playing as Trait frees me up a little more to play around as a performer and sing stuff I’d otherwise find challenging. For example, on “Weightlifters”, the tempo and the speed of those lyrics are faster than what I’m accustomed to. Thinking of Trait as a separate character made it easier to just jump on top of the lyrics and deliver them the way they needed to be.

NT: In practical terms, can you sing the same way, or does the mask inhibit your capability to project your voice the way you’d want to? Can you even see out of it?

WT: I can see, and we’re currently working on a version of the mask that I can sing properly through. We’ve done a few shows as 1 Trait Danger with the mask I currently have, and it’s doable, but doesn’t sound the greatest. We’ve been designing a mask that allows for more sound to pass through and I’ll hopefully be sounding like I did before the mask.

NT: It might be a long time until we’re all going to shows again, but of the new songs which ones were you most excited to see transformed in front of an audience?

WT: We were getting some good reactions already to “Can’t Hold Me Down”. We had been playing “Weightlifters” in a more rock way when we tried it live, and I think it would be cool to see if people respond differently if we play the more synthy version. I think “Hollywood” would be a really fun track to play live too. I think for “Deadlines” we would put something together that combines the three different versions into a longer dance thing that people can get into.

NT: Were you thinking of wearing the mask for the full shows, or playing the new songs as Trait and the old songs as Will?

WT: We were practicing some older pre-Teens of Denial songs that we had never performed before we got stuck indoors in quarantine. I was looking at performing as Trait as a chance to pull up older songs that had a synth element which fans might not be expecting to hear. The plan was to play a few things from Teens of Denial, but most of it was going to be new or unplayed older material. I’m just excited thinking about the day that we’re all back together and people can interact with the new songs.