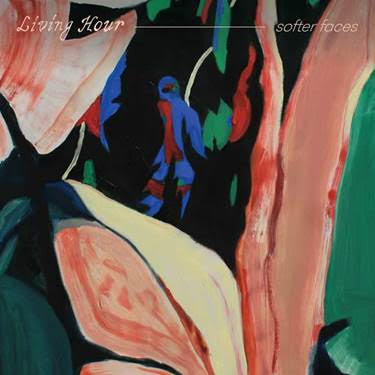 There’s something about humble origins that breeds the loftiest dreams. Such is true in the case of South Winnipeggers Living Hour, who just as soon as 2015 started in a basement as a four-piece project. Since the release of their self-titled debut LP in early 2016, they’ve expanded to a quintet, further elevating their romanticized dream pop for their sophomore record, Softer Faces, out March 1. Led by the husky vocals of Sam Sarty, Living Hour incorporates noodling guitar melodies, bursts of horns, and brave rhythmic shifts to create a dense wall of sound too lovely to pin down as shoegaze—it’s a very defined and powerful sound with a consistency across Softer Faces’ nine tracks.

Album opener “Hallboy” counters Sarty’s smoky, drawn out vocals with odd-time drums (is that a 13/8 time signature I hear?!) that keeps the song trotting in ever-quickening circles. Dual guitars ebb between consonance and dissonance, splitting and rejoining before all the instruments crash into a wave of cymbals and trumpets. Throughout the album, a similar trick is used, teasing towards and away from inevitable climaxes, giving way to guitar solos (“Before You Leave”), trumpet solos (“Bottom Step”), or three-piece vocal melodies (“I Sink I Sink”). And though certain tracks ride the lines of beachy jangle pop, like “Before You Leave”, or the organelle-driven gospel undertones of closer “Most”, the sonics don’t switch up too much, making the whole
record feel more like a continuous, 40-minute track. At times, the expected swells are impressive, like the fanfare burst in “Slow Shines” or the stop-and-go outro on “Inside”, though the sound palette on many tracks don’t really distinguish themselves enough or reach the emotional heights their buildup promises, like the somber “No Past”, which opts to reach a lyrical climax with the Sarty’s chant of “I am enough.”

Lyrically, Softer Faces is primarily about repeated loves, mistakes, and heartbreaks. It’s pretty minimalist, though there are sparks of intense clarity and emotional elicitation among the sighs and moans, particularly in the album’s standout track, “Bottom Step”, about rekindling the passion found sitting together on the stairs at a friend’s party, contrasted by haunting solitude—dreaming of “the highs and lows / of the hellos / I’ll never know.” Much like the tidal sonics of the album, the vocals either lead strongly or sink beneath the instrumentation, and besides the first few tracks, most of the lyricism is too nebulous or moves at too slow a crawl to evoke the emotions to match the album’s sound. Hearing the concrete imagery in “Bottom Step”—“the red glow / from the third window / it gives you a halo”—I found myself wishing the consistency came from that instead of the repeated, sometimes sluggish swells.

Softer Faces is a beautiful album. Rich production gives glimpses of syrupy sweetness, however the relentless spaciness, particularly in the album’s latter half, feels a little more hollow than dreamy. Still, the clever toying with rhythm and incredible band synchronization on the highs make it a worthy listen. Standout tracks are “Bottom Step”, “Hallboy”, and “Inside”.