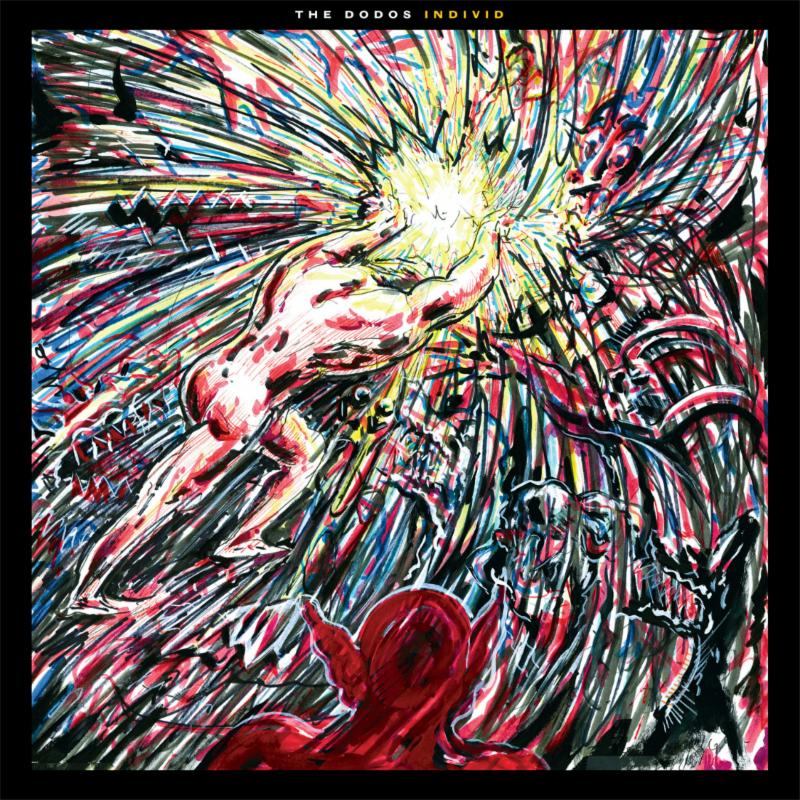 Meric Long and Logan Kroeber of The Dodos are alive and kickin’ and ringing in the New Year with studio album #6. It comes quick on the heels of 2013’s Carrier and was recorded at John Vanderslice’s Tiny Telephone Recording studio. Individ showcases Meric’s and Logan’s musical chops at their most aggressive while retaining Meric’s emotionally questioning, yet limpidly delivered vocal style.

The indie-rock duo has gone full-bore rock on most of the songs of this album, whipping up a relentless energy through ever-changing, punishing drumming time signatures and simpler, repeated, distorted guitar refrains. Meric and Logan create musically tight arrangements, but they’re so tight and frenetic that they don’t leave much aural breathing room. The result of an album’s worth of such unremitting agitation on the listener is weariness and frustration instead of exuberance and elation.

“Precipitation” foreshadows many of the songs with its kinetic, percussive rhythms, click of drumsticks, pushing guitar notes, jingle of tambourine, and build-up in sonic intensity. A slamming beat propels the song forward, while Meric sings, and even exclaims, in a vocal tone that seems to not be touched by the surrounding turmoil.

This dichotomy between Meric’s mellow, slightly downcast vocals and the stoked, super-speedy drumming and grinding guitar cycles makes is aurally perturbing. Add to that an overlay of off-kilter metallic noises and the mix becomes overwhelming. The album artwork is an apt visual descriptor of what’s to be found within its cover!

Certain tracks, or parts of them, let up on the forceful momentum and it’s a nice respite to hear finger-picked acoustic guitar on “Darkness”, the sweet sway of “Competition”, Meric’s dreamier vocals on “Bubble”, and the slower pace of “Bastard”. That’s not to say that the emphatic, ramped-up drumming is a bad thing; it’s actually pretty interesting and exhilarating in low doses; it’s just extreme over the course of a whole album.

“The Tide” uses pummeling drumming and the fast clink of metal to good effect, gearing up the heart rate amid fleeting reverb guitar and distorted, ringing guitar lines. Meric sings in a smooth, light tone, casually asking “Are we on the brink of disaster?” The first single off the album, the afore-mentioned “Competition”, is a breezy tune rife with brief and rapid guitar riffs that stick to a narrow sonic range and short-phrase lyrics. Meric intones with melancholic hopefulness “If I let you go, could I forget you?”

An engaging, island-vibe aura radiates from the “Darkness” due to a lightly thumped beat, slide guitar sound, and shaken and clacking percussion. While Meric sweetly repeats the bleak lyrics “Darkness was over him.”, female vocals (from either or both Brigid Dawson of Thee Oh Sees and Minna Choi of Magik*Magik Orchestra) swoop gently through the song. A rising, but riveting tempo change surprises at the end of the song, with quick-picked guitar notes, hard-hit guitar riffs, and wordless vocals providing uplift.