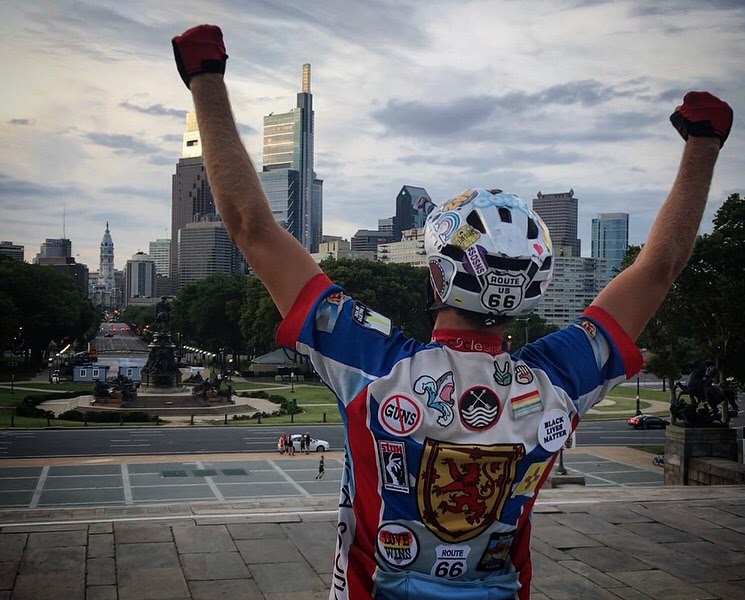 Rich Aucoin, recently shared his new single “Reset.” Aucoin wrote the song and his new album United States, after observing the country from ground level, while cycling across it for Mental Health America (as well as the Canadian Mental Health Association). While taking this Robert Frank approach, Aucoin composed a song for each of the 12 states he pedalled through. The record is as much about the current socio-political climate of America as it is about states of consciousness; as much fuelled by the burgeoning American protest movement or Hedges’ social commentary as it is fuelled by McKenna/Pollan world of psychedelics and meditation apps.

“I wanted to really see the states alone as an observer with lots of time to process the experience. I’ve loved touring there and was interested in how such a progressive country could elect their current president. After cycling through town after town with decaying downtowns where photos were displayed in the local cafes showing the town in full bloom after the second world war, I could see how his propaganda of ‘Make America Great Again’ really conned people. I spent a lot of time on social media and alone over those months and could see how the states had re-entered a period that felt like the late-60s again with both a resurgence in student protest movements and a renewed interest in psychedelics. I was also meditating a lot and thinking about these things while riding.”

Because of the restraints of COVID19, Aucoin returned to the chopping of over a 100 news reports for the video. The video features reports on all the mass-shootings that have occurred since Aucoin started his cycle tour which tally to 36. Like “How It Breaks”, it’s a call to action and demonstrates the efforts being made by the thousands of students across America who will one day change gun legislation in their country if those in power do not help them at this moment. “In going through the hundreds of videos, it reminded me of how often these shooting happen in America and that there’s such a large number that many shootings now need to have a year next to the city’s name to differentiate between them and the mass shootings which have occurred in the same city the year or two before. The shootings have occurred in all types of places and events from a Waffle House and Walmart to a Youtube headquarters and EA Sports Competition. I wanted to remove guns, victims and shooters from the video and have the focus be on protest in response to events. Guns sales go up during times of fear like after a mass shooting or now during the pandemic and so this is an important time to refocus the attention to dealing with the epidemic of America’s gun violence as they continue to rise. Suicide also accounts for the highest number of deaths by guns and I wanted to shed light on that problem as well as the mass shootings occurring frequently. One thing I wish there was more footage of, to include in the video but was impossible to find, was discussion around toxic masculinity and violence against women as many of the shootings include domestic violence at their onset. There is lots of messiness in the discussion of gun violence and mental health as well as both sides seem to be using different dictionaries for their terminology. The NRA is a lobby group masquerading as a civil rights organization but, just as the Tobacco Institute (TIRC) was dissolved in 1998, hopefully the NRA will be deemed unconstitutional as well. Finally, I wanted to block out the guns of this video in the way I blocked out the president in the previous video but wanted to find an object which would demonstrate the desensitized way we see weapons, I picked the dildo because it seems out of place for someone to be showing it off in public and yet the dildo is an object of pleasure not a weapon of death. We should have a bigger reaction to seeing weapons of death being allowed to be touted around in the name of freedom. Working on this was especially difficult in the weeks post the deadliest mass shooting in Canadian history while myself and the rest of the community all reflected on what was happening all around us.”