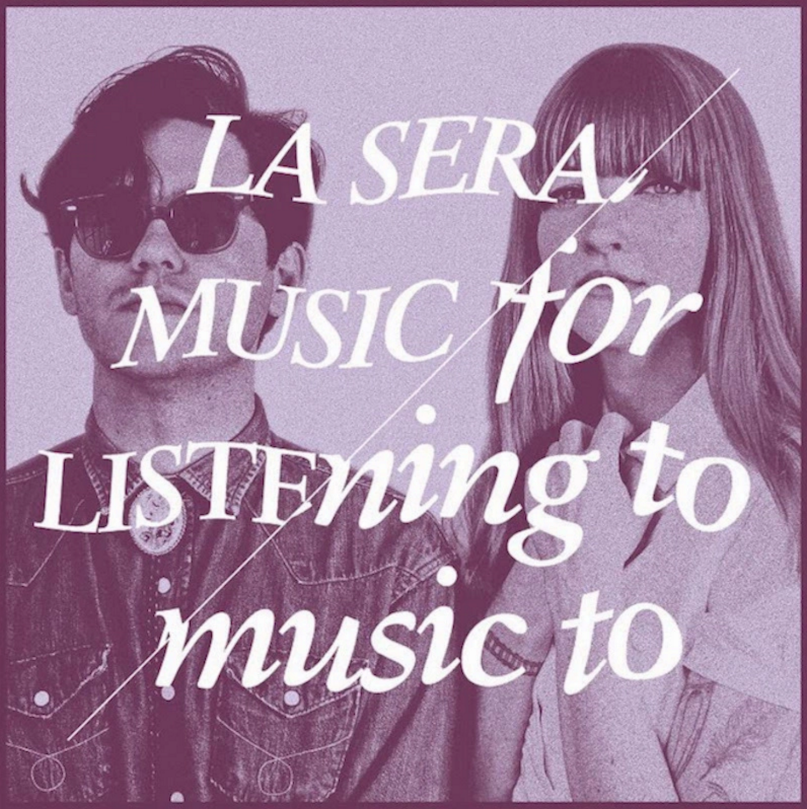 Music for Listening to Music to

“We are not the same as we used to be,” Katy Goodman sings with a tinge of wistfulness four songs into her La Sera project’s fourth full-length album, Music for Listening to Music to. The song, “Begins to Rain,” finds the project founder detailing time gone by, yearning for the company of someone that’s since split for life on the road. But, unlike the feel of this particular jangled-up weeper, change has done plenty of good for La Sera in recent times.

Since issuing 2014’s Hour of the Dawn, Goodman got married to guitarist Todd Wisenbaker and fleshed out the one-time solo project into a collaborative songwriting duo. To be fair, Wisenbaker had been in the band since 2012, and produced Hour of the Dawn, but this latest effort is the first to feature him in a larger songwriting capacity, as well as the first to deliver male vocal leads. That said, Goodman steals the show straight out the gates.

Opener “High Notes” sets the tone for much of the LP, bringing in a distinct country and western influence previously untapped on La Sera records. As it stands, a fairly speedy, boot-scootin’ shuffle-and-strum support Goodman’s crystalline vocals on the piece. A personal paean, it envisions a fictional concert scene where Goodman promises to comfortably “hit the high notes,” and make you cry with a sad song while wearing a smile on her face. This song, mind you, is a jumped-up kick-off to the LP, but she’ll deliver the bluer bits a few songs down the line.

“A Thousand Ways” takes a more familiar approach, diving into the super-sweetened, key-changing sounds of ’50s pop ballads. The song presents love as something that can easily bring you down or save you, day depending, and knocks down the more melancholy aspect of this
conundrum with some Johnny Marr-inspired six-stringing.

Even without that track in mind, it’s clear that the Smiths are appreciated by the band. The sigh-worthy slink of “One True Love” sounds like it could have easily been a prime cut from the UK outfit, were it not for the sparkling boy/girl vocals of Goodman and Wisenbaker. Similarly, the pre-chorus to late album piece “Nineties” suggests Wisenbaker was once sixteen, clumsy and shy, or at least a big fan of Morrissey and Marr’s “London.”

While flirting with vintage overseas college rock, the album also reveals a deft love for ’80s country -mutators the Gun Club. “I Need an Angel” straight-up cooks with its mix of reverb-slippery riffs and twangy vocals, while “Time to Go” is a moonshine-pounding punk stomp juxtaposing Goodman’s refined vibrato with growling slide guitar and a 100 proof punch of percussion. That Americana idol Ryan Adams produced the record feels fitting.

“Shadow of Your Love” plays things a bit more traditional for the C&W crowd. At first, it focuses on preciously picked tones and Goodman’s vocals, which praise the sound of a pedal steel guitar. Pleasingly, La Sera pull off the album’s most poetic move by not actually bringing in the steel-scraping slide of the instrument into the arrangement, opting to let the cow-print aura of the lyrics speak for themselves.

Since starting off as a solo side-project for one-time Vivian Girls bassist Goodman, La Sera has been a rock solid and pleasing pop project. The evolution into its current incarnation has fantastically brought out a few more influences to the mix, with the western-tinged tones contributing greatly to La Sera’s most well-rounded release yet. Goodman’s “we are not the same as we used to be” from “Begins to Rain” sounded a bit sad, but it’s got to feel good to be in La Sera right about now.