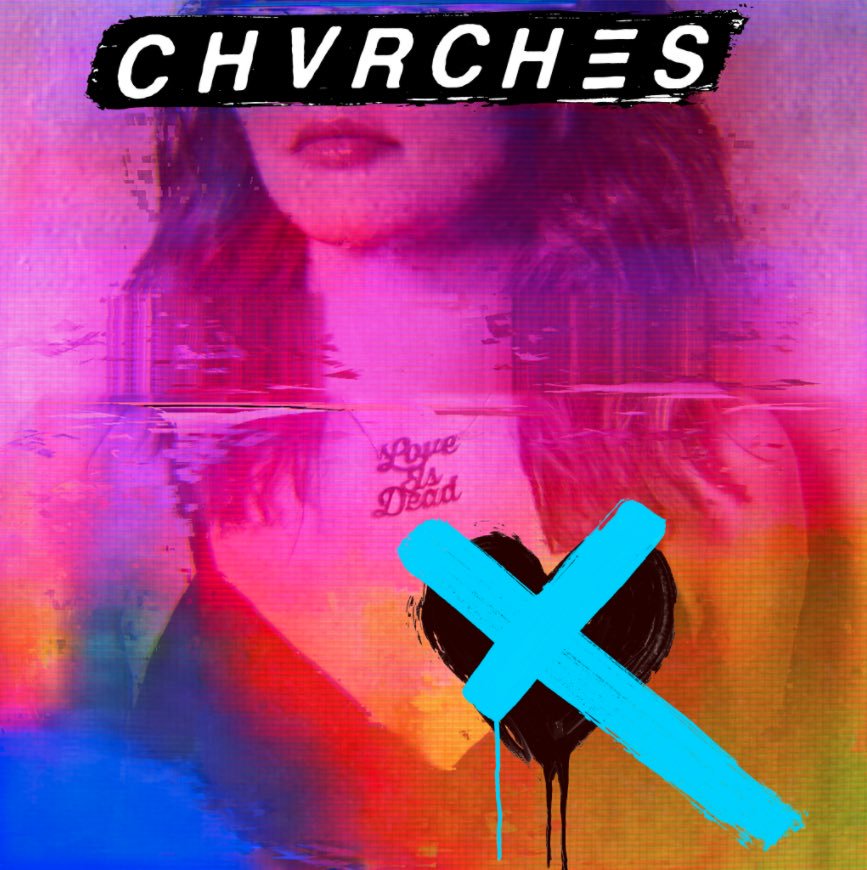 For the last 7 years, CHVRCHES have been infiltrating our collective lugholes like an electro-pop trojan horse thanks to their bitter-sweet mix of playful synths and melancholic lyrics. For album three, ‘Love Is Dead’, the Scottish trio have opened up their once impenetrable, inner sanctum to collaborate with super producer Greg Kurstin – the man behind the colossal hits of Adele, Sia and most recently Foo Fighters. It goes without saying, CHVRCHES’ pop leanings have been given the A-List treatment, meaning that ‘Love Is Dead’s trojan horse is all bejewelled and fancy on the outside but on the inside its weapons’ are drawn, ready to attack.

‘Love Is Dead’s enormous sense of scale is hard to ignore, it’s a record custom built for arenas and stadiums. It’s not hard to imagine some of the tracks give the likes of Taylor Swift and Ed Sheeran a run for their money given how anthemic CHVRCHES sound. What’s noticeable is that where debut LP ‘The Bones Of What You Believe’ and sophomore album ‘Every Open Eye’ leant towards a dancier aesthetic, with pounding drums giving tracks a perpetual motion; ‘Love Is Dead’ dials down the throbbing core of past albums for broader, synth brushstrokes with the pace coming down a notch. With the pace set to a more leisurely speed in certain places, the injection of massive choruses and rushing crescendos give the Glaswegian’s new effort an ‘arms aloft, lost in the moment’ festival feel. Although if you’re thinking these are big, dumb pop songs, you’d be wrong, as underneath the new-found sheen there’s a tectonic melee of shifting glitches and digital nuances and of course, Lauren Mayberry’s sweet yet barbed vocals. ‘Forever’ is the epitome of this, it’s got it all: a sing- along earworm core, crystalline synths and chopped vocal ticks – you can almost picture a main-stage festival crowd hollering along to “you will never see my sign/and I will always think I’m right/but I always regret the night I told you I’d hate you until forever”.

When it comes to themes ‘Love Is Dead’ is a mixed bag, touching on tales of faded nostalgia, tumultuous relationships, a dip into socio-politics and several references to religion. The latter is the most prominent with
the likes of ‘Deliverance’s twinkling synths framing Mayberry’s words “careful when you’re swimming in the holy water/drowning in your own beliefs” which lead to the first of many gigantic choruses. ‘Heaven/Hell’ is where the record merges subtle, slow-burning glitchy noises before swelling to an anthemic rush. ‘God’s Plan’ opts for a more leftfield, darker tone as Martin Doherty takes over on lead vocals. ‘Miracle’, with its r’n’ b swing and crunching post-dubstep sound has Mayberry “looking for angels in the darkest of skies”. In true CHVRCHES fashion, ‘Graves’ is the most upbeat track but the most chilling when it comes to Mayberry’s wordplay. It’s a banger of the highest form but amongst the thumbing drums and sci-fi synths you can hear our protagonist observing omnipresent injustices “they’re leaving bodies in stairwells/or washing up on the shore” in a damning statement hurled at those in positions of higher power. In a vehemently combative way Mayberry practically yells the hook line “you can look away/while they’re dancing on our graves/but I’ll stop at nothing” with every ounce of her being.

CHVRCHES may think that ‘Love Is Dead’ but on their third album it’s very much alive and in tip-top health.