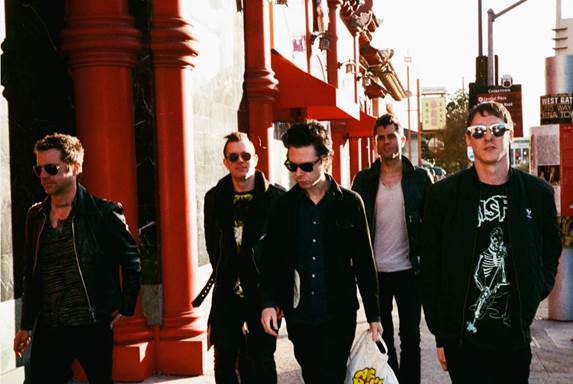 Head Wound City, featuring members from The Locust, The Blood Brothers and Yeah Yeah Yeahs have released their new video for “Born to Burn”. The track comes from the band’s latest release A New Wave of Violence. The album is now available via Vice Records.

After a lengthy North American tour with Savages, Head Wound City recently announced a handful of new shows, including a stop at Saint Vitus in Brooklyn, NY on September 17th and FYF Fest in Los Angeles on August 28th.

Formed in 2005, Head Wound City is made up of members of The Locust, The Blood Brothers and Yeah Yeah Yeahs. All come from diverse backgrounds, steeped in metal (thrash and grind in particular), goth, and every permutation of hardcore and punk imaginable. HWC are loathed to get into direct musical comparisons, knowing that any band used as a frame of reference will be written on their tombstones. Yes, the shadow of The Birthday Party looms, as if Nick Cave was raised on powerviolence and a Classics Illustrated version of the Old Testament. Or maybe it’s the sound of powerviolence conceived brats who were listening to “Mutiny in Heaven” when they should have been reading their scriptures.

‘A New Wave of Violence’ is available for purchase now here.