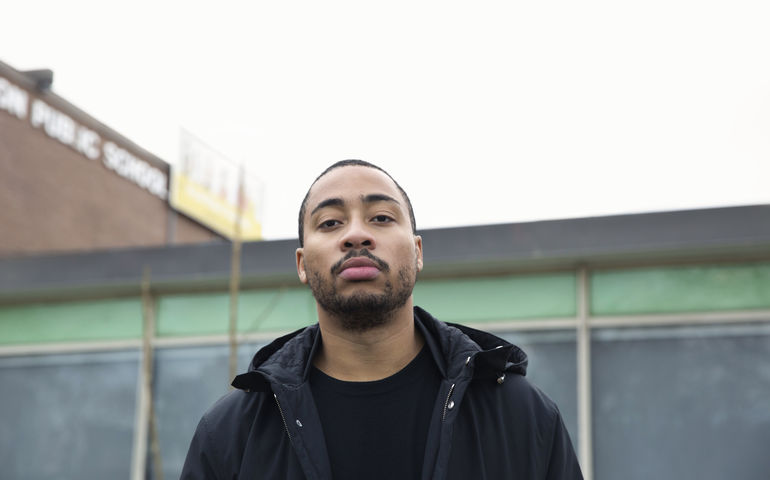 Cadence Weapon has released a rap version of his new single, “Jackson Pollock.” The track was produced by Toronto’s own Grandtheft. Earlier in the year Cadence Weapon released his self-titled album via eOne Music.

“Grandtheft and I randomly got together in the studio in Toronto and built the track from the ground up. We wanted to make something that mirrored the frenetic energy of our live shows,” Cadence says of the collaboration. “After GT came up with the beat, I knew I wanted to write something that had an epic, celebratory quality to match the production. It’s an art rap song that makes references to famous visual artists but also touches on the intersection of art and commerce in the world of music.”

The song arrives after a hectic year for both artists. Cadence just wrapped an extensive North American headline tour with Montreal’s Hua Li and Houston rapper, Fat Tony, after a long European run of the summer festival circuit. The cross country Canadian tour featured shows in Vancouver, Calgary, Edmonton, Saskatoon, Montreal, Fredericton, St. John’s, Chicago, Philadelphia, New York, Virginia, Boston, and the revered Halifax Pop Explosion in Nova Scotia. Cadence performed at NextGen City Jam in his hometown of Edmonton last week. He returns to Toronto this month, taking the stage with Jacques Greene at CBC q Live For The Holidays on Wednesday, December 12 at The Great Hall, and will be ringing in the New Year with a performance at Nathan Philips Square on Monday, December 31.

Cadence has been teasing new music on and off the stage for a few months – this summer, sharing infectious single, Be About, produced by Eytan Tobin, of the Bedroomer music collective, and some new sounds from a forthcoming project with Jacques Greene.