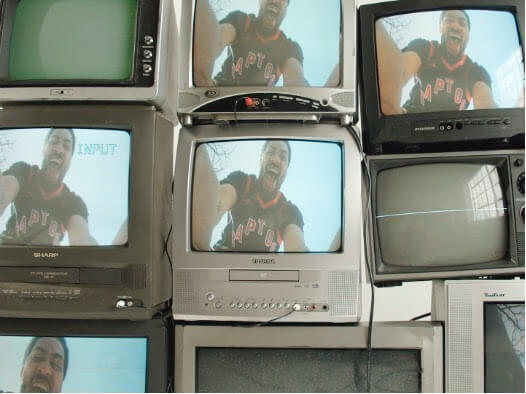 Cadence Weapon, has shared a video for his track, On Me, featuring UK Grime MC, Manga Saint Hilare, produced by Australia’s Strict Face. The visual was directed by Cadence’s long-time collaborator, Scott Pilgrim “On Me” is a cross-pond collab between Cadence and Manga – the video is inspired blend of the lyrical content and track themes, highlighting security and surveillance, some of the many topics Cadence examines within Parallel World, continuing a mission to spark change and conversation through sonic messaging and seeks to unearth the alternate reality that lies beneath the surface of our society.

For the treatment, Scott says: “Working on ON ME was an opportunity to blend concept and purpose. Since our artists weren’t able to be in the same room together, we needed to find a way to unify footage shot in Canada and the UK. Taking from the themes of surveillance from the lyrics of the song, the TV motif was the perfect object for connecting the two rappers performances.”

“When I wrote On Me, I was inspired by reading about how face recognition technology was being used by law enforcement and then that got me thinking about the myriad ways surveillance has become normalized in everyday life,” Cadence says. “It was amazing to get Manga on the track because he’s a grime legend and member of Roll Deep and I was really inspired by them back in the day. This song is musically a homage to classic grime, a genre of music that has been prosecuted and surveilled from its inception.”