Roland “Rollie” Pemberton has been making clever hip hop as Cadence Weapon for over a decade, but he felt that he wasn’t representing himself honestly anymore. Inspired by his years DJing in Montreal, Pemberton took his newfound work ethic in Toronto and reinterpreted it on his powerful self-titled album. We caught up with Pemberton ahead of his Montreal set at L’Astral on March 31 to talk about starting again and how he met Kaytranada.

Northern Transmissions: Is your reintroduction through this record why you’ve made the album so autobiographical, or was that more a result of personal reflection at the time?

Rollie Pemberton: In the past my songs have been pretty autobiographical, but the difference here is that it’s a lot clearer and more concise. On my earlier work I’d talk about people and situations but the language was woefully obtuse, I went out of my way to obscure things. What I found in maturing, was this ability to reflect upon my history and find this knowledge of self. The album is all about that exploration of the self.

NT: How did Kaytranada get involved as a producer on the record, and what did they bring to the album?

RP: For the Kaytranada track, we had been DJing in a club in Montreal together well before he’d put out his remixes or album, so I wasn’t super familiar with him. He played, and every track he played was just incredible. After his set, I said “Hey man, what were you playing?” and he just said “I made all that.” I knew we had to work together, so I hit him up, he sent me some beats and ended up picking the one that would be “My Crew.”

How did your time DJing in Montreal at after-parties influence your direction on the album?

RP: I really feel like DJing has informed my music. I started getting into club music and learning how to mix songs. Building up to this album, my time in Montreal was a total whirlwind of parties. I went from not knowing anybody, to becoming one of the main after-party DJs in the Mile End. I would throw events, and have different monthly poetry events. A lot of my experiences in those late-night environments inspired songs on the album. “My Crew” is a song that was made to be played in that environment. “The Host” is about that environment, and how some people take advantage of the social capital they have as a host.

NT: Alternatively how has your move to Toronto inspired you in your work whether it just be a mindset or a way of working?

RP: It’s funny, despite the fact that I’ve been putting out albums for a few years, moving to Toronto opened me to the industry in Canada. I didn’t really know the people or how to navigate the business side. Now I’ve become well-attuned to that, living in Toronto. Leaving Montreal is such a bittersweet thing, because I still have so much love for it. My time here has been reflecting on that time, to articulate what happened in the past. “Five Roses” with Blue Hawaii is a reflection on those early times with all these different musicians. It really felt at that time like we were a New York music factory like in a movie, everyday. We wanted to give people the feeling we felt at that time.

NT: I also heard you ended up writing 80 songs for the album initially, what pushed you so far and how did you narrow that down?

RP: It wasn’t a conscious decision to make that many and narrow it down. I’d be recording x-amount of songs per week, and then I just kept recording. When I looked up, I saw how many songs that I’d finally made. There’s a lot of kinds of songs on this record, and I brought out a lot of different feelings on this record by making a lot of different versions of one song. I was refining a style over and over until I got the song that I wanted. A song like “Large” came out of some trap tracks I’d made before but then I got a beat, and it came together really quickly. Generally I’d have good feelings about songs and come back to them, but a lot of the songs that made the record were some of the last ones I made. 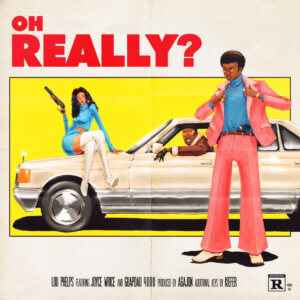