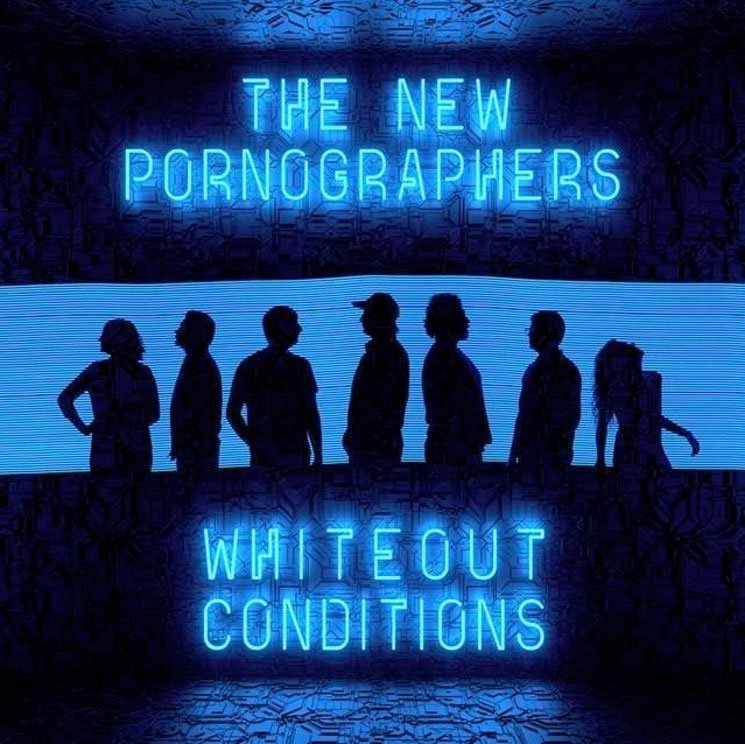 Harnessing the creative force of a band with as many members as The New Pornographers is no easy feat but they have consistently managed to avoid a bad album for some time. On their first Dan Bejar-less album the group truly enter their electronic phase without the hesitation found on Brill Bruisers. Taking the next step in their evolution the band once again craft an album of solid tracks, although it may not be their most memorable record to date.

Launching full-steam into their electronic sound “Play Money” almost deceives with its bongo backing track, but there’s no denying the digitized tone the guitars and voices carry here. Between Case and Newman’s vocals there’s sense of life out of the electricity that keeps it from sounding too dystopian, and the final chord shifts find the band right in their quirky groove. Shifting further into the ether, “Whiteout Conditions” bubbles with techno-fueled synth lines and fiery harmonies. Although a powerful chug and with some true beauty in its final howls, it’s intensely repetitive and does feel to have run its course several times over by the end.

Clearly given a ton of attention, “High Ticket Attractions” feels like just that as a track on the album. With the catchiest melodic hooks on the album, endless melodies and parts flying every few seconds, its triumphant in its energy and merges the electronic sound with the band’s vibe better than many of the tracks on the album. In retro-filtered greatness, “This Is The World Of Theatre” has a uniquely lovely timbre to its leading hook, accented by the quaintly toned notes that permeate the track. The with euphoric vocal lines falling in and out of each other in beautiful synergy, the playfulness of the track give it more rock heft than other tracks on the record.

With a distinct attitude to its guitar tone, “Darling Shade” steps in loud and proud, taking floating synth loops with power chords organically for a very hopeful futuristic sound. Between the crashing pre-chorus hooks and the drum and glitch blaring bridge the New Pornographers’ ability to make even rock sound classical seems to be have no end. Strangely cut-off harmonies on weird time signatures are truly just par for the course by the time you get to “Second Sleep” and its rumbling key lines. The band manages to hold the mood elegantly through massive musical changes, made all the more impressive considering the size they now operate under.

The rumbling bass and xylophones blend perfectly in only a way this band knows how on “Colosseums.” Between rounded cries of soothsayers, electric melodies flourish with aggressive push but ultimately the track burns its fuse too quickly. “We’ve Been Here Before” pushes the bands powerful harmonies to great emotional effect, as key lines race back and forth, and power notes blare out ominously in the background.

The infectious groove of “Juke” blends with the harmonious melodies and glitchy background effects to make the most New Pornographers sounding track on the record, feeling like the most true evolution of their sound. The looping bridge, with a bubbly melodic hook also adds a cool instrumental parallel to the band’s iconic vocal loops. “Clockwise” goes for a straight chug, contrasted with vocal stops and the song’s distant filter to give the vocals a spiritual quality. Closing on the barreling “Avalanche Alley” they pull every last sonic stop they have, mixing electronic and natural drums, just like with their vocals and melodic instrumentation. The track’s epic tone gives it definitive sound, appropriate to close the album, saving it from otherwise feeling like just another fast song.

Without a bad song in the bunch, it’s hard to complain about Whiteout Conditions, but with memorable moments few and far between and most song’s coming out just better than average, it never hits the same amount of highs as even their previous outing. Consistent in tone however, this feels much more like a record that will earn its keep in live outings, with the overall sense of the songs leaning more that way. The band does however prove their chameleon ability to shift tone, meaning we can expect something a lot more interesting creatively from them on their next record now that they’ve adjusted to their new sound.