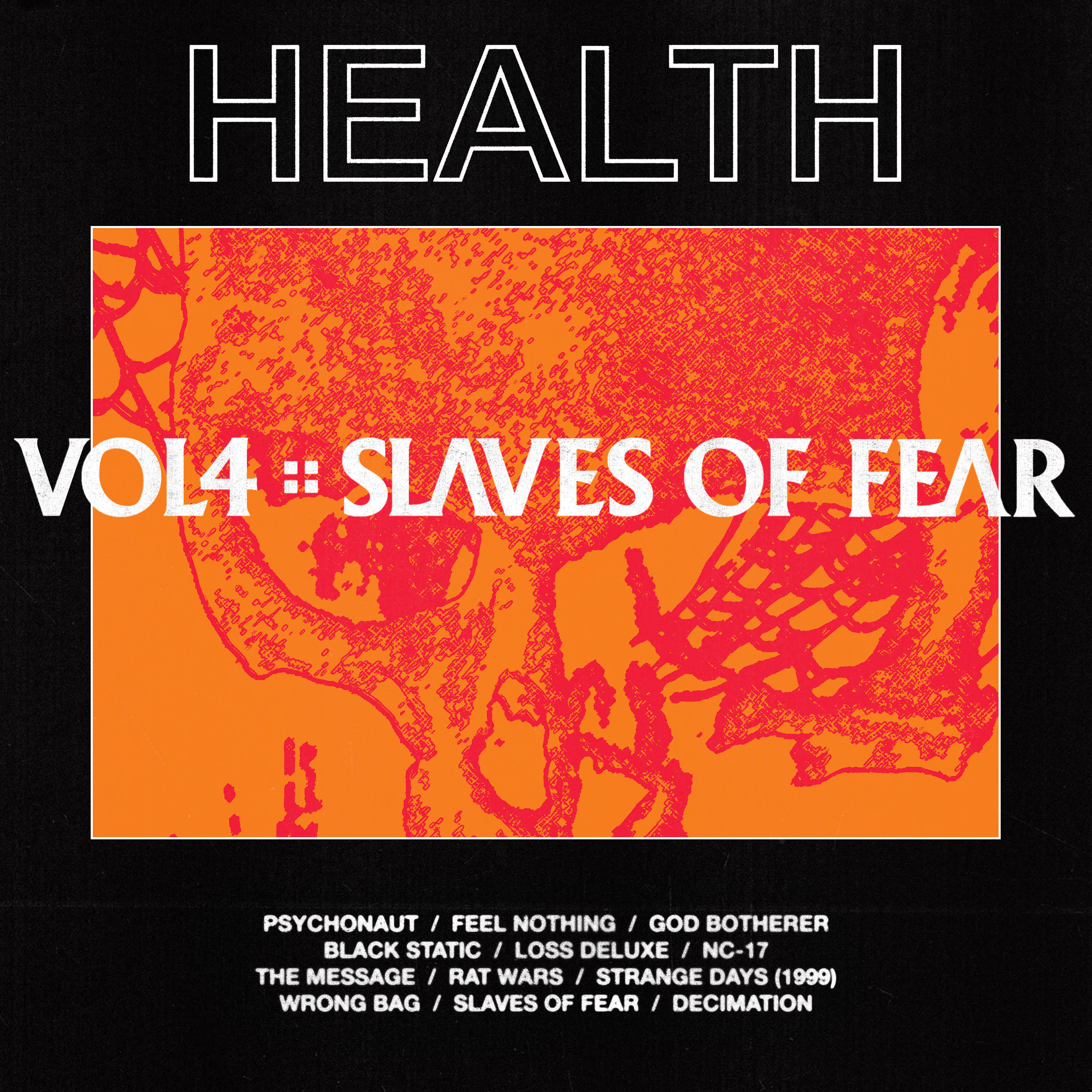 You know you’re in for a hard-hitting record when the creators describe it as their “heaviest, most genre obliterating album” to date. That’s HEALTH, the purveyors of all things noisy and chaotic, like a cyberpunk rock band staring the apocalypse in the face, battling rampant cyborgs until the sun is extinguished.

‘VOL. 4 :: SLAVES OF FEAR’ has the trio crowbarring in nasty thrash metal missives and “Arabic bass music dragged through hell” to forge a sonic onslaught that’s both intense and claustrophobic; it’s an aural attack that wraps itself around Jake Duzik’s (vocalist/guitarist) calm, almost emotionless vocals. Whilst the war is being waged, Duzik is front and centre, documenting the carnage, as if completely detached from the volatile melee that has him enveloped.

You could say the three piece’s fourth outing is a dystopian view of future life, and with the digital-punk of ‘VOL. 4 :: SLAVES OF FEAR’ this rings true but Duzik’s lyrics aren’t a prophetic document of days to come, they’re very much centred in the now. ‘FEEL NOTHING’s industrial death march has the band’s mouthpiece announcing, “we didn’t choose to be born” and “why should we try so hard/let’s get numb”. The juddering mechanical awkwardness of ‘STRANGE DAYS (1999)’ echoes a paranoid outlook “where will you be when they come?” as if to illustrate door to door death squads instructed to neutralise human life. The record’s eponymous moment is the most transparent track on ‘VOL. 4 :: SLAVES OF FEAR’, with HEALTH’s main man declaring we are “slaves of fear from the moment we’re born” as the sonic levels pendulum swing from tense and calm to violent and unpredictable – imagine a vision of rock music from 1983 but what 2100 would sound like and you’ve got ‘SLAVES OF FEAR’ summed up.

When it comes to “obliterating” music genres, ‘VOL. 4 :: SLAVES OF FEAR’ definitely doesn’t blur musical borders, it vaporises them. ‘PSYCHONAUT’ crushes Spanish guitar trills underneath colossal earthquake-like drum beats, while industrial metal and corrosive synth patterns cross malfunctioning lightsabres. A post- dubstep world is turned inside out on ‘GOD BOTHERER’, while ‘WRONG BAG’ is where violent electronica cross pollinates with pockets of celestial calm. The record is bought to close by the ‘guitar ballad’ of ‘DECIMATION’, which takes on the guise of a hymn rather than a song. Brain frazzling synth discordance is replaced by subtle, atmospheric textures that lend themselves to a cinematic feeling of hopelessness. With genres and pigeonholes left smouldering in their wake HEALTH are very much in a league of their own.