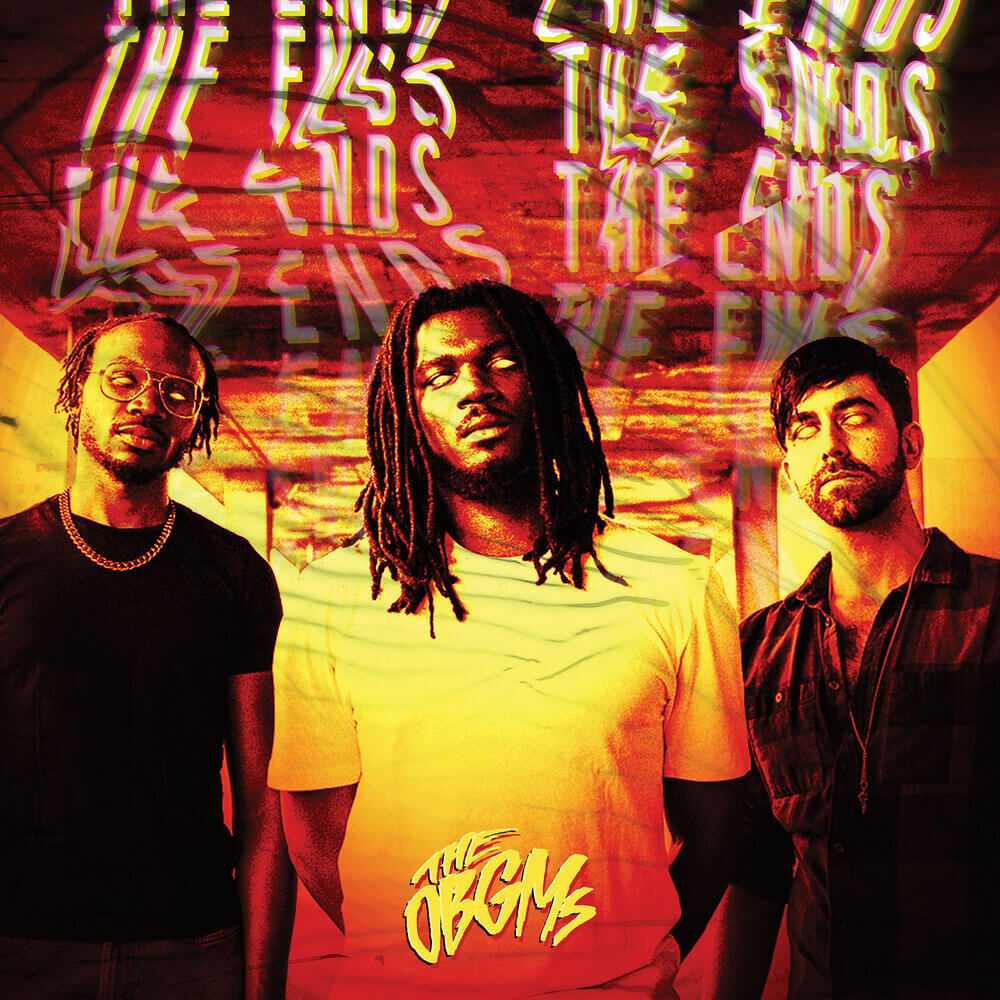 In February 2018 it seemed like The OBGMs were done; they’d just finished touring their self-titled album and Densil McFarlane (guitarist/vocalist) had hit the wall. When speaking to Northern Transmissions, McFarlane put it plain and simple: “I had to take a break. Honestly, I was not happy with where we were in music, and the process of making music wasn’t conducive [to a way that] could be successful.” So, to be reviewing the trio’s sophomore record two years later seems like a landmark moment. After toiling away through tonnes of phone voice memos and sketches of song ideas, the Toronto punks have created the barn-burning racket ‘The Ends.’

McFarlane is pretty open about his previous work being quite appreciative, in the terms of where the group found themselves at the start of their careers, whereas their second LP is a defiant line in the sand, that stakes its claim that they deserve to be making music and vying for attention in their hometown, as well as the rest of the globe. ‘The Ends’ is The OBGMs saying, “hey, we’re here, and you’ll fucking listen to what we have to say.”

To say the three piece’s latest outing is combative is something of an understatement; opening track ‘Outsah’ opens with McFarlane slurring “I’ll fuck you up” over a guttural groove and a funky bongo motif. When the track lurches into a feral punk swagger, the band’s mouthpiece can be heard yelping “you can meet me outsah” like a man ready to fight any takers. This parting shot sets the tone for ‘The Ends’, as a record that clocks in at 24 minutes and traverses 10 tracks, it’s lean, mean and ready to rumble. I mean, track four is called ‘Fight Song’ if that’s not a statement of intent, I don’t know what is?! The Canadian troop’s second offering is littered with direct gut punches and bullish statements; ‘Triggered’ contains the squawked “I don’t give a shit”, as a wall of bombastic punk rock rages with a wide-eyed funky menace. ‘WTFU’ may dial down the pace a little but it’s still revved up, and the group’s protagonist is very much in combat-mode, as typified by the in-yer-face “hello/who the fuck are you?” and the acidic “I hate myself but I hate you more”. ‘All My Friends’ is a track that references it’s love for Toronto but in the same breath reflects on the frustration of not being recognised yet by the city that’s founded The OBGMs. It’s pop-rock fuzz paints the picture of someone who adores where they come from, but the adulation isn’t a two-way thing just yet “I need the love of my home city/fuck that/need Hollywood”. In the same interview with Northern Transmissions McFarlane states “Toronto is a city that I love. My city shapes who I am, but it’s a city where you need to be very popular in the United States or the UK before they’ll even recognize you. I love it, because when I do make it in those places I would love to celebrate with the people in my home city. I hate it because unfortunately we don’t have a homegrown thing in which the Canadian music industry knowingly uplifts and supports their artists like their other exports. So If I get Hollywood, I’ll get Toronto.”

Assured, confrontational and ready for action ‘The Ends’ represents the fire in The OBGMs’ belly, and if McFarlane has his way this inferno will be felt worldwide.