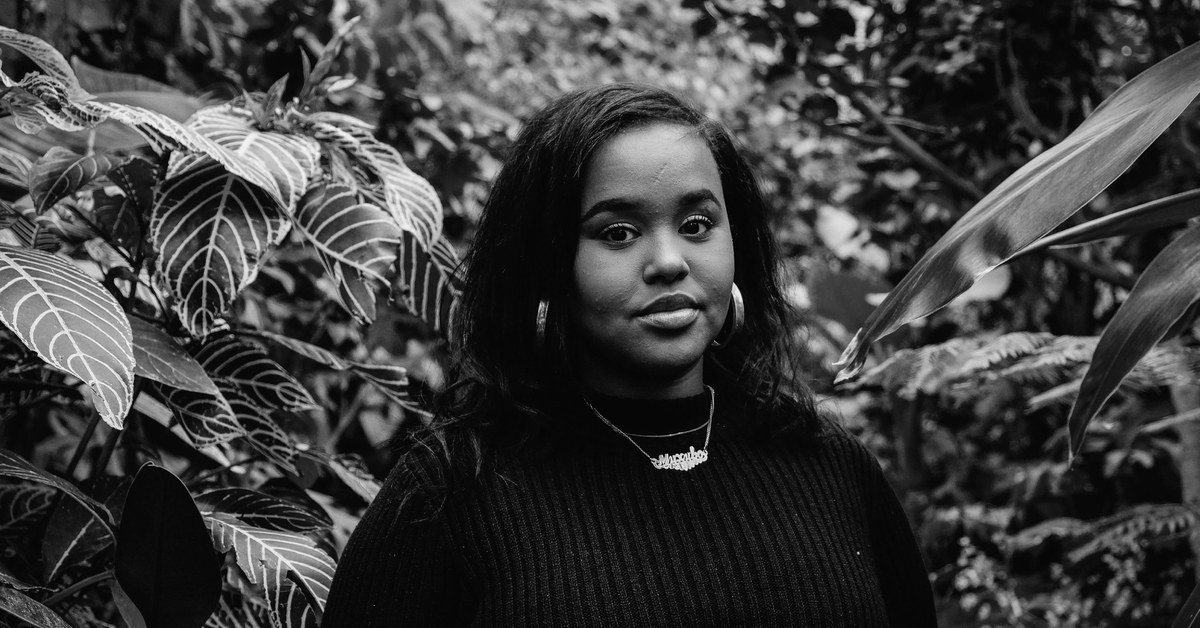 OBUXUM’s Re-Birth is as staggering as it is compact. Across 22 electrifying minutes, The Toronto-based beat visionary’s debut LP quickly pivots from hard synths and twitchy footwork (“Ayeeyo’s Intro/Can U fell my rage”), to lush and ‘lax R&B (“Don’t Blame Them”), to ambient booms (“Take Up Space!”). Though the mostly-instrumental effort weaves together an emotional arc across its many micro-movements, OBXUM likewise includes stirring vocal samples that touch on themes of gender-based violence and equity. While released in the summer of 2019 to acclaim, the record received another bump this month when it was revealed as one of 40 albums long-listed for this year’s Polaris Music Prize. Fittingly, the nom was announced in a broadcast by Haviah Mighty, the rapper whose own Polaris- winning 13th Floor album featured production work from OBUXUM (“In Women Colour”).

Music is naturally part of Northern Transmissions’ conversation with OBUXUM, but the producer also explains how her background in community outreach has impacted her art. In addition to a job working at a supportive housing complex for people dealing with mental health issues, this past April found OBUXUM taking on a role at a shelter for women fleeing domestic violence—a field facing extra challenges and dangers during the distancing measures and at-home isolation of the ongoing COVID-19 pandemic.

“It’s terrible. I’m still processing it, being a worker in that field, but I’m just doing my best to support the women in our building,” she says, adding, “The community I serve, it informs my art. The things that I’ve seen in my life…none of this is new to me, [but] I feel grateful that I’m able to be in a position to help, and be supportive.”

Throughout the call with Northern Transmissions, OBUXUM also offered insight on the production choices on Re-Birth, how she sculpted the soundtrack to an upcoming battle-themed video game called Bravery Network, and the Unexpected Waters she’ll be taking her music through in the future. This interview has been edited and condensed

Northern Transmissions: First off, congratulations on the long list nomination. How did you find out that you were nominated?

OBUXUM: I found out through Twitter. I woke up to people mentioning me, ‘oh, congratulations OBUXM, you’ve been long-listed!’ I was shocked. I feel like I’m pretty new to this whole music industry thing. I try to keep up with it, but I’m not too knowledgeable about it. This artist from Vancouver, Kimmortal, made a post on Instagram and she tagged me; I saw that Haviah Mighty announced it, which was a beautiful surprise. I was thankful for that. My whole thing is putting out art, and not necessarily thinking about who is paying attention to me. I wasn’t paying attention to all that, especially in the beginning. I’ve been performing since 2015; I was ignored for a really long time. [With] awards ceremonies…it’s nice, but it doesn’t dictate where I’m going to go in my career. But I also understand
what that looks like for me.

O: When I did the whole Metaphor series, I wanted to come up and introduce myself, and play upon different worlds. With Re-Birth, I took it to the next level. That was because of the things I was experiencing in my life. The first track on my album, it’s called Ayeeyo’s Intro/Can U Feel My Rage. My grandmother was diagnosed with dementia at the end of 2018, and she kept talking about sexual abuse. As somebody who’s experienced that, I was like, ‘I’m so tired of this shit’, which is why you have those vocals about female genitalia, that mutilation—that’s how they silenced women. It really bothered me to hear my grandma in a state where she is not entirely present—all she’s talking about is her abuse. I remember making that beat and really feeling that rage. I was so upset when I made that beat. I was so mad. I remember crying while making that beat, just crying profusely because I was so upset. I was able to find a vocal [for the track], her name is Iman and she works for World Peace. She was doing a lot of work in Somalia, and she talked about this. I know it happens; I’m also an [abuse] survivor. And that made me mad. Also, I’m named after my grandmother. The whole album means a lot to me, but it really comes from a place of unpacking. I’m re-birthing myself because I’m committed to unpacking all these things.

I was able to find a vocal [sample for the track], her name is Ilwad Elman and she works for Elman Peace. She was doing a lot of work in Somalia, and she talked about this. I know it happens; I’m also an [abuse] survivor. And that made me mad. Also, I’m named after my grandmother. The whole album means a lot to me, but it really comes from a place of unpacking. I’m re-birthing myself because I’m committed to unpacking all these things.

NT: Did working on these ten songs help unpack those feelings?

O: The process was difficult. I was working full-time, and I got contacted for a videogame called Bravery Network, so there was a lot going on. But I felt like Re-Birth really taught me how to center myself, in the sense of being still. My day job at the time was working at the Salvation Army, I was doing community work; I was working on this video game, and I was scared to do it. I was scared to make Re-Birth! But all these things challenged me to create the record. Doing community work makes me understand more about who I am, and also about the world. Doing the video game stuff gave me a whole new perspective, in terms of how people can see music…people who have a very short attention span. When I was creating Re-Birth, I had that concept in my mind to introduce something different at least every eight bars. I know I don’t have lyrics on my project, but I want to introduce a new meaningful idea or emotion every eight bars.

NT: How did that change your ear? What did you want to introduce, from a sonic perspective?

O: I wanted to introduce some sort of dramatic transition. With the video game stuff— I’m not a gamer. I grew up as a gamer, but I haven’t played video games since I was 15— I remember playing these games, and the ideas that I heard, it pumped me up for the level I was playing. In my mind, I want to introduce new ideas every eight bars. I want it to be fluid. I want it to be intentional. I want it to feel what I’m feeling, and I was feeling a lot. I wanted to make sure that Re-Birth really encompassed what I was feeling. That’s why I wanted to pack in as much that I could.

NT: Where there any stylistic choices that you hadn’t been attracted to before Re-Birth that you wanted to explore?

O: I started listening to IDM. That really turned things around for me. I started listening to Four Tet and Iglooghost. I thought it was so dope. It resonated, these really complex ideas. It really shifted my perspective, both with the album and the video game stuff. I was like, oh, ‘wait, I don’t have to limit myself.’ I can introduce a new idea every bar, if I wanted to. If I had not known about that genre, it would not have opened my mind to those possibilities.

NT: Can you tell us some more about Bravery Network? How did you get involved with the project?

O: I feel like the universe just made it happen. They sent me an e-mail saying they loved H.E.R. and said ‘come to the studio, let’s have a conversation.’ We did, and they just trusted me. I was like, ‘guys, I have no experience, I don’t think I’m the most qualified…please don’t hire me” [laughs]. But they said ‘we believe in you.’ They took a chance with me. It does not sound like what I produce. They really challenged me. It was the first time I heard real constructive criticism. It was also my first time doing contract work. I’m a lot more open to work with that, or a film, than working with an artist, just because of my past experiences.

NT: How much music did you make for this video game?

O: I made maybe nine battle tracks, and I’ve also done all the sound design. Everything that you hear in that game, I did it.

NT: The game bio says that Bravery Network takes place in a future Toronto, a post-post-apocalyptic Toronto. How would you want your music to play a part in the future of Toronto?

O: In my mind, the future of Toronto is not limited to downtown. I’m not from downtown. I think that a lot of resources are allocated towards downtown folk. I’m quite literally from the hood. I’m still in the hood— I mean Toronto community housing. I still exist within that space. The future of Toronto in my mind is that you are not limited based on where you grew up or where you exist—we will appreciate you as who you are. Intersectionality is important to consider. I’m not saying that because I exist in Jane-Finch, or that I deserve any kind of accolade or praise, but I’m saying that I wish there was more attention put on youth from where I come from.

I was able to work downtown, get a job right out of high school where I was a youth worker… I took the train for an hour and a half to get downtown. That’s the only reason why I feel like I’ve made it this far. If I didn’t work downtown, I don’t think we’d be having this conversation right now. That visibility does not exist where I come from. Out of that whole [Polaris] long list, I guarantee you I’m the only person that’s living in Toronto community housing. But we’re here; we exist; we’re eclectic. We don’t all make gang banging music, you know what I mean? I still live that reality, and I’m grateful for that reality, because it taught me to be still within myself, and to make meaningful work.

NT: Are there any upcoming projects or tracks you could tell us about?

O: My next album is coming out next year. The title is The Unexpected Waters. I’ll be talking about a lot of things I’ve gone through in the past year. The music will be better. I would hope that the Canadian music industry is going to be able to receive that with an open heart and an open mind.