Thanks For The Dance

It’s not always surprising after an artist passes away that we are treated to a compilation of unreleased songs or newly uncovered b sides but it’s extremely rare that we are treated to an entire new collection of tracks, one that capture the spirit so much of the dearly departed. Leonard Cohen passed away in 2016 and left behind an indelible legacy. The consummate artist, poet, musician and so much more was beloved by fans around the world and now three years almost to the day of his passing, we see the release of the startling, beautiful and elegant Thanks For The Dance. Leonard’s son Adam was tasked by his father to take some of the sparse songs, some only vocals, that didn’t make the cut of their last collaboration You Want It Darker and finish them. He retreated to his garage home studio, just down the street from his fathers previous home and started to work on this album. Adam ended up taking the tracks all over the world, Los Angeles, Berlin and Montreal to be able to work with some of Leonard’s long time collaborators like Javier Mas, Jennifer Warnes and Michael Chaves as well as such notables as Beck, Feist, Bryce Dessner of The National and Richard Reed Parry and together they brought Leonard’s songs to completion and kept the integrity of his work intact.

Thanks For The Dance starts off with “Happens To The Heart” which features Cohen’s raspy baritone over just a lightly strummed Spanish style guitar. As always Cohen’s lyrics paint an amazing picture and mixed with his unique voice and the sparseness of the production, it all becomes so haunting but also so comforting. The production throughout the album remains to do the most important thing, support Cohen’s voice and it thankfully never gets in the way. Mandolin sparks the intro of “Moving On” before it fills out with Cohens voice and a fuller acoustic guitar. The track is a beautiful lament on lost love and under the special circumstance of this particular album also, death. “The Night Of Santiago” continues the Spanish theme that floats in and out through the tracks. The song reminds you of how skilled Cohen was at seducing his audience. His detailing of a passionate night between strangers should be able to push the right buttons. Title track “Thanks For The Dance” is a beautiful love song. An ode to the thrill of a shared dance between two people and the idea that a dance is all that needs to happen but it can still leave you thinking of what could have been. Album standout “The Hills” takes us to some classic Cohen territory. His voice a panther stalking through airy synths and subtle drums until a choir builds up and aptly suspends the proceedings from the heavens. It’s vital and exciting and a marvellous gift left here for fans old and new. The record closes out with “Listen To The Hummingbird” in which Cohen implores the listener to soak in your surroundings. It’s a short and alluring way to cap off the album.

Having “Thanks For The Dance” arrive now, three years after Cohen’s passing is such an amazing feat. The record, while sparse and subtle, still manages to leap out of the speakers and create that special atmosphere that Cohen has always inhabited. It’s an album that is made delicately with care and trusting in the fact that they didn’t have to do much but create an environment to support and console Cohen’s wonderful world. 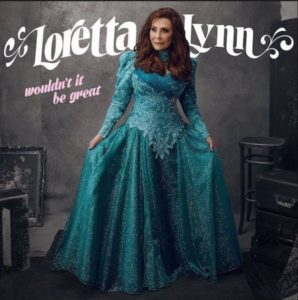 Loretta Lynn ‘Wouldn’t It Be Great’