Suzie True have announced their signing to Buzz Records, home to (Weaves, Dilly Dally, Greys) for their debut EP, Nothing To You, due out October 26th. The self-described “sad girl pop band began as the bedroom project of songwriter Lexi Mccoy before expanding to a full band earlier this year, and have been touring with Sheer Mag, Lisa Prank and Blushh. Along with the news, the trio have shared their new video for “Don’t Grow Up.”

Lexi MCcoy on video for “Don’t Grow Up”:

“I wrote “Don’t Grow Up” because I felt like a lot of my friends were growing up, and graduating college and getting grown up jobs and I’m still here, playing music and skateboarding and sometimes I wonder if I should just give up and start doing the things they’re doing,” says Mccoy. “I feel like that in relationships too sometimes, but what I want is a partner who will be immature with me and be ok with the fact that I want to take a more unconventional life path, and I don’t necessarily want the things I’m supposed to want.

“For the video we went to the Hollywood Walk of Fame, which is one of the most disgusting places I’ve ever been in my life. When you’re there people will lie down next to the star that they want to take a picture with, which is just so gross to me, so I thought if I put whipped cream all over New Kids on The Block’s star and then ate it that would be a really awful thing that I shouldn’t do, but that made me think it might be a good idea so I did it. That whole section of the walk is boy bands, and I love boy bands…probably because I haven’t grown up.”

The Accidental Fun of Golden Drag 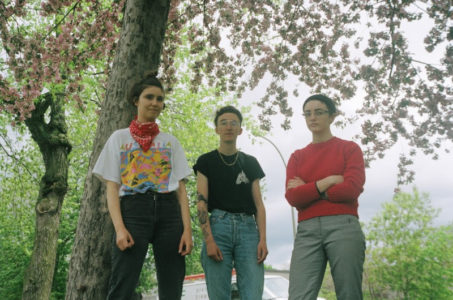