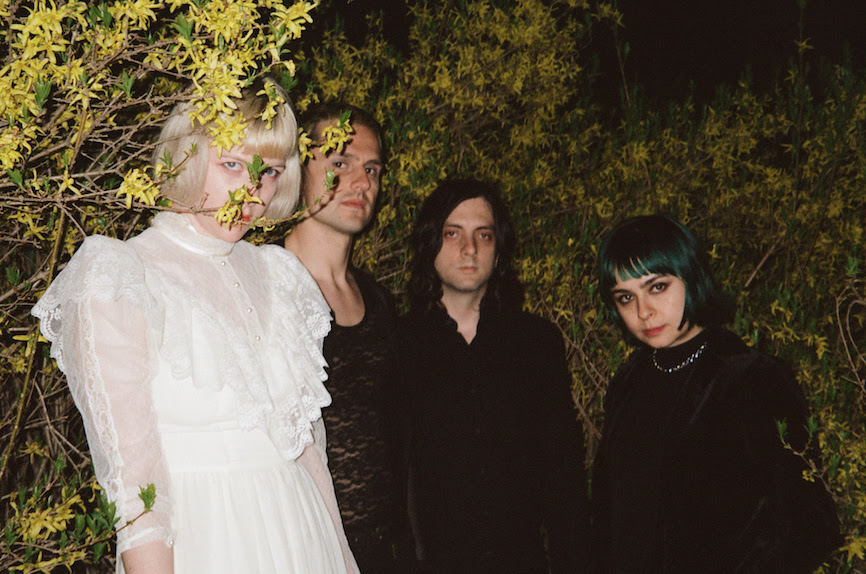 Don’t believe recent melodramatic headlines. Dilly Dally did not almost die. They did almost break up, though.

After touring behind their 2015 debut album, Sore, the sludgy Toronto rockers took time apart from each other. For a year, guitarist and vocalist Katie Monks worked on music by herself in her bedroom. But as much as the band needed the break, time alone took a toll on her. “It got to a point when I felt so isolated that I started going in circles,” Monks says. That was when she started calling in her bandmates, bassist Jimmy Tony, drummer Benjamin Reinhardtz, and guitarist Liz Ball. One by one, they swung by Monks’ place and offered their input, helping break up her creative patterns.

Dilly Dally are entering their second album, Heaven (out September 14th via Buzz/Partisan) with clearer expectations. They now know what it’s like to be locked in a van for hours, how fast-paced media days can get, and how tight money most certainly will be. “Now, we all know what we’re walking into. And the fact that everybody was able to look each other and say, ‘Yeah, we wanna do this,’ I think is actually a lot more impactful, and the ground we’re walking on is sturdier.” Now that they know what to expect, they have a better idea of how to manage stress-related tensions that arise within the band.

Helping Dilly Dally’s prospects is the fact that now, they are comfortable with who is in the band. “We’ve done a couple of tours where Tony didn’t come on the road, and we had a different bassist. We know now, after going through that, that Dilly Dally is the four members, and if somebody can’t do a tour, or we have to sub somebody in for a show, or whatever, that it’ll be okay, that we’re still going to keep moving forward, that it’s not like ride or die; we’re not going to bend over backwards for the industry if it’s sacrificing our mental health.” Monks admits she was protective of the band when Tony and Ben joined because it was originally hers and Ball’s. “I didn’t know that I needed Tony and Ben, and now I know that I need them and that Dilly Dally is the four of us, for sure.”

Back in the days of Sore, Monks worried about far more than just who was in the band. She describes the album, a wrecking ball of raucous and urgent energy, as an “angry explosion of feminism,” a demand for attention. “I was mad about misogyny and my voice not being heard as a woman.” She was also incensed by hate-filled, discriminatory politics. Speaking about that time period, she alluded to deaths amongst family and friends. “When so much shit dumps on you, you can’t fight it anymore. You can’t be angry anymore. I felt like it was pouring rain, or it was a fucking storm all around me, and I was fighting for this one little thing…. I was just done being mad, and I just felt sad and so overwhelmed with all this negative energy.”

A different tone rings through Heaven, though. “At the time when we wrote Sore, it felt like nobody was angry. It felt like everybody was having a great time. But by the time Heaven was starting to happen, it felt like there was so much anger in the world, in our surroundings, on the television. I didn’t need to add any anger into that pool.” Monks decided to redirect her emotional and creative energy towards figuring out what she could offer to the political conversation. “I’m not religious, at all, so [Heaven] was an attempt to create an afterlife for the band after we felt like maybe it was over,” she says. But more than that, on Heaven, she offers a sense of hope, “like a way out.” Heaven is still lively, but there's a sonic lightness to it too. Songs like “Sorry Ur Mad” don’t immediately feel like the sky is falling or the walls around the listener are collapsing.

Monks also caught a glimpse of hope while working on Dilly Dally’s music video for Heaven’s first single, “I Feel Free.” “[I]t didn’t feel like a tug of war. I’d always tried to explain my vision to directors and then end up with something that was middle-ground.” This time, the director trusted her vision. “I’m still blown away with how exactly it was what I wanted. It gave me a lot of hope moving forward, taking the reins with things aesthetically with the band.”

The feeling of being in control and the internal work Dilly Dally’s members have done with their relationships have rejuvenated the band. To sustain that bond, and her own mental health, Monks plans to meditate and journal while on tour. Also, they have a manager now. “I’m hoping that now, I’m going to be able to be there as a friend [to my bandmates] more and be a little bit bless stressed out. Then I can just focus on the music and performance and hanging out with fans at the merch table and hanging out with my bandmates, as a friend.”