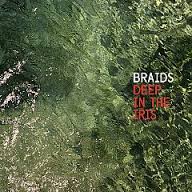 Deep In The Iris

The Canadian electronic-pop/experimental trio Braids consists of Raphaelle Standelle-Preston (lead vocals, guitar, keyboards), Taylor Smith (bass, guitar, percussion), and Austin Tufts (drums, vocals) and third album, Deep In The Iris, is set to be released April 28th on Arbutus Records. The band members (which at the start included Katie Lee and Vince Man) met while still in high school, released debut album Native Speaker in 2011, toured extensively to promote it, and dropped sophomore album Flourish // Perish in 2013 to much critical and fan acclaim.

While their previous albums were recorded in Montreal, Raphaelle, Taylor, and Austin decided to head south for the creation of their third album, to change not only the climes, but their minds about what they were crafting. Rural locales in Arizona, New York, and Vermont were chosen for the recording process and what developed was an album that blends acoustic elements into the electronic template to emphasize a warmer, more natural sound than what can be found on its sonically minimalistic predecessor Flourish // Perish.

The 9 songs of Deep In The Iris are woven through with Raphaelle’s mid-range to airy, malleable (and sometimes strangely accented) vocals, compelling to too-repetitive lyrics, varied to becoming-too-familiar electronics, and contemplative piano notes and occasional guitar strum. The band members have taken a purposefully lo-fi approach to the electronics (one would assume, unless they didn’t have access to polished instrumentation in the environments where they were recording) and a staticky patina coats the overall sound. Most songs are constructed out of the contrast between lickety-split electronic percussion and the slower paced piano notes and Raphaelle’s direct to dreamy to expressive vocals. This tempo differentiation is a thread that runs through almost all of the tunes and it breeds unneeded rhythmic similarity as well as forges a disjointed framework where the pace of the ‘artificial’ electronics moves at a higher rate than the ‘natural’ piano, guitar, and vocal measures.

Album-opener “Letting Go” is an apt example of the above-mentioned pacing dichotomy which is displayed in its speedy, blooping beat and lightly clattering percussion hitting up against introspective piano notes and Raphaelle’s floaty vocals, one in a mid-range tone and one in a higher register. On the verses Raphaelle takes on an affected, halting enunciation at times that becomes more pronounced on some of the album’s future tunes. She sings in a light, unassuming tone and then graduates to emotionally vulnerable exclamations by the song’s end. A slightly staticky distortion touches the electronics and the electro blips ‘n’ zips sound tinny and cheap, obscuring the richness of Raphaelle’s delicately soaring, wordless vocal support to her main lines.

The vocally lovely and sonically morphing “Taste” revels in the same introspective piano notes and rising vocal intonation on the chorus as “Letting Go”. The pace is quick, with a tocking beat and fast-clacking percussion. Raphaelle sings in a mid-range tone on the verses, and then turns alternately sweet to exclamatory on the chorus sections. Near the end of the song, the tempo suddenly slows down with just piano notes and little flicks of tape spooling backwards while a softly melancholic Raphaelle sighs “We can’t explain why we hurt the ones we love most of all.”

The teeming electronics of “Happy When” recall the tunes of electro-trip-pop trio Nedry and Raphaelle’s oddly clipped, affected vocal tone on the verses comes across like Nedry’s singer Ayu Okakita. Flitting clicks, bloops, whirrs, and clacks dot the background while slower piano notes and plucked, water-drop tones support a breathy Raphaelle’s incisive lyrics of “I want to catch my breath / I’ve been throwing it out… / speaking of empty things / just to fill the air…” Light vocal accompaniment rises behind Raphaelle’s main vocal lines like an airy soufflé.

The highlight and centerpiece of the album, “Miniskirt”, is a must-listen if only for its powerful and insightful lyrics that has Raphaelle moving from a general overview of certain men (i.e., the misogynist, the chauvinist, the “…womanizer”) viewing a woman in a miniskirt as a ‘slut’ or ‘bitch’, and “…the one you hate…”, to the deeply personal where she sing-speaks quickly in a raw, emotionally heightened tone about a man who’s “…full of hate / towards himself, towards his fate / and everything he touches is for him / My mother’s soul he devours with a grin.” The instrumentation may be challenging and dissonant on this track, but in a way it mirrors the vivid lyrics of this striking and effective song.

Once again a speedy tapping beat is contrasted with contemplative piano notes on “Bunny Rose”, although this time the caffeinated electro notes are augmented by reverberating crackles and light plinking tones and the slower piano parts and Raphaelle’s voice are couched in hushed, dissipated male wordless vocals. That coating of static is continually present as Raphaelle sings in her familiar affected, halting style “…what’s so bad with being alone? / …I don’t want to aimlessly throw / my love around like it’s nothing.” The sound picks up with lofty, extended female vocals and guitar notes and then fades away with piano and looped wordlessness…

The incongruous pacing is again felt on the album’s last song, “Warm Like Summer”, where a trippingly fast drum beat is opposed by reflective piano notes. Weird whispered vocals are looped and played as notes while shimmering cymbals frisson warms up the ambience. Raphaelle drops whatever persona she’s been trying on at times throughout the album and sings in a regular, mid-range tone, sweetly lifting up her vocals at the end of the tune, providing a fleeting moment of hope as she sings “…You’re always in my heart.”