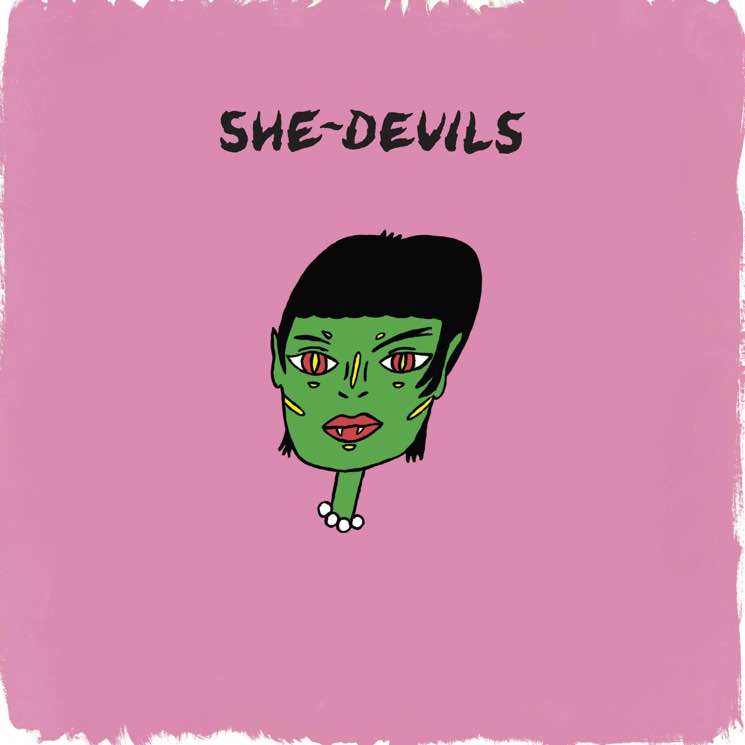 Coming off of their stellar EPs and constantly building hype expanding well past the Montreal scene, She-Devils finally have their first full length record, and it doesn’t disappoint. Audrey Ann Boucher and Kyle Jukka have really pushed themselves to craft a record that finds them going beyond their already great sound for something more fleshed out and impressive than ever before.

Hitting hard on their opening track “Come,” Boucher’s vocals sound noticeably fuller than any previous song the band has released, setting the first noticeable evolution on the record. The song’s mix of loops and heavy sonic dives make for a more layered an entrancing sound, especially in instrumental bits, than the band has ever showcased before. Furthering their deeper sound is show-stopper “Hey Boy” that melds in the addictive loop of the song with the catchy and strong vocals from Boucher, made all the more powerful by Jukka’s production.

“Make You Pay” shifts to a more attitude-driven sound, with guitar and Boucher playing off each other for an exotic yet deadly combo both sonically and thematically that keeps surprising thanks to the fun percussive touches, and fun infused in the song. On a more lighthearted note “Darling” plays into the more surf-inspired side of the album, that while overtly simple, allows for more of Jukka’s exciting indulgences to the sound.

“How Do You Feel” takes a dreamy pop note, not pulling from the duo’s retro inspiration but jumping into it fully. While it may seem initially less intriguing, the slow integration of harmonies and background effects turn it into a much more twisted take on a crooning track than would normally be expected. With Roy Orbison overtones, “Blooming” takes pop foundation and slams the synth and explosive electronic touches in devastating moments of beauty.

Something about “You Don’t Know” emulates dozens of melodies you know and love without ever explicitly being too derivative of any of them. Something about the immediately familiar sound of the track, which takes a lot more risks than any song it pulls from makes it delightfully fun while also endlessly fascinating as its own song. Letting Boucher drive the track on “The World Laughs” there’s an intoxicating quality to the vocal melodies that lets the instrumental side of the song act as a more hypnotic base to push it forward. Her newly enriched vocals are at their most sturdy on this track making it stand out amazingly, especially as the instrumentation really blooms in the choruses.

Taking the furthest departure on “Never Let Me Go” there’s a lot more space for each part to ring out, making for a much looser and experimental feel, while also feeling like one of the more original tracks on the record. While slightly less catchy there’s something about how different and far-reaching it is that makes for a fun look at where they may be headed next. Going out on echoed bliss, “Buffalo” closes the album on an organ and reverb drenched finale filled with big drums and overwhelming roars in the background.

Truly evolving for their first full-length, She-Devils manage to exceed expectations on this release with fuller vocals, a more explorative yet fleshed out and enveloping production to make something complete. Hypnotic, old and new all at the same time, this album stands as great display of not only their talent and voice, but how much clever sampling can create amazing art with the right minds behind it.