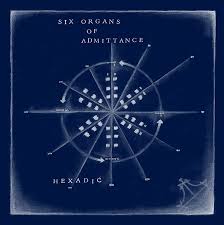 On February 17th, Ben Chasney’s Six Organs Of Admittance return with Hexadic, their first album in three years. 2012’s Ascent found Chasney reuniting with his former bandmates in Comets On Fire, taking cues from the noisiest moments of that group while still retaining the occasional moments of fragility that characterized his earlier releases. From Chasney’s website, he describes the process of composing the record as a system that “consists of different aspects, or correspondences, that can interact with each other or exist on their own”. A regular deck of playing cards altered by the group denotes specifics, such as alternate tunings, intensity of playing, and “representations of figures who populate the Six Organs universe”.

Opening track “The Ram” is two minutes of freeform jamming that sets the tone for the rest of the record. There is no discernable downbeat, and Chasney’s hazy twang appears as much as it does not. This allows the guitar/bass/drum trio to make beautiful use of negative space , creating a surreal, paranoid atmosphere. From here, we move to “Wax Chance”, a direct descendent of Chasney’s work on Ascent. The atonal riff that ties the song together is drenched in fuzz, and (to borrow a trick from Comets) the vocals are buried and effected. After 2 minutes of shredding, the song transitions into a tense blast of noise for two bars, then returns to its face-melting fretwork to ride out the rest of the song.

In his time apart from the Six Organs moniker, Chasney has spent the last few years exploring this brand of manically loud psych rock with projects like Rangda and a brief return to Comets On Fire. As such, it makes sense that most of Hexadic contains elements of this. There are, however, many notable moments where the group of players dials it back. “Hesitant Grand Light” is a mixolydian tinged song in the same spirit as “The Ram”, though a little less rough on the edges and held together by a staccato run played on an acoustic guitar. The melody on “Future Verbs” contains elements of popular Italian composers (Morricone, Rota, et. Al) and is equally spacious and warm.

On Hexadic, we get the best of both of Chasney’s worlds: the frenzied and the contemplative. Here, Chasney makes both sides coexist almost effortlessly.