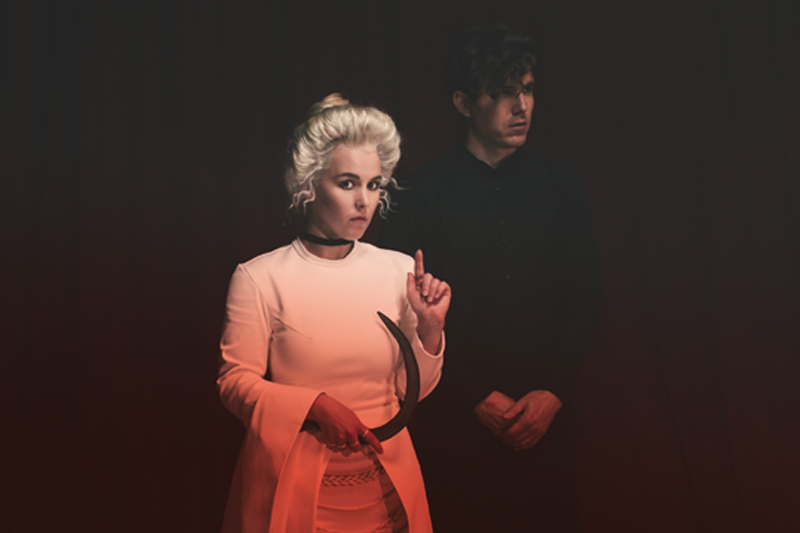 We’ve all been thrusted into a whole new world. The situation out there is so new and scary and the feeling of not knowing what is going to happen is something that many of us have never had to deal with before. Self isolating is the new, new normal and while we stay indoors it’s important to find those things that make us feel safe. Megan James of electronic pop purveyors Purity Ring has been searching for what it is that can make her feel comforted and safe even before all this ever happened. On their new album Womb, dropping April 3rd via 4AD, herself and musical partner Corin Roddick have attempted to figure out what or where that comfort can be found. The duo, coming from humble origins in Edmonton, Alberta, have seen their craft take them all over the world, playing shows to rapt audiences and working with some of the most celebrated artists in the world. Now, as we all await whatever the outcome of the current climate may be, James and Roddick will be releasing their latest wonderful collection of songs and, in turn, have crafted an album that should go a long way to making most of us feel heard, seen and safer.

When we reach James on the phone in her home in Los Angeles, the thoughtful singer/songwriter and producer has been practicing self distancing and has realized that the main themes of their new album may have been a little more prescient than she initially assumed. As a group, Purity Ring have stated that “WOMB chronicles a quest for comfort, the search for a resting place in a world where so much is beyond our control.”

“As it happens, the feelings implied in the record and the message there is applicable to what’s gong on now,” she explains. “It ended up being really suitable. I am a total homebody regardless and have always been making as many things as I can from home and that give me a feeling of a lot of comfort especially while still living in a city.” While herself and Roddick were writing the songs that make up Womb it hit her about halfway through that they are all tied together by that sentiment of looking for comfort in a world gone upside down. “We listened to them together, there were about seven of the songs that were finished and I was surprised by how they made me feel,” James explains. “It was like oh, hearing them together made me feel better than the turmoil I felt white writing them. It straightforwardly made me feel comforted. It was good to step back and perceive it and understand it. It was cathartic.”

That catharsis is something that comes through the speakers when listening to Womb. The album’s ten tracks are quintessential Purity Ring. Ethereal and beautiful, full of hooks but always interesting throughout. The band has mastered their distinct sound that was heard for the first time on their debut album Shrines in 2012 and subsequently shaped with their work on that album’s follow up Another Eternity three years later. What is different about all these releases is not only how the members of Purity Ring’s lives have changed since being catapulted onto the world’s stage but also how they’ve approached the crafting of each of these three albums. “We didn’t live in the same city for a long time but now we both have moved to the same city. We actually live down the road from each other,” she says with a chuckle, ”and we built a studio in one of the spare bedrooms we had available.” As James explains the idea of going somewhere else to work on music was appealing but ultimately one that didn’t work out as well as they thought. “We were traveling a bunch and I need at least one or two days to come together after travelling to just feel myself, so we ended up just staying home a bunch more and the comfort of being close to home was, I think, important for this record. While on Shrines everything felt so close and intimate and then with Another Eternity we wanted everything to feel up in the sky and this one we wanted it brought back down to earth, to be inside again for it’s own warranted reasons.”

This more intimate quality that was coming out of the recordings can also be traced back to the fact that everything that James writes about is very personal to her. “A lot of songs on this record are about people who are close to me or people who I want to have close to me,” she says. “I try to sort of make the thing I am writing about a bit of a scripture or an archetype so I can comfortably step back and look at it. The songs are about these people and their lives put through my perspective or the perspective that I would want to have on them. It’s this world of characters and because the lyrics come from the same source it makes sense and makes it all fit together. These people in these songs are all my family, the one I was born too or the one I choose to gather.”

With gathering with loved ones something that we are recommended not to be doing during this period of time when we are all supposed to do our part to flatten the curve of the COVID-19 outbreak, it also goes without saying that the bands touring plans are also getting shifted. When asked how she is handling all these new developments, the message James is taking from this situation is ultimately one of hope and optimism for the future. “The way that this is all affecting everyone economically is troubling, it’s bad and then at the same time, I’ve been watching people being active about supporting art and that is really important for me. It’s given me a lot of hope and honestly my hope has been on the rocks lately, paying attention to American politics,” she says with a wry laugh. “Watching everyone take care of each other from their homes and through their differences gives me more hope. Whether it’s supporting an artist online or people posting these lonely dance videos, its so beautiful to see these things we do when we are alone and would normally just be hiding, it gives me hope.”