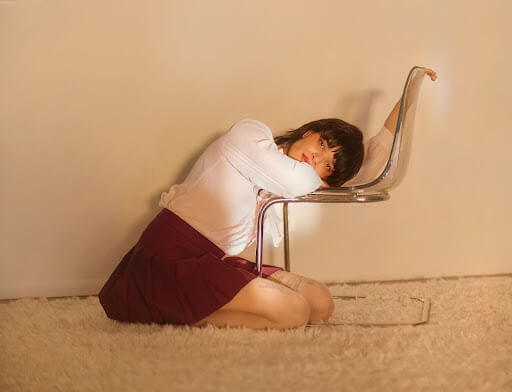 Fashion Club, AKA: Pascal Stevenson has shared the second single “Pantomime” off her debut album Scrutiny. “This is the first song I wrote for this record” says Stevenson, “It’s about different kinds of social performance, and how we weigh our needs against others. A lot of people advocate for marginalized groups in their public lives but then don’t make any effort to look inward and address their own harmful behavior in their private lives.” Scrutiny drops on June 17, 2022 via Felte Records.

The contours of what would eventually become Scrutiny were initially sketched while Stevenson’s other band Moaning toured Europe in support of their critically acclaimed debut album. After returning home and getting sober, Stevenson found herself in a period of deep self reflection, exploring questions of ethics, responsibility, self-deception and systems of power.

Honesty is connective. When you dissolve barriers to the truth inside yourself, you also erode the walls that keep you separated from other people. There’s a certain painful beauty in cutting back to yourself, in cleaving away layers of deception until the structure beneath your ego is laid bare. Scrutiny, the debut album from Moaning’s Pascal Stevenson under her new solo alias Fashion Club, explores the mind’s complex relationship to morality, and the way structures of power tend to replicate themselves through unexamined habits. Through lush, dense curtains of sound, the album unfurls a series of searing questions: What’s a lie you held too close? Can you justify your cruelty? Are you listening?

Stevenson began writing the songs that would become Scrutiny toward the end of 2018, as Moaning embarked on a European tour in support of their critically acclaimed first album. Connecting directly with live audiences night after night reinvigorated her relationship to making music. Between shows, in the back of the band’s tour van, she traced early drafts of Scrutiny’s instrumentals on her laptop, planting the seeds of what would bloom into her captivating solo debut.