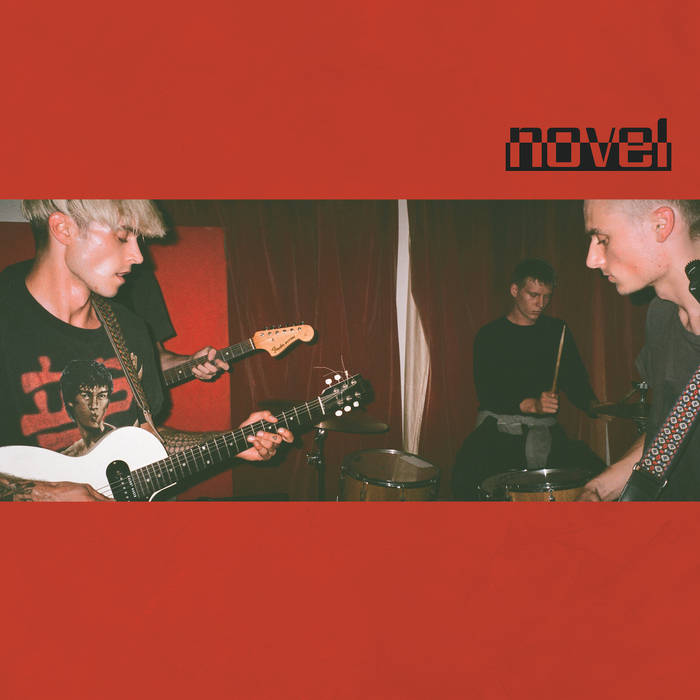 What year is it? So says Vancouver-newcomers NOV3L’s Bandcamp page, and upon hearing their debut EP, NOVEL (releasing February 15th), one may be left with the same questions. Taking cues from post-punk and new wave groups of the late 70s and early 80s and empowering them with a more modern, frenetic tempo, NOV3L (that’s the band) both benefits and suffers from their clear influences. They certainly have a sonic niche they carve over the course of the EP’s eight tracks, though perhaps they shelter themselves inside of it too deeply.

Album opener “To Whom It May Concern” is a cautionary tale about the over interconnectedness the Internet brings, coming from the “last of the pre-Internet generation”, and it pretty much sums up everything the EP will deliver. The vocals come in shrill, off-kilter spurts very reminiscent of Talking Heads’ David Byrne, delivering ‘pro-mindfulness’ messages in bite-sized lines. The guitars are flurries of high-pitched jangle pop riffs, combined with the punchy rhythm section to create a kind of chilly sparseness between the instruments. “Natural” is driven by a simple, dancey riff; “Sign on the Line” has a snarky, syncopated rhythm that reminds of early Arctic Monkeys work; “Will to Power” has a breezy disco beat with smart riffing overlaying—each song has a flair, though they rarely break away from the tight, high-strung, and often overly rigid structure they establish, however smart the melodic polyrhythms can be. But listen to the lightning crackle of interweaving guitars on the intro to “Suspicion” or the coalesced climax of “Are They”, or the pseudo-math rock in “Will to Power”—NOV3L’s six-man team is really milking their style in these moments, and it’s great.

The album’s other high points include the ghostly breakdowns that frequently appear, such as the bridge in “To Whom It May Concern” and the wailing sax in “Natural”. And though most tracks are limited to a crisp two or three minutes, some take total 180 shifts halfway through—the droning “Take You For” doubles down on its speed, and “Will to Power” only uses it’s main riff as a reoccurring motif to rubber-band back into from various tempos. There’s a lot of inventiveness in the record’s small moments, though they don’t extend to the record as a whole. And despite the vocal’s strange (though not unheard of) style, most of the tracks’ socially-charged mantras feel pretty one note even when they’re jumping from anti-capitalism to anti-apathy to social detachment to… The lyricism frenetically dances around these topics along with the music, though they never really break any topic open in a new or thorough way.

With their debut EP, NOVEL, the six-man team of NOV3L firmly establish themselves with a sonic mixture of chiming, uptempo post-punk and jagged guitar play that cuts deeper than their diluted punk messages. Still, NOV3L sonically explore a slew of ideas crammed into tight, DIY-aesthetic tracks, giving the deceptively simple NOVEL a smart longevity and a glimmer of hope for the band’s future. Standout tracks are “Take You For”, “Suspicion”, and “Are They”.

NOVEL comes out on February 15th via Flemish Eye Records.