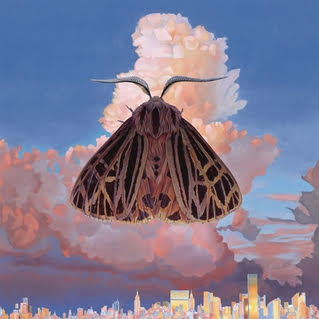 As far as spirit animals go, the moth may be one of the more unlikely choices out there. Though the many variations fluttering around the globe offer a rainbow’s worth of winged colourways, we tend to focus on the species’ muted presentation in comparison to its lepidoteran cousin, the butterfly. Hell, the cover art to New York duo Chairlift’s third full-length release, Moth, juxtaposes a beige likeness of the titular insect floating high above a cityscape against a vibrant, blue-and-pink sky. Thing is, the moth also gets credit for being attracted to the light, which makes a lot of sense for Chairlift’s salute, given the quality of the LP. Their first full-length release in four years, Moth is Chairlift’s most uplifting offering yet.

Chairlift first popped up on most people’s radars with boppy pop number “Bruises,” the electro-pop-dipped single from 2008’s Does You Inspire You that got a big push by being featured in an iPod nano commercial. A lineup shift found group member Aaron Pfenning leaving the ranks, with Caroline Polachek and Patrick Wimberly veering off into more ’80s-leaning sounds for 2012’s Something. While it’s been four years in between Chairlift albums, it should be noted that the pair would collaborate with Beyoncé  for the R&B queen’s “No Angel” track in 2013, and Polachek also offered up a solo album of her own in 2014, as Ramona Lisa. Paring down the lineup and exploring the greater pop world have led the duo towards the more straightforward presentation of Moth, and for the better.

While “Look Up” is a lean and inviting opener that delivers floating vocals and a slow-burning groove, the band’s beatific “Polymorphing” transforms Moth into a full-on party. Further exploring ’80s soft-pop sounds, the track arguably salutes prime-period Anita Baker with its whirl of from-the-hip rhythms, butter-soaked blasts of brass, and sticky guitar licks. Polachek, meanwhile, sounds sublime, her range running elastic as she pushes for “something better than what you’re asking for.”  Fittingly, she further questions of a blasé figure, above the sweetly-swerved pace of the piece:  “If this life was a pulse would you feel it?

The horn-heavy approach returns for “Ch-Ching,” which also has a swell of sonics twisting above a massive clap beat as Polachek, after breathily making mention of inter-personal mystery and suspense, offers up a code-cracking hook (“Ch-Ching, Ch-Ching/27-99-23”).

Even more revealing is “Crying in Public,” Moth’s half-swung pseudo-ballad. The band’s New York home base shines through the piece, with Polachek confessing to having emotional breakdowns on Subway trains, or while passing by a crew of boom box-blasting b-boys. More worldly, however, is “Ottawa to Osaka,” which mixes a busying clack of castanets, pizzicato string plucking and Japanese-language samples.

Though Moth generally soars high– the vintage breaks and synth smoothness of Jimmy Jam-and-Janet-style pop ‘n b cut “Show U Off” pushes Polachek’s impressive pipes through the stratosphere– a few mis-steps ground the record every now and again. While full of pluck, the fast-paced and foot-shuffling “Romeo” feels like it would have fit in more with the band’s early period than its current incarnation, and thus feels a bit out of sync with the rest of the LP. Beyond the rippling digi-snares on penultimate cut “Unfinished Business,” the airiness of the piece is a touch underwhelming.

All the same, the record follows-through more than it falters. Chairlift have taken themselves up a notch with Moth.