Psych-rock artist Karaboudjan (Tycho), has dropped his second single and video “Let Go” off his debut solo album. IMAGO, due out September 2021.

Karaboudjan is the solo project of multi-instrumentalist Billy Kim, who has toured with musician and composer Tycho since 2016. Born in Inglewood, California, but raised a stone’s throw to the east in Fullerton, Billy grew up watching his parents sing together at home. While his parents saw music as more of a hobby, Billy knew he wanted to be a professional musician at the age of 13. By the time he was 17, he had already embarked on his first real nationwide tour with his post-hardcore band, The Prisoner’s Dilemma. He also experienced some mild success playing in a band called the Steelwells.

On his writing process, Kim shares: “Let Go” is actually the oldest song of this release. I originally wrote the song instrumentally back in 2013. I knew I wanted the lyrics to contrast the light and laid-back dance vibe the music has. I also knew I wanted the song to be about losing my dad, and the vulnerability that it ensues. Lyrically, I finished the entire song in an instant, all but the chorus. And that is how that song stayed until I rehashed it for this EP.”

“When I reopened it, I had some missing plug-ins that actually completely changed the part I had created for the chopped up vocal, “let go” between the pre chorus & chorus. Originally, the vocal chop lyric is “let down” (from the pre chorus) but it was sounding much more like “let go”, which gave me the idea for the lyrics in the chorus about letting go of my dad. It was an interesting experience to write a song in two different stages of life for me, but in a way, it sort of feels like that’s how it was supposed to happen in the way that it did. It was also a bit comical as I had to just “let go” of how the old part sounded. Acceptance in two very different forms.”

Billy Kim aka Karaboudjan on the video for “Let Go:”

“When I initially approached Justin Gaar (director), about creating a video for ‘Let Go’, I bounced a few of my personal ideas to him about the song and what it meant to me. Justin came up with the basic concept of the video after listening to the song, and I loved the ideas that flowed out of him. His passion for his vision combined with our top notch production crew from Half/Half really made for a smooth day of filming, and I can’t thank them enough.” 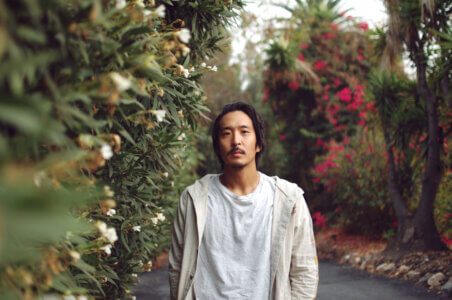