2 months ago
Words by Adam Fink 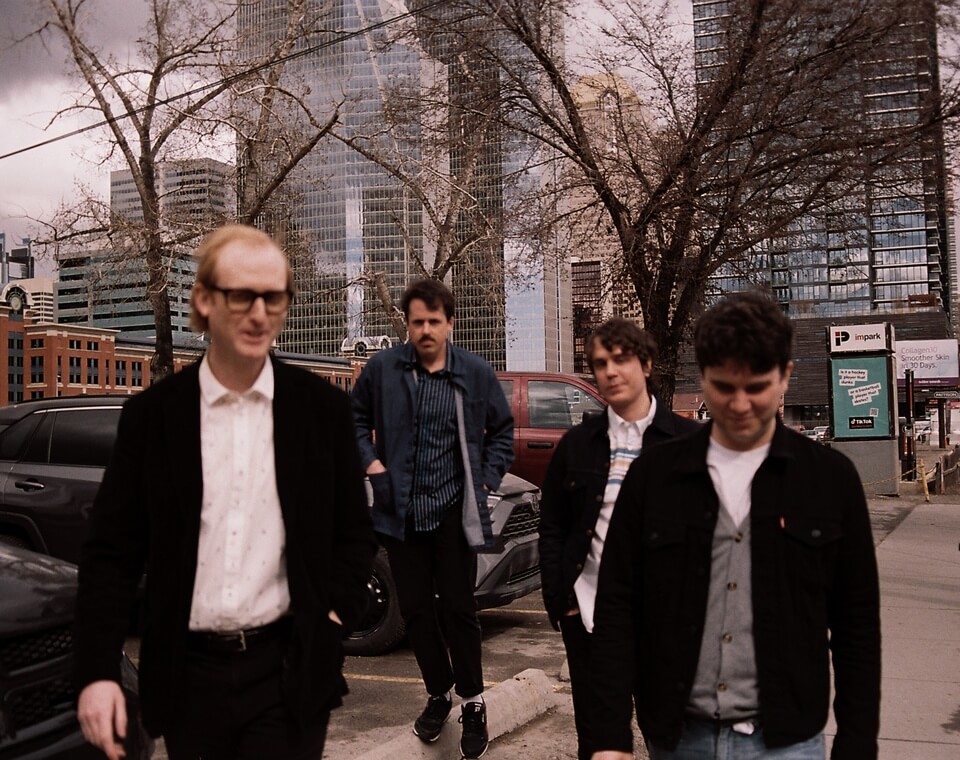 Kiwi Jr. photo by Laura Lynn Petrick
Share on TwitterShare on PinterestShare on PocketShare on RedditShare on FacebookShare on Email

“Dan showed up at the studio with blood all over his forehead,” explains Jeremy Gaudet about the turning point of his band Kiwi Jr. ‘s third, and quite awesome, album Chopper. “It was the second day of tracking, the first was pretty normal. Just tracking bass and drums and anyway, we start to get him cleaned up, and we say so I guess we are just going to track some drums, bass and guitar and he was like, ‘no, that’s too boring. Let’s go rent a bunch of synths.”

The Dan in question is Wolf Parade, Handsome Furs and Operators frontman Dan Boeckner and the result of his and Kiwi Jr.’s, Gaudet, Mike Walker (bass), Brohan Moore (drums), and Brian Murphy (guitar), work on their new album is a cinematic masterclass of indie rock that is one of the year’s best records. The Toronto based band has put out two solid records of Canadiana inspired indie pop, think Sloan, Flashing Lights and Jail, but with Chopper the band has set a new standard for what they do. “None of us can play or even really have any synth parts for the songs,” Gaudet says with a laugh while discussing this new and surprising direction Boeckner instigated, “But sure, and we just spent that day and the next day recording dramatically out of order. Laying down synth lines before there were drums and we ended up keeping most of it. It was sort of unorthodox.” The result is an album that you can listen to start to finish. A journey through a nightscape of the bands own creation that is infinitely rewarding.

The cohesiveness of Chopper stems from Gaudet being able to focus on his songwriting. “I was able to write ten songs all at the same time,” he explains. “And that’s the album, whereas previous records, you’re playing shows and resurrecting old demos and that kind of thing. So this is definitely not a concept record but with everything being written at the same time and coming from the same place, it really does put the record into a specific little box.” The album kicks off with “Unspeakable Things” and its bouncing synth line and driving beat, a little reminiscent of Room On Fire era The Strokes, setting a definite night time feel that carries on throughout the album. “On this one we wanted to do a bit of a night time record,” Gaudet says,” We wanted things to kind of groove a little bit more, to have that certain vibe. The idea was if you were taking the subway home really late at night, we wanted a record that you could put on and it would soundtrack that feeling.” There is this mood that carries on throughout the running time of the record and it is the perfect antidote for a typical summer rock band release.

“With the previous records, you can’t put those on and have that type of Lost In Translation cab ride and this was something that we at least wanted to try to do a little bit here.” Chopper benefits from its cinematic soundscape. Not only the feel of the album but most of the songs being named after or referencing films is an interesting surprise. Tracks such as “The Extra Sees The Film ” puts you in such a specific place that it’s something that you can’t shake while listening. The song’s languid groove and wonderfully specific lyrics capture a moment that we’ve all been in but could ever really put into words to describe. “There’s a soft opening, she’ll be there if you wanna stop by/Flirting with the human scorpion jacket from Drive/He’s a haircut aiming a jar of gin/And he talks about Los Angeles, that’s a cue for you to jump in/“Excuse me I couldn’t help overhear you mention LA/See I was there for Kobe Bryant’s last NBA game/It was five or six years ago back when there were no guaranteesAnd it was on the TV at a bar somewhere in I think Los Feliz””. It all just goes to show how much of a great lyricist Gaudet is. He is able to take the mundanity of a bar room conversation and translate that into something completely universal.

“The whole record was made in two weeks and we didn’t really have time to be messing around that much,” says Gaudet of the recording process but it’s in this detail that we get an insight of how much Kiwi Jr. actually cares about the music they make. In that short period of time they have crafted an album that sets a perfect tone, one that references film, sports and Canadian pop sensations Crash Test Dummies and even if you get the references or not, it still takes you on a complete journey that feels fresh and rewarding with every listen. Chopper is out today via Sub Pop Records and it is a record that you should have to cherish in your collection at home.