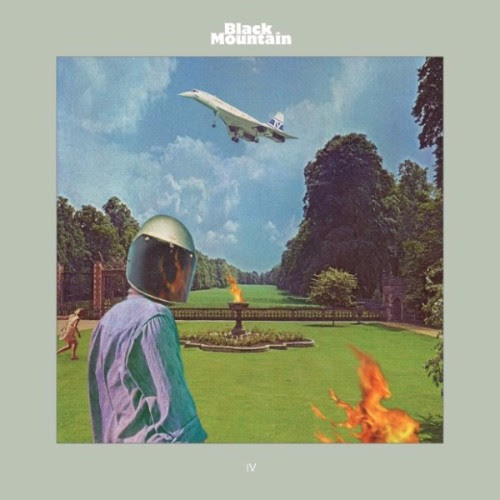 For anyone new to Black Mountain, the fact that their last release was the soundtrack to an apocalyptic surf movie should be enough of an introduction. A band that has been making music for the past 10 years, they’ve been keeping themselves busy with different projects, finally coming together to release their first album 4 years after the aforementioned Mad-Max-meets-Endless-Summer-odyssey (Year Zero OST).  For this one, the band ended up working with Randall Dunn, who’s previous credits include Sun O))) and Wolves In The Throne Room. The studio they recorded in – Avast! in Seattle – even housed the same mixing board for Alice Cooper’s Billion Dollar Babies, there’s a certain amount of grit going into IV, which the band has referenced as “their best material to date”.

IV is a hell of a record, the production alone deserves a moment in the spotlight. It sounds fantastic. From the monster riff in the opener, “Mothers of the Sun”, the listener is taken through a long winding journey through multiple aural dimensions. It’s the kind of thing that you see live that makes you tap the person next to you just so you can say: “How great is this!?”

Hell, this record will make you want to say the word “inter-guitar-lactic” over and over. “Mother…” being a definite highlight, “Constellations” is another: with it’s cowbell groove, and it’s delicious melody line that’s traded between analog synth and vocals. Amber Webber’s voice has an almost Jefferson Airplane quality to it, which really compliments the overall 70’s-pysch-metal sound. One of Webber’s best moments comes on “Line Them Up”, which has her performing some chilling harmonies that eventually give way to a cinematic string part. The almost ever-present synth pads and organ give the songs an enveloping, “Great Gig in the Sky” feel. Coming from a producer that’s given us the west coast’s most notorious noise/metal/drone act, the sheer “bigness” of the sound should come as no surprise. The sounds that are present have been meticulously crafted and the orchestration is impressive to say the least. Buzzy analog synths and acoustic guitar blend together like a Heavy Metal story of vikings finding a crashed UFO. There’s never a single moment where something sounds out of place. On IV, Black Mountain have created something truly and un-ironically epic, though it’s not without its faults.

The imagery in IV puts the listener in mythical worlds. “You Can Dream” talks of “aeroplanes [that] land in the sky”, and begs the listener to give in to the power of their subconscious. To continue with a comparison to sci-fi/fantasy magazine Heavy Metal, these concepts can sound great to a bonged-out 17-year-old, but can sound tiring to their 31-year-old self. If you’ve ever read the comic/magazine, it can be both engrossing and frustrating. Sure, the concepts are far out, but they can get repetitive. Things can get used over and over until it feels as if the writers are just spouting gibberish. Sadly, there are a few hints of that on this album.

The concept as well as the word “confusion” gets used a lot. I mean a lot. At one point they find themselves “wrapped in a ball” of it; it’s cringe-worthy. On another note, “Cemetery Breeding” features a character describing an eventful evening “fucking in the graveyard”. Now, there’s nothing wrong with taking on this concept, but Father John Misty’s “Hollywood Forever Cemetery Sings” pretty much closed the book on “banging-a-girl-in-a-graveyard” songs. It’s not much of an improvement either, with lines like: “When you looked in my eyes/I was dreaming of suicide” or “dancing round the tombstones/cemetery thighs, alive young and breathing” or… Oh, God: “Girl I just want you to know: you’re my everything”. They make the whole song fall flat on it’s face. “Crucify Me” is a beautiful song with frustratingly simple lyrics (“stick a needle in my eye/wanna find my way back home” “I was ready to die… then I saw your face”)
It’s kind of like opening a beautifully wrapped present to find a tacky glass statue of a dolphin jumping out of the water. I mean, there’s nothing wrong with the dolphin… it’s really nice, really well made, in fact: it’s beautiful. It’s just… I’m sorry. Thank you so much for the present, really, I’m sorry I said anything at all.

Lyrics aside, the awe-inspiring production and songwriting on IV are reason enough to listen to it. It really is too bad the band’s way with words doesn’t measure up quite the same.