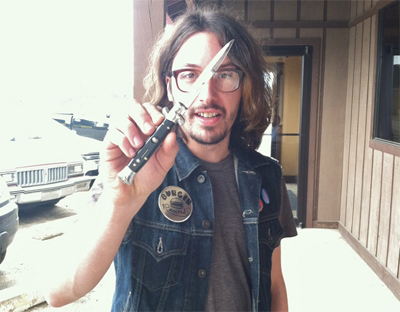 Northern Transmissions recently had a super quick chat with Gabe Fulvimar AKA Gap Dream. His latest album Shine A light is now out on Burger Records.

NT: On Shine A light you decided to embrace a little bit more technology, what prompted you to move in this direction?

GF: I’ve been using synths for a longtime but just decided to allow them to be used in Gap Dream.

NT: The album really has a number of influences from Georgio Moroder to Robert Fripp, were you immersed in these artists during the recording sessions?

GF: Yes. Before, during and after I guess. (smiley face inserted)

NT: The album also combines a bit of that 70s California rock desert sound. You’re from Ohio originally, did you always envision yourself moving to California?

GF: Not really (lol) but I’m happy to be out here.

NT: You live at Burger Records. How is that working out for you? What’s the arrangement?

GF: It’s great! They let me live here so I can focus on Gap Dream. It helps a lot and I’m thankful for them.

NT: You teamed up with ‘King Tuff’ on the single “She’s On Fire”. How did you guys end up working together?

GF: He needed to record a song and I was like “Yo!” (smiley face inserted).

NT: Are you discouraged at times with the immense popularity of genres like House or Dub Step where guys at times play pre-recorded before thousands of people?

GF: Nah, I only get discouraged by myself and I try not to let that happen too often. Lol.