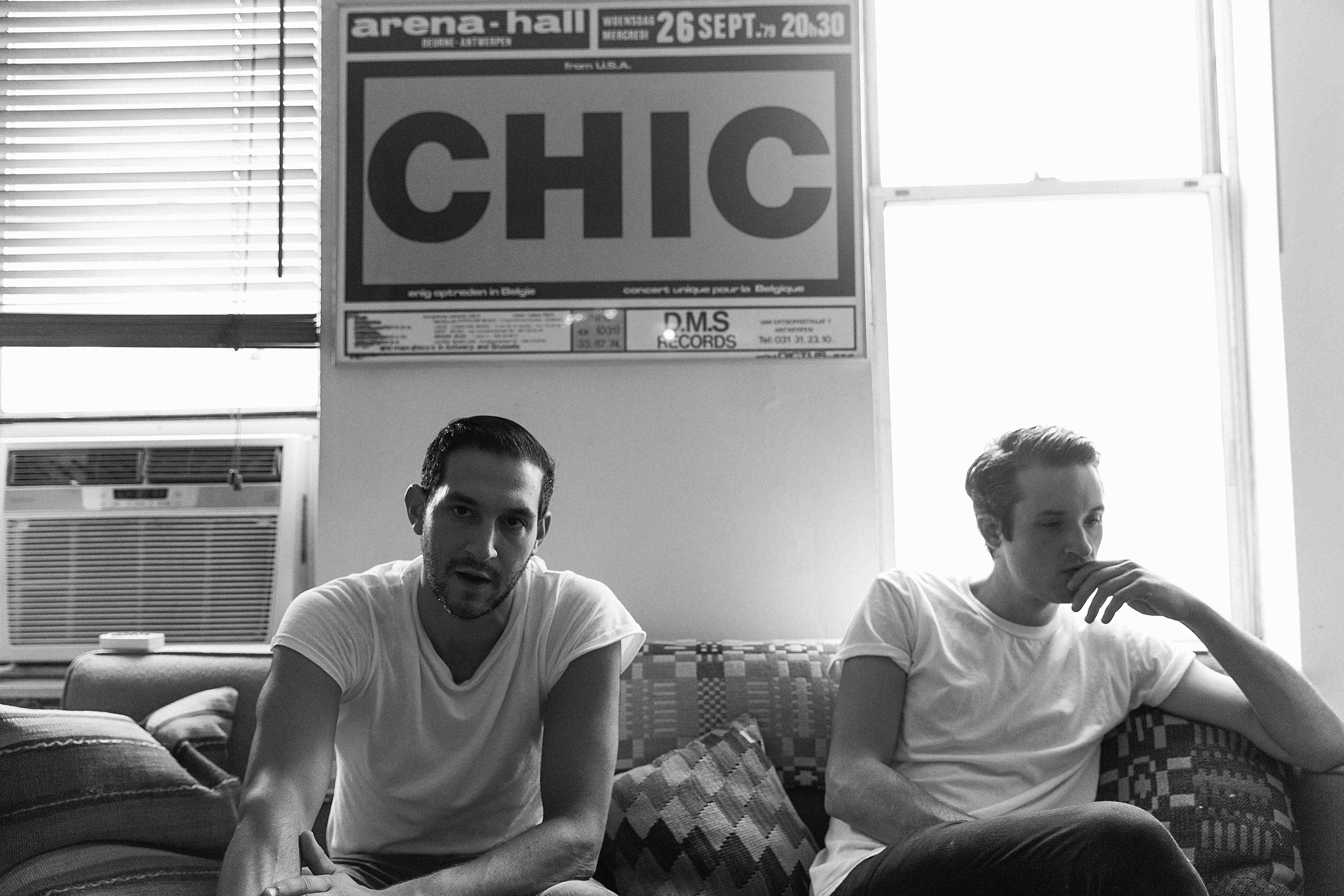 What do you do when you’ve done remixes for a vast range of well-known artists like Katie Perry, MGMT, Moby, Phoenix, and LCD Soundsystem? You collect some of the best ones, add in a few cracking unheard tracks, and put together an album that showcases your skill and unique “labor of love”, live-infused approach to reworking songs. And that’s what Holy Ghost! have done. The synthpop/electro pairing of Nick Millhiser and Alex Frankel, straight out of Brooklyn, have just unveiled the impressive 20-track album Work for Hire on DFA. They’ve been making music since they were in school together, and have been releasing music as Holy Ghost! since 2007, including an EP – Static on the Wire – and two solo albums – Holy Ghost! and Dynamics. Now they are setting out on an all-vinyl DJ tour, including some dates with Empire of the Sun. Northern Transmissions wanted to hear more from the dynamic duo of Holy Ghost! Alice Severin asked Nick Millhiser about the new album, recording, and lessons learned from an incredibly early start in the business.

Northern Transmissions: You’re about to release a collection of your remixes, Work for Hire. Was it hard to decide which tracks to include?

Nick: Yes and no. The decisions were sort of made for us. We tried to go the completist route and include everything but as a result of licensing restrictions that basically limit the number of tracks from one specific label we could include on the compilation, we had to pick and choose. Without getting too caught up in legal mumbo jumbo, basically we couldn’t have the LCD, RAC, Mark Ronson, Donna Summer, 2 Katy Perry tracks and Jazzanova mixes all on the same collection and when the Ronson and Jazzanova mixes proved a little complicated to license for other reasons, that sort of made the decision for us. So we would have loved to have everything but we just couldn’t and Ronson, Donna Summer and Jazzanova mixes are all readily available elsewhere while full quality WAVs of some of the others in list were not. Likewise it was important to include the Katy Perry mix for “Unconditionally” because up until now it had yet to see the light of day.

NT: Your first collaboration, Automato, was signed to a major when you were still in high school, but you dissolved the band not long after. What did you take away from that whole experience?

Nick: So many lessons learned. Here are two big ones. 1) 6 people is too many people to make decisions about anything. 2) Just because major labels have way more money to spend than indies, it doesn’t mean they know HOW to spend it. More money was spent on food per diems (which were usually spent on weed) for that record than Alex and I have spent recording and mixing two Holy Ghost! records. Actual fact.

NT: You grew up in Manhattan, but you’re now based in Brooklyn. How would you describe the difference between the two boroughs?

Nick: I’m not sure there is much of a difference anymore. Isn’t Manhattan the new Brooklyn?

NT: Hanni El Khatib – Two Brothers (Holy Ghost! Remix) (2015) which was previously unreleased, was the first thing that burst out of my headphones. What a track. How did this one come about?

Nick: I think one of our managers sent us that record and we really liked that song. We recorded the drums pretty fast and then came up with the main Clavinet groove after some false starts down other roads and listening to some Eric Duncan tracks – namely his Danielle Baldelli remix and his Debbie Jacobs edit of “High On Your Love.” The guitar part came about as the result of a recently acquired Roland Space Echo. We used to record guitar with these all the time (see the remix for Only Fools and Horses and our track “Static On the Wire”) and we’ve owned and sold many of them over the years but hadn’t owned a good working one in a while. So once those things all came together we came up with a few simple horn lines, had the great Jonathan Powell come in and play them and then it took shape rather quickly.

NT: How do you choose the songs to remix? Are there particular artists you want to work with? And do you decide right away, or do you try out a couple of tracks and see which one is doing it for you?

Nick: Well usually we don’t choose. People come to us and ask. Of course sometimes we have to say no because we don’t have the time, or we don’t like the song or maybe we like the song but just don’t have any ideas of what to do with it; but generally we don’t go to artists and ask them. The three exceptions being the very first remix we did for Panthers “Goblin City” and the last two for Jose Gonzales and Hanni El Khatib. Having never done a remix before and thus unlikely to ever be ASKED by someone else to do one, we asked Panthers for that song because we loved the guitars and vocals and hoped that getting our toes wet might lead to more work. Luckily they obliged and low and behold it did. With the last two, we wanted things we knew would be fun and relatively simple. But there’s no specific thing we’re looking for. Sometimes it’s a nice melody that we can imagine in another context or played on another instrument and a great vocal usually makes things easier. But sometimes a great vocal can be restricting too. Sometimes a pretty blank canvas is the best starting point. So, yeah, no rhyme or reasons. We sort of take it song by song.

NT: You’re about to go on a tour, playing all vinyl. What do you attribute the new resurgence of vinyl popularity to, and why have you chosen vinyl for the DJ sets?

Nick: The decision to do an all vinyl tour was really just for shits and giggles. We have no beef with digital DJing, be it with CDs, USB sticks, Serato, whatever. We’ve tried them all and most often use USB sticks ourselves actually. But we started playing on vinyl and both still buy a lot of vinyl and for us it’s still the most fun medium to DJ with. Combing through a big bag of 12″x12″ objects is way more fun than staring at a tiny LCD screen with abbreviated track names. Likewise, on the right system it does indeed sound better. But, honestly, just for fun. It makes it more exciting for us and, in turn, hopefully that makes it more fun on the dancefloor as well.

NT: Your music takes 70s disco and 80s electronica and new wave as influences. If you could go back in time to that era, where would you go?

NT: And five albums that you’re still inspired by.

Nick: Tough question. So many but here are five randos…