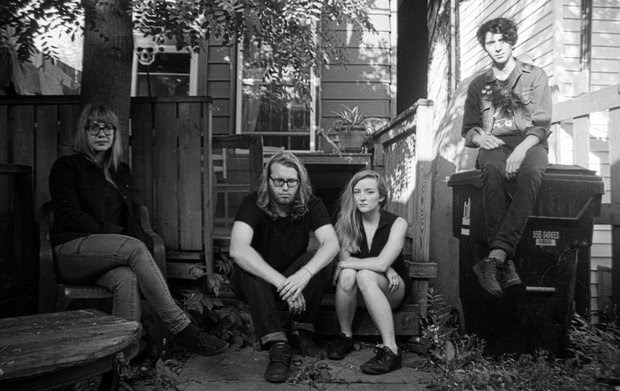 Today, HSY is proud to share their video for “Scratch” via Buzz Records. “Scratch” is the first single from HSY’s debut LP, Bask. All buzzsaw guitars and an energetic rhythm section propel Jude’s guttural vocals to provide an intense experience. Bask will be released on Buzz Records on September 11, 2015.

According to Jude “Scratch” was the first song written for HSY and addresses his own youthful self-regard. “It’s basically about being an ego maniac and thinking your gods gift to women when, really, you’re just a smelly 20 something with nothing really to offer anyone,” he says, “a love song to myself of sorts.”
The video for “Scratch” was directed by Chris Chami.

With its roots in the now-defunct Buzz Garage in Toronto’s Chinatown, sludge-punk outfit HSY was originally formed in 2011 by the mononymous Garage co-founder, Jude. Almost three years on from their first incarnation the band, now with a full line-up featuring Kat Theodorelos, Brandon Lim and Anna Mayberry of Anamai, rejoined to an empty small town church to record their self-titled 2013 debut EP, which was released on Buzz Records.

In the wake of the EP’s warm reception HSY embarked on tours of the US and UK in 2014, sharing the stage with White Lung, Deerhoof and labelmates Odonis Odonis, and releasing the AA-side 7” Cyber Bully b/w Phantasm Blast via Too Pure and Buzz.