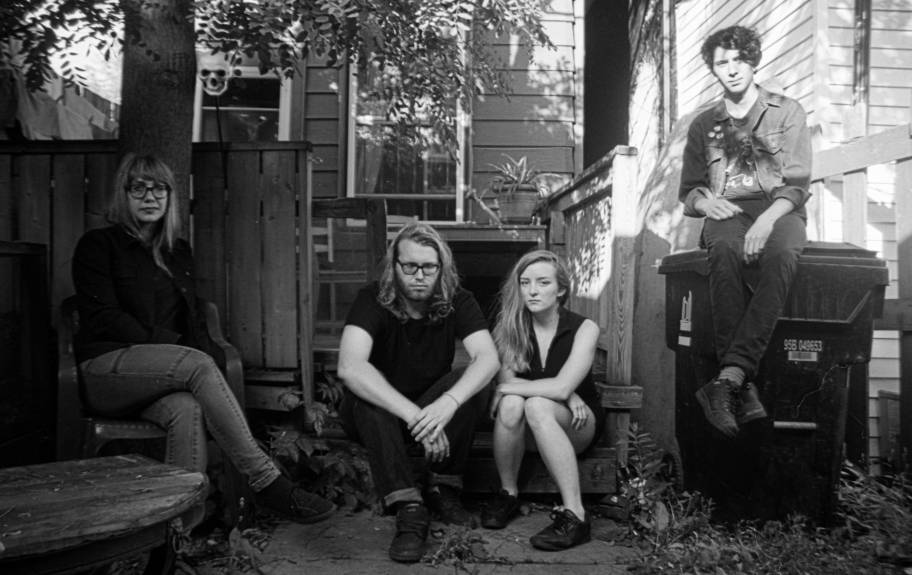 “Feeder” is the second single from HSY’s debut LP, Bask, which is set to come out September 11th on Buzz Records. Featuring lead singer Anna Mayberry, her vocal style is quite distinct from her performances on the recent LP from her side project ANAMAI. According to Mayberry, “The song is about shared values. You are made of money and that money is worthless. Fun is work. Eat your job. Is this thing working? What an asset. Sometimes when you eat I get hungry. Let me feed you so that you can’t talk to me.”

With its roots in the now-defunct Buzz Garage in Toronto’s Chinatown, sludge-punk outfit HSY was originally formed in 2011 by the mononymous Garage co-founder, Jude. Almost three years on from their first incarnation the band, now with a full line-up featuring Kat Theodorelos, Brandon Lim and Anna Mayberry of ANIMAI, rejoined to an empty small town church to record their self-titled 2013 debut EP, which was released on Buzz Records.

In the wake of the EP’s warm reception, HSY embarked on tours of the US and UK in 2014, sharing the stage with White Lung, Deerhoof and labelmates Odonis Odonis, and releasing the AA-side 7” Cyber Bully b/w Phantasm Blast via Too Pure and Buzz. Following their year of touring, HSY began work on their first LP in late 2014. Recorded with Josh Korody (Dilly Dally, Wish, Beliefs) at his Toronto studio Candle Recording, the album, entitled Bask, captures an exciting moment in the band’s continued evolution and nods to HSY’s enduring interest in black metal.

Bask will be released on Buzz Records on September 11, 2015.