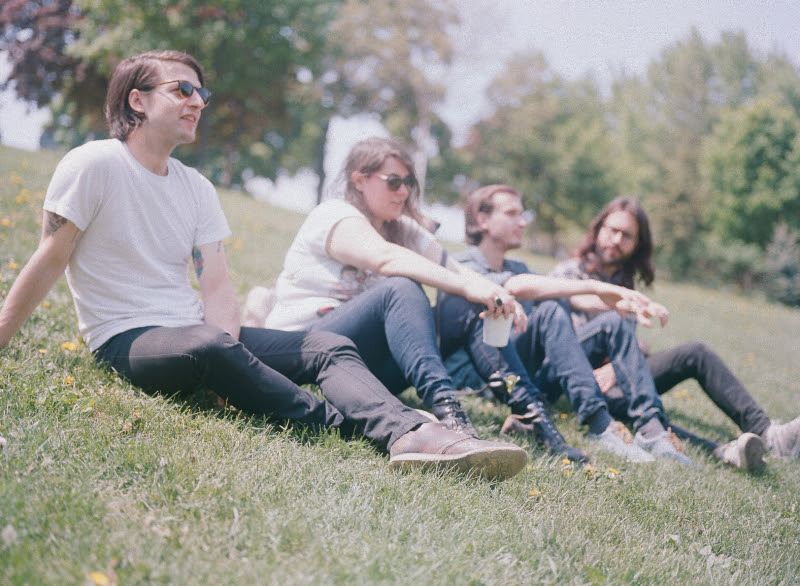 Toronto band Fake Palms, came together as a collection of bedroom demos recorded with a broken drum machine by Michael le Riche in 2011, the project morphed into a band in early 2015 when le Riche brought together longtime contributors of Toronto’s music scene, including members of Hooded Fang and Slim Twig’s backing band.

In keeping with Fake Palms’ stripped back bedroom origins, the group value simplicity and directness. For le Riche this approach is almost an idealogical dictate, “our intention is to do the most we can with the limitations we put on ourselves,” he says, “no backing tracks, no samples etc. We want to make music that is an honest representation of the four of us in a room at that time.” The band’s first single, “Sun Drips,” released in the early spring of 2015

“Sun Drips,” along with their newest single “Sparkles,” will appear on Fake Palm’s self-titled debut LP which will be released on Buzz Records on August 28th.

“Sparkles” was the song from the record that came together in the least amount of time.” says le Riche, “I was in between apartments, renting a place for a few weeks, and just had a duffel bag of clothes, my laptop, and a guitar. The progression from initial idea to completed song took about two hours. It was an experiment to see how off centre we could get musically, counter balanced with classic pop melodies. We change time signatures, the guitars are abrasive, the drums and bass are big and distorted, but at the end of the day we’re trying to make music that you can hum along to.”