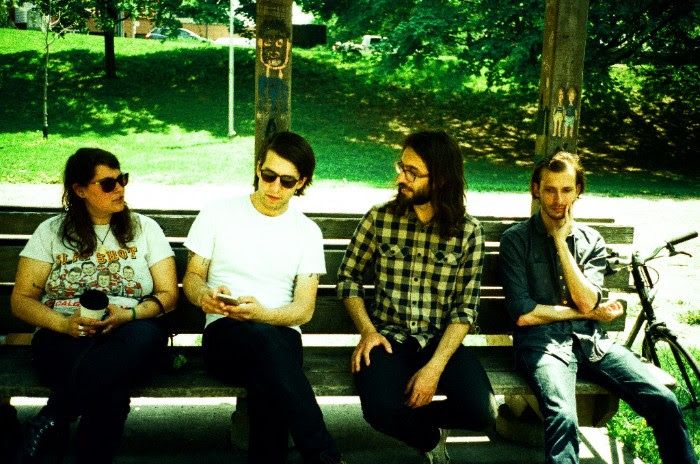 The video for “Fever Dreams,” from Fake Palms’ self-titled 2015 debut LP, is premiering today. Directed by Joel Barnes and Fawcett Sharpe, the video plays with an old cinema trope known as the Catapult Nightmare.

“The last video we shot was outside during the coldest February on record (HSY’s ‘Sally’), so for this one we wanted to do something less arduous and much more inside,” says Barnes. “We realized early on in during filming we would need around 80 locations for the concept to work, so the idea that this would be easier kind of went out the window. Surprisingly friends and strangers were very generous about letting us in their bedrooms… The concept was inspired by the odd cliche in Hollywood films of people shooting up manically when waking from a nightmare.”

With the video the band are announcing summer tour dates, including festival slots at Northside, NO FEST, Grid Lock, Sappy Fest and Arboretum. There are full details below.

Led by singer and guitarist Mike le Riche, Fake Palms have progressed over the last 18 months from a collection of demos recorded in le Riche’s Toronto bedroom, into one of the most exciting bands to emerge from the thriving Toronto music scene. Their self-titled debut LP was recorded in early 2015 after le Riche recruited several longtime Toronto music stalwarts including members of Hooded Fang and Slim Twig’s backing band, attracting immediate attention from Buzz Records. Tracked in a series of stripped down, live of the floor sessions in keeping with the project’s bedroom origins the LP, released on Buzz in August of 2015, garnered praise from Pitchfork, Stereogum, Fader, and Noisey among others and propelled the band into a prolonged stretch of touring with bands like Alvvays, Protomartyr, HEALTH and Destruction Unit, solidifying Fake Palms’ reputation as a punishing yet dynamic live act.

The band are currently in the studio with producer Josh Korody (Dilly Dally, Weaves, Fucked Up) working on an EP to be released on Buzz in the Fall of 2016. According to le Riche, the new material is reflective of the time the band has spent together as a unit, and broadens the scope of their approach to production while maintaining a commitment to directness and clarity.
“With the EP I think we’ve found our footing in something new, albeit a logical progression from the first record” he says. “In terms of songwriting and production we tried to be as economical as possible and everything feels very tightly wound. The recording process was quick with most conversations revolving around what was essential to the song. We’ve started to write more as a group as well, so everyone’s influences and tastes are starting to come through a bit more than before. All in all, I believe it’s more cohesive and I think of it almost more as a mission statement than just a new batch of songs.”