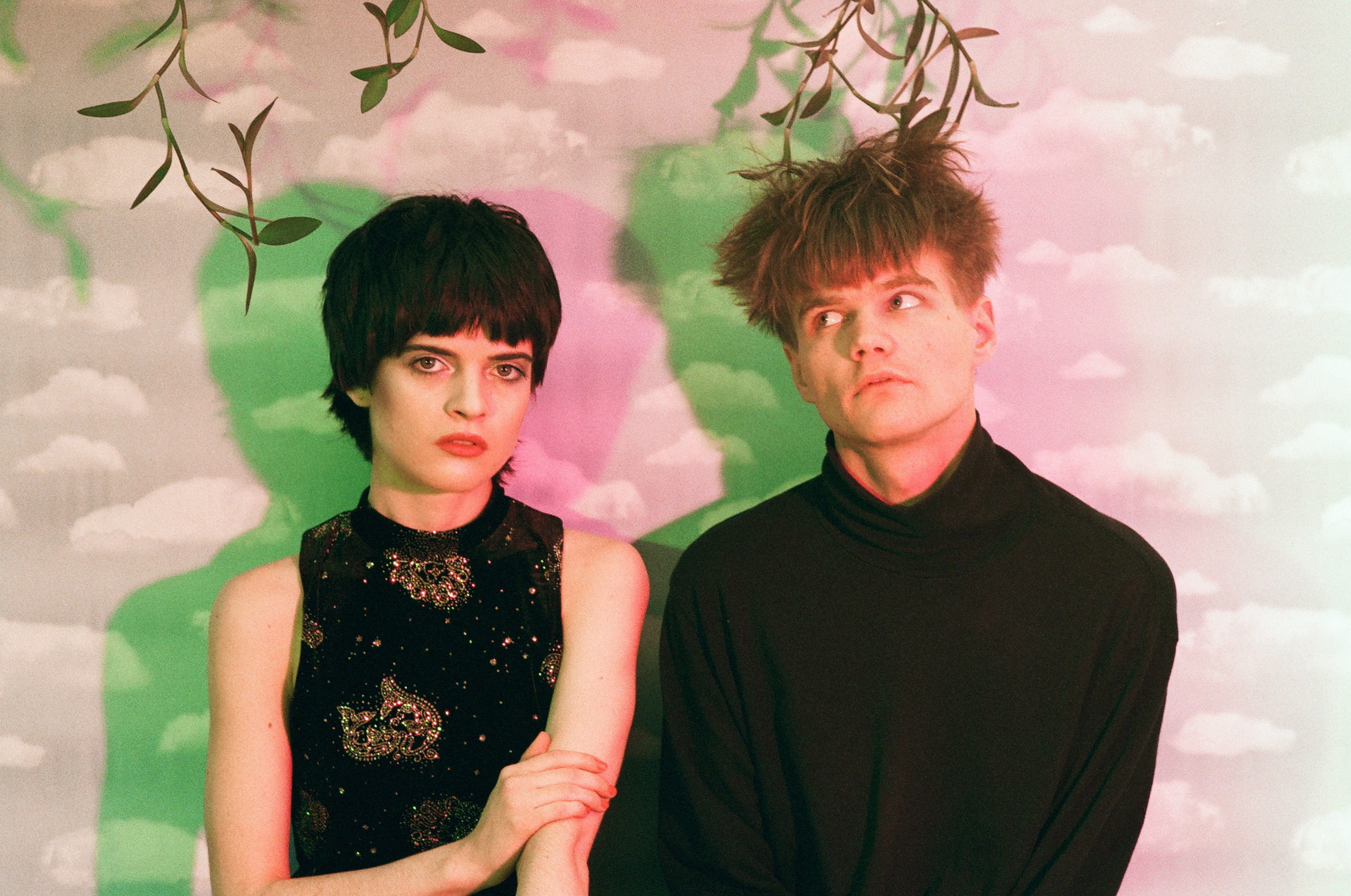 Few bands stand out quite like Montreal’s She-Devils. Since the duo started working together their unique sound that samples old music and mixes it with their own analog stylings, along with a stark live show and their eye-catching sense of fashion has caught the attention of music lovers beyond their own town. With their upcoming self-titled debut LP arriving on May 19th, we caught up with singer Audrey Ann Boucher and producer Kyle Jukka to discuss the record, their beginnings and just how they get their samples from point A to point B.

Northern Transmissions: Looking at the upcoming album you guys have shifted to more upbeat sounds, and even surf-styles, what caused the shift and what drove you to the sound?

Kyle Jukka: I think the first batch of songs we had were inherently more surfy.
Audrey Ann Boucher: We’re into that era a lot too. For me when I watched Pulp Fiction I got really into listening to the soundtrack, and put it on all the time, and so much of it has that surf sound.
KJ: Maybe I just don’t identify that sound as surf because it’s so present in American music of that time, but it is kind of surf.
AAB: We were also really into the Tornadoes when we recorded and wrote the songs.
KJ: That too. British rock music that is impressionistically dreaming of California, and their take is what’s interesting.

NT: Will there be any other sound that you’re pulling from as heavily on the new record?

KJ: We just want to make a really cohesive picture and end up taking cues from a lot of different stuff.
AAB: There’s some songs in there that are a bit more crooner-y, emotional. The songs that have come out are less like that. In the future I want to separate myself from that but it was important for trying things and doing what felt natural with our influences.

NT: Is there a reason behind your selective digital releases and if so is it to encourage the live show?

KJ: It’s not deliberate. If it’s taken a while to put out recordings it’s only cause we haven’t found a good way to do it well. We’re still learning, it’s not like what we’re doing is going to be perfect, it’s just the best we can do for now.
AAB: We let songs evolve a lot with time as well.

NT: How exactly do you guys write your music both on a creative and technical level considering how much Kyle is doing while you’re on stage?

KJ: For me I like using mixtures of things to create new sounds. Sampling’s really just appropriating texture but I also spend a lot of time f*cking with guitar sounds and just blending them together. I like different ways of making music that could sound like electronic music, but I don’t like electronic music that sounds electronic. Those elements mixed with the experimentation make it harder to pin down. That’s where it starts for me, just mixing samples and textures with beats together in the way a hip hop producer might make beats like a tapestry. Then I hand it to Audrey and she follows her instincts.
AAB: Ya it’s funny because we’ve tried different samples, that are more charged and Kyle has worked on a lot versus barebones ones. A lot of the time I can’t work with the ones that have a lot in them already because I need them to be minimal and simple. I need to have control over it. But once that’s done, I have a simple loop and I write something, give it back to him, and he’ll put so much more over it.

NT: How do you discover your samples?

KJ: For a lot of the stuff we’ve been doing, it’s a surrealist vision of a rock and roll band in a space age future. So if it sounds like 50s and 60s music but with this spacey element, that’s the sweet pocket for me. The samples just come from music and just being stoked about a lot of music. Hearing small sections and thinking it would sound cool to loop it, and blend it into a tapestry.

NT: How do you translate such a weird composition and writing technique to something live that you can play?

KJ: It’s similar to Feng Shui, where you’re trying to obtain the right balance between objects, for example if I just sampled huge chunks of the album and played that live it would feel weird. So I try to make it simple and more primitive, focusing on short loops of my own playing, and blend it with a sound. It’s about working it into the tools that we use live rather than the tools that we use for an album. I feel in the future I want to make them more one and the same.

NT: Your live show reminded me of old 60s performances, is this all part of the feeling you’re trying to create or did it just feel like the most natural thing to do?

AAB: I’m definitely not trying to emulate anything. I’m really shy so when I perform, the less I can do the better I feel it is. Which is something I want to change because I’d like to get more comfortable on stage. I also like to mess with people, give them looks, assert my dominance but with my eyes. I like to use my face a lot when I sing because it feels natural but I’d like to use my body more in the future.

NT: Was there something about the older sounds and newer sounds that made you want to mash them together?

KJ: I think it’s just a combination of our instincts. In the beginning, Audrey’s voice just seemed to work really well with the texture of that time, so making loops of that and having Audrey sing on them really worked. Then the futurism just comes from the way I work and mess with sounds, the vision of the Jetsons or something.
AAB: At the time we had also just discovered the space age music of the sixties. I really like that retro mixed with futuristic, proto-electronic music. We’re definitely future focused people.
KJ: I would really hate for us to sound like we were just recreating an old sound. It’s cool that some bands do that but I would not feel good about it if that’s how it was. That’s not the motivation.

NT: Even though you both met at Torn Curtain what drew you two to start working together?

AAB: We related a lot and our tastes overlapped, and that’s something I don’t feel with a lot of people. When we first started making music it wasn’t going to work because Kyle was very jam oriented, everything was very in the moment. I would just freeze and nothing would come out of my mouth. At some point we let go and decided this wasn’t working and then it kind of clicked when we figured out what we had in common

NT: On your recent work it sounds like you’ve shifted down your register or have filled your voices tone more, how did this change come?

AAB: I think it’s cause when I started singing I didn’t have lessons or anything, it was just something I was doing intuitively. It’s just natural that the more you do it the better you get at it, and I focused more when I recorded my vocals to teach my body with vocal warm ups. If I try to do it with my head I can’t do it, it needs to be reflexes and intuition.

NT: Is there anything else you hope people take away from this record.

KJ: I hope that people connect with it in the same way I connect with all my favourite music and just see the spirit of it, and connect with your imagination. You just see something in the music that makes sense to you.
AAB: A lot of people have labeled us as being dark and mysterious which isn’t untrue but there’s a lot of colour in the album and I hope people can see that.

NT: Any plans for the next few months besides the record?