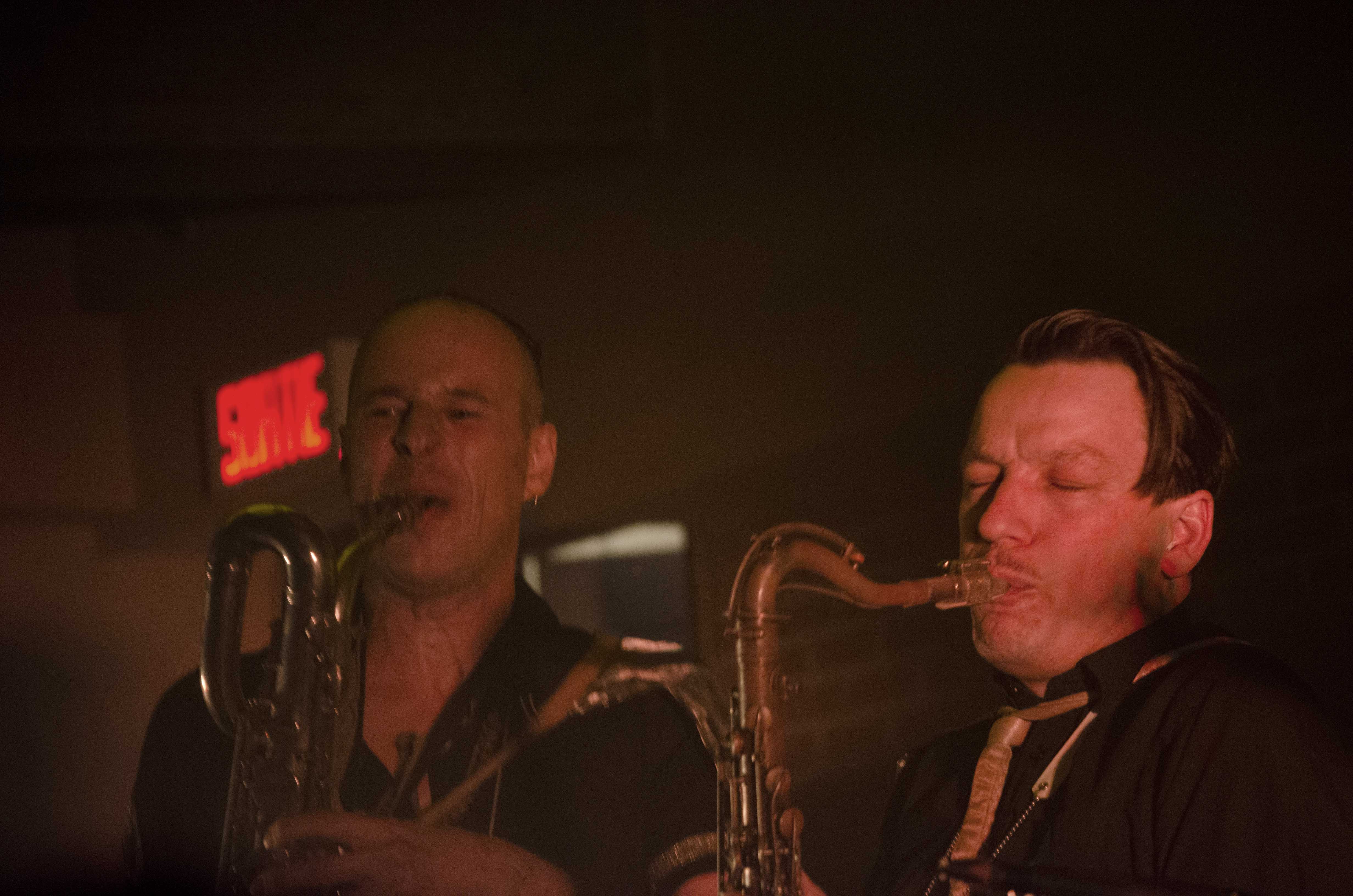 King Khan
Share on TwitterShare on PinterestShare on PocketShare on RedditShare on FacebookShare on Email
Montreal was busy to say the least on Thursday as night two of Pop Montreal 2018 was in effect, and picking even a handful of shows to move between was a tough feat. In our trip across venues this night we caught some great up and comers, soothing professionals and one of the best rock shows around, period. From early on in their set, Smokes brought introspective rock with tons of unique sounds from their vocal effects alone. Though their vocalist was pretty reserved between songs, he really learned into his performance when it came to the music itself. As many soothing tones as their violinist pulled out, he would just as quickly use his strings for a more demented approach to his instrument. This string player also made great use of his full pedal board to elicit some truly unique textures, and at times it almost seemed like he was playing a synth. Along with this was a a vicious drum and bass combo that kept a punk edge to everything else, while the duo rocked out where their other members were stuck in place. Early days as their live show is now, they clearly have the music and spirit to take it further. After bouncing between venues to catch a handful of opening sets for the night where many bands would take time to get into, Penny Diving’s tight and intense sound was instantly gripping. Their smooth sound was parts grimy and sunny, recalling tones of My Bloody Valentine with the writing of fun indie dream-pop. Their writing would stray off simply fun power chord rock to drop into mesmerizing little breaks to explore the outer ends of their sound. They even took spacey dives later in their set, and threw listeners into a cosmic haze between all the reverb and entrancing vocals. Overall their most potent force was the synergy that made the any one song song hit you all at once and marked an overall step up sonically from any other opener before them. With Paul Murphy and co. packed tightly on their small stage, one could’ve easily expected a subdued and pensive set from Postdata, but they quickly proved that just wasn’t the case. As the band’s productions grew explosive and borderline psychedelic from otherwise acoustic starts, they had the Montreal audience swaying and rocking along with them. Even their folksy guitar songs were burning with fiery vocals and a sense of passion that carried through the set to elevate any track. Murphy’s ability to switch from mild-mannered singer to soaring emotion in any song just gave the set a sense of dynamics and unpredictability that made every track a wonder to hear.

The band was also force of its own behind Paul as they not only provided support but could just as often create a rollicking drive all their own. In several later songs, the whole band collectively traded riffs and even had the drums interpret guitar lines. In their moody playing however Postdata hit its highs by making their tight space feel dark and haunting. As they hopped between different styles of fast and upbeat rock, Luna Li asserted herself with an infectious attitude that made all her songs more fun to listen to. With smiles flying between every harmony, you could tell that the band was enjoying themselves as much as the crowd. Later in the set Luna would layer loops with her guitar, then violin, then back to guitar to make hypnotizing walls of sound. In these moments the other instrumentalists would join as a vocal trio rather than players to shake up the overall makeup of the show. The set revolved between hard-rock, dance-rock and offered tracks as new as their latest single or even Luna’s first song which was written during her stay in Montreal. With his band taking up all the room on L’Escogriffe’s small stage, Michael Rault focused on his songs above all else. As he launched into “I’ll Be There,” Rault wasted no time hitting great vintage rock notes and never missed a riff with his band. This smoothed into “New Day Tonight” as Rault started to groove with the Montreal crowd and his silky playing had everyone in a trance. He elicited some classic rock shouts however on “Sitting Still” as its majestic guitars wowed listeners while recalling a bit of Led Zeppelin across a set that was as full of character as it was welcoming in its familiarity. No matter how much fun I had between all the other bands that night, there was a palpable electricity in the air as the King Khan & The Shrines set started. With Khan taking the stage with a tomahawk, the massive band went into a hectic bounce and had the Montreal crowd doing the same. Pulling from songs across his career, Khan would be just as personal with the crowd as he was goofy. Between all his band’s rushes through the audience, the Montreal audience was constantly in an intoxicating sway that just made you want to move more. The energy was so contagious you rarely needed to know a song to get lost in it. Between several costume changes, fans licking guitars (to the band’s confusion) and just as much crowd-surfing from the band as other audience members, this set was all about having a good time.