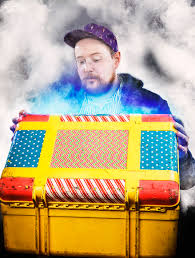 Today, Dan Deacon has shared his new single ‘Learning to Relax.” The track comes off his forthcoming release Glass Riffer, which comes out February 24, 2015 on Domino Records.

“Learning to Relax”, took shape while being performed on the road last year while on tour with Arcade Fire, it is another exploration of Deacon’s newfound appreciation of tracks featuring predominate vocal melodies. It’s one of the many songs on Gliss Riffer reveling in equal parts exuberant uncontained good times as well as dramatic flair. The same could be said for the “Learning to Relax” animation created by Alan Resnick, as described by the creator himself: Two parallel columns of cubes are colored with complementary gradients. The cubes oscillate at faster and faster rates, which create the optical illusion of color mixing within elaborate visual patterns.

Deacon has also announced a North American April/May 2015 tour that will follow several release week shows later this month in New York, Los Angeles, and San Francisco. Next Tuesday, Dan will be playing a special Boiler Room show in London. Watch a live stream of the show on Tuesday, February 17th 2pm EST. All tour dates are listed below.

You can download the stems to “Learning to Relax” and ‘Feel the Lightning’ below.