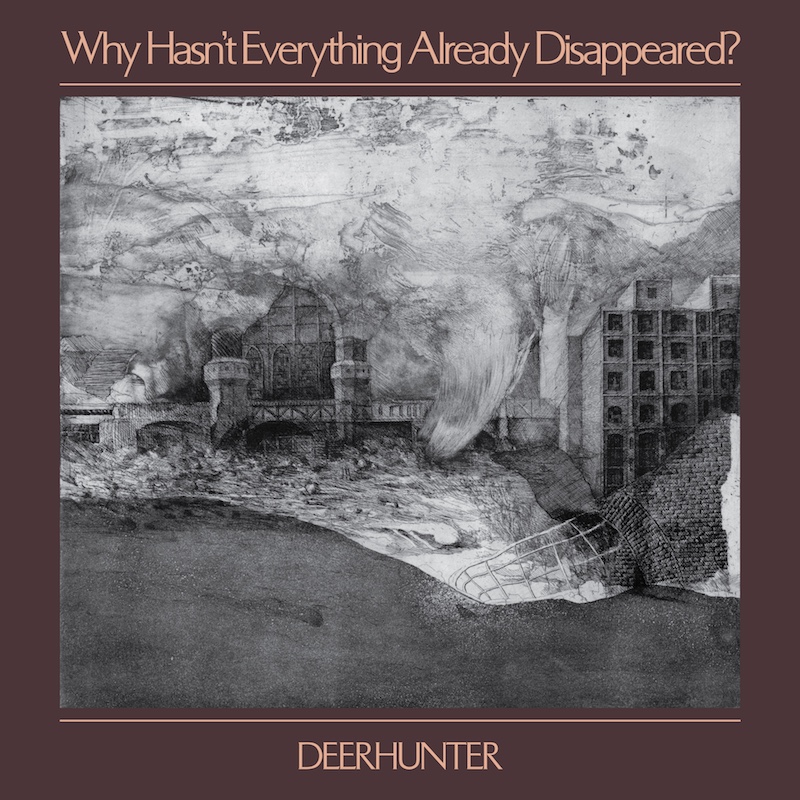 Why Hasn’t Everything Already Disappeared?

Deerhunter’s eighth album, Why Hasn’t Everything Already Disappeared?, was inspired by Marfa, a ghostlike West Texas town where they recorded parts of the album. (Other recording locations included Los Angeles and Atlanta.) “There is a feeling of disappearance here… The desert just has a lot of disappeared things in it. It’s where things have disappeared to,” singer and guitarist Bradford Cox has said of Marfa.

Specifically, WHEAD is, per a press statement, “concerned with the disappearance of culture, of humanity, of nature, of logic and emotion.” Indeed, WHEAD is bleak, if not outright morbid. Cox sings of his friends on “Death in Midsummer”: “They just fade away. Some worked in hills. Some worked in factories, worked their lives away. And in time, you will see your own life fade away.” And later: “They were in hills. They were in
factories. They are in graves now…. Walk around, and you’ll see how it fades. Walk around, and you’ll see what’s faded.”

The mid-tempo “No One’s Sleeping” bursts with optimistic sax. But anxiety always seeps into Cox’s lyrics, weighing down the music like dew clinging to leaves. “Great unrest. In the country, there’s much duress. Violence has taken hold,” he sings. If no one’s sleeping, Cox certainly isn’t either.

Despite the grim reality WHEAD draws attention to, songs like “No One’s Sleeping” show that sonically, the album is an exuberant and tightly knit pop record. That might be the result of working with Welsh singer/songwriter Cate Le Bon, who replaced Deerhunter’s long-time producer, Ben H. Allen.

Harpsichord, played by Le Bon, opens the album on “Death in Midsummer”. Saxophone blows “No One’s Sleeping” towards unreachable heights where cloudbusting synthesizers soar. “Futurism” might be the least complicated piece of pop Deerhunter have written.

Deerhunter have been leaning into classic rock, noisy punk, and garage rock over their previous two albums, 2015’s Fading Frontier and 2013’s Monomania. But WHEAD contains moments conducive of mental clarity, too. “Tarnung” undulates atop sparse xylophones and the breathiest saxophone.

“Détournement” resembles a relaxation tape. The narrator’s drowned voice flies the listener around the world, across oceans. “Good morning to Japan,” he says. He repeats the same greeting for Europe, Spain, Russia, America, and Australia. But the calmness fades. Drums and piano intrude the tranquility. He says hello to eternal jet lag. “And time starts to run backwards.” As the sense of time becomes skewed, so does any sense of place, despite the narrator reciting place names like memorization cards.

The only patch where WHEAD loses cohesion is on closer “Nocturne”. Cox’s filtered vocals are clipped. The lumbering melody and toy-like quality of the song call to mind the Unicorns, at least in the first third of the six-plus-minute song. “There are no boundaries left to cross,” Cox sings. That isn’t true of Deerhunter, but they’ve made a huge leap with Why Hasn’t Everything Already Disappeared?.