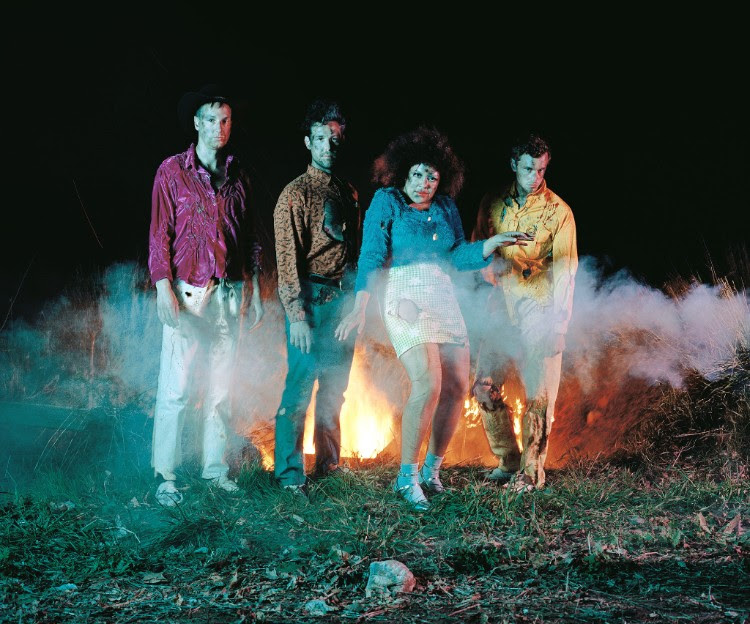 Today, Weaves have announced their new album, Wide Open. Wide Open is due out on October 6th on Buzz Records (Can), Kanine (US) & Memphis Industries “#53” is the album’s leadoff track, and sets the tone for a record that sees the band embrace an expansive sound that they have only hinted at on previous releases. Driven by an ascending guitar line and the frantic energy of the band’s rhythm section, who build to a dramatic crescendo that mirrors the intensity of singer Jasmyn Burke’s urgent performance, the track was, according to Burke, written in a burst of creative energy the band built up over the course of a year spent on the road in support of their debut.

“We got back from the tour with Mitski on November 22nd and I started writing November 23rd,” she says. “We spent three months writing and pretty much figured out the album in its entirety in that timeframe. With the year we had I think we really hit this sweet spot where your brain is fully ready for something new, but has absorbed all of this information and it all just spews out. It was all really based on initial instinct and we just sort of let music happen.

“When writing #53 I let out how I was feeling about a lot of things. Existing on the road, existing at home, living in a time when a lot of younger people feel helpless — it’s all given me a new vigor and desire to be ferocious with our music.”

Weaves began recording Wide Open, which is due out October 6th, 2017 on Buzz Records, Kanine & Memphis Industries, in early 2017. Assisted by engineer Leon Taheny (Austra, Fucked Up) who worked with them on their first LP, they approached the album as a high wire act – walking the line between intention and their own gleefully anarchic creative impulses.

“The recording was mostly based around live off the floor playing with all four of us, and we tried to navigate a balance between thinking and not thinking,” says guitarist Morgan Waters. “We find that we don’t really figure anything out with words or rehearsing so for the most part we just didn’t. Sometimes it’s better that we don’t try to control it and there’s something nice about allowing yourself not to be in control.”

“Playing so many shows people come up to you and maybe identify with a song, or just say that what you did brought them up in some way, and it made me think about the context and what it means to share your personal experiences,” says Burke. “Maybe I was hesitant to be more forward in the past but I think I needed to get over that. It felt right to try to represent my own experience in the world while knowing that everyone in my age group is poor or having a tough time with life in one way or another, so I was thinking about how to blow those feelings up into these kinds of songs. Blowing up a regular life into something like an anthem. In a way I was thinking about it like Bruce Springsteen, but in a lot of ways my experience of the world couldn’t be less like Bruce Springsteen’s.”

“In making this album I didn’t feel any pressure or any fear, and I think that might be the difference between this album and the last,” Burke reflects. “It’s been a weird year, and even on the album cover we’re in bright colors, but we’re covered in soot and we look like we came out of an explosion and I think that’s kind of the way life is. Hopefully you can bring some light to people.”