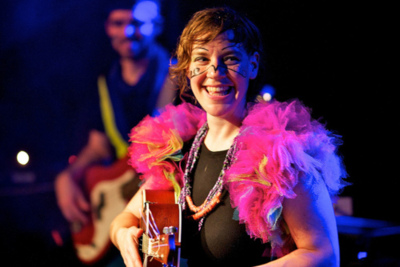 “Mango” the new collaboration between Tune-Yards and Lakeith Stanfield’s musical project Moors, out today via Haven Sounds. The duo connected with Stanfield through their work on the film Sorry To Bother You, which they scored and stars Stanfield.

“We became big Lakeith fans by spending hundreds of hours scoring Sorry To Bother You and watching his incredible acting skills,” says Tune-Yards Merrill Garbus. “We met at the Sundance premiere, and Lakeith was really into the score so we talked about collaborating.”

Lakeith Stanfield and Tune-Yards recorded the song in the band’s Oakland, CA studio. “He had really specific ideas about the track, different characters he wanted to give voice to, and we worked together to keep amping up the weird,” says Garbus. “Times are weird. Lakeith is reflecting his universes and creating new ones — it’s fascinating and important and we’re grateful and lucky to be a part of amplifying his voice.”

Over the past several years, Lakeith Stanfield has performed roles in Sorry To Bother You, Get Out, Selma, Straight Outta Compton & Atlanta. Stanfield’s breakout role was in the independent film Short Term 12, in which Stanfield first showcased his rapping talents with his Independent Spirit Award-winning performance. Shortly after that, Stanfield met the LA-based producer and host/creator of the popular podcast Song Exploder, Hrishikesh Hirway and the pair formed Moors. The duo have quietly built a following, beginning with the release of their 6 song debut EP in 2014.