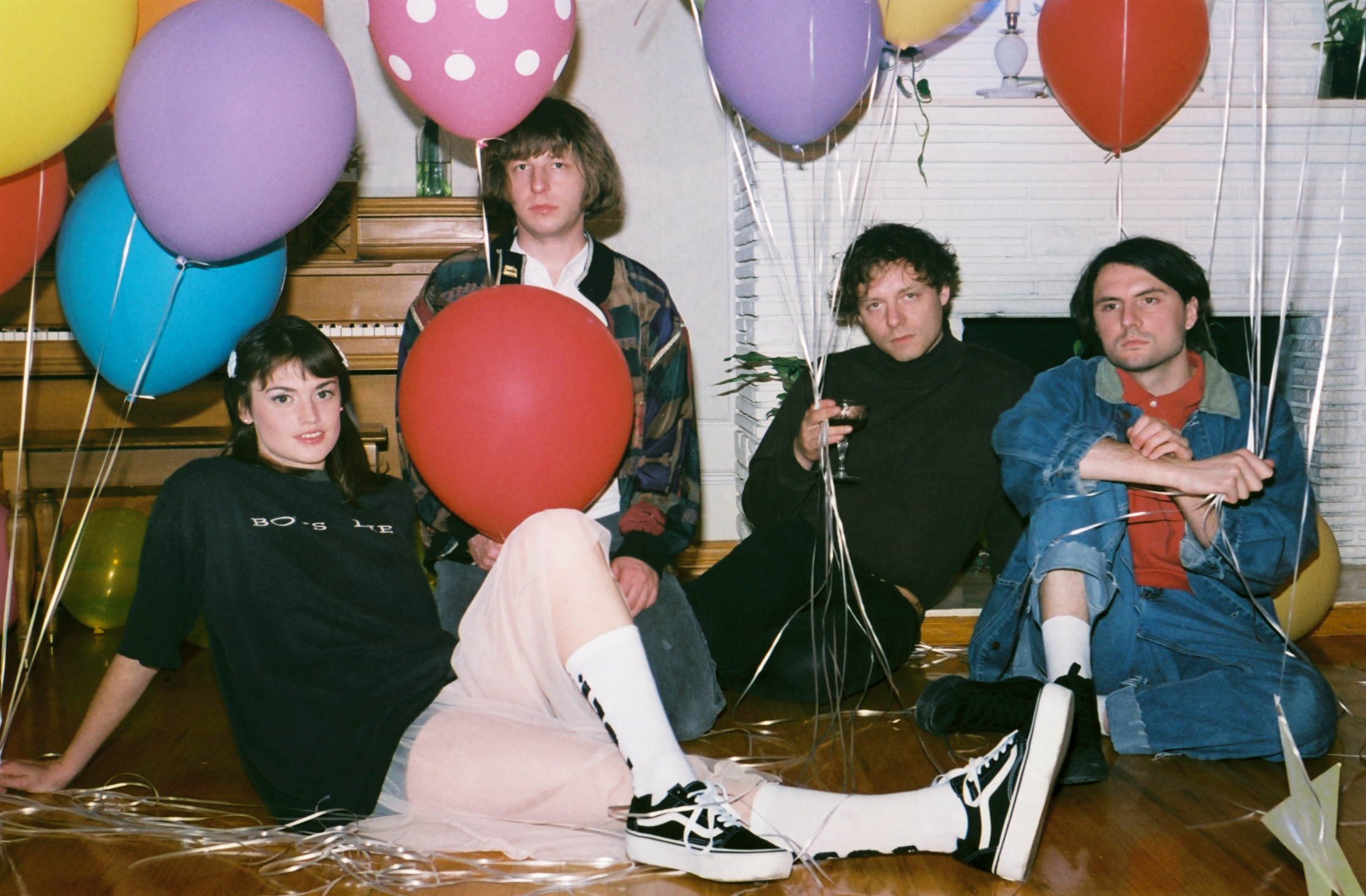 TOPS is one of those bands that’s always evolving in some way. Since their start in 2011, the Montrealers have seen bassists come and go, and sounds fall in and out of their pallet. Given all their change over the years, they decided to head to L.A. for their latest record, Sugar at the Gate, to get their headspace right and make the record flow. We caught up with member Jane Penny to talk about their changing rhythm section, going to L.A. and even some of their work before the band.

Northern Transmissions: Looking back to when you guys started, what did you want to do to standout from your previous work as members of Silly Kissers?
Jane Penny: Silly Kissers was kind of a joke to be honest. David would just make the songs with a computer and we would play them live to do shows in Montreal. It wasn’t too hard to think of a way to do it differently with TOPS. In TOPS it’s actually us all playing instruments, it’s a real band. It’s nice that we have that production know-how to still do that but it was really naturally a different thing.

NT: I know you’ve had a bit of a rotation of bass players over the years, so how do you feel it works within the core of the band now?

JP: For us basically, we started the band with Tom, he was the main member of the band. It didn’t make sense for him to keep playing with us, he wanted to lead his own projects. Then we had a lot of different friends fill-in, where they would play the parts but not write the parts. It’s been Dave on recordings, but friends playing live with us. We didn’t have another bass player for writing and recording until now with Jackson MacIntosh. We’re working on recordings with him, and we all switch instruments. It’s nice when we record now, before when we would rehearse for writing sessions it would be Reilly, David and I, and sometimes it’s hard to imagine if the bass part would work. We have a whole band now to work on recordings, so hopefully we’ll be able to do more off the floor instead of multi-tracking.

NT: Why did you decide to record Sugar At the Gate in L.A. considering the wealth of music talent in Montreal and what did this offer the record?

JP: The thing about recording was we were all living there as well, so it became a pretty immersed experience of doing everything together. There wasn’t a limit on how much time we could spend on it, and there was a lot more space, with a garage and rooms, where in Montreal you’re pretty much living in small apartments and then going to use studios more. Practically speaking it was cool to have that much space. That place has a lot of memories and it was a strange place to live in. We all want to keep our lives moving so it was nice to be able to go there to do it. We didn’t think about where we were, it’s just where we recorded it, there might be touches of it on there but it was definitely subconscious.

NT: What else did you want to change for this record?

JP: When it comes to music, there’s an attitude that we all share, we always want to spend time on it and make different things. After touring and having space from the last record, it’s natural that it would sound different. We wanted to make the drum recordings better, we do it all ourselves so it’s always good to have practice. We all think about music and writing a lot, but we’re also anti-intellectual in the approach, it just comes organically and you get a vision of what you want.

NT: What has self-producing and recording offered you that bringing in another creative mind might lose?

JP: We consider ourselves musicians and people that make recordings, so if we want to make a recording, why would we pay someone else to do our job? It sounds weird maybe because it’s a super normal thing to get producers, but for us it’s just what we do, so why would we have someone else do it for us. I learned to make music through making recordings, so it feels like my responsibility.

NT: While you and David obviously have different trademarks to your writing, what do you think is the constant core that makes it TOPS?

JP: I guess because the band plays all the songs that’s what makes it TOPS. We used to worry about it all sounding like the band but we realized it was unavoidable and sometimes try to work against it. David’s song writing is objective and he can bring out emotions in songs, he likes to make songs all the time so its intuitive. I put a lot of emotion and my own experiences into the music. The way it reaches people is kind of a transference. It’s the difference as a singer where you can be super direct about things. David and I work on each others’ songs though because we want them to be the best they can be and be effective and good.