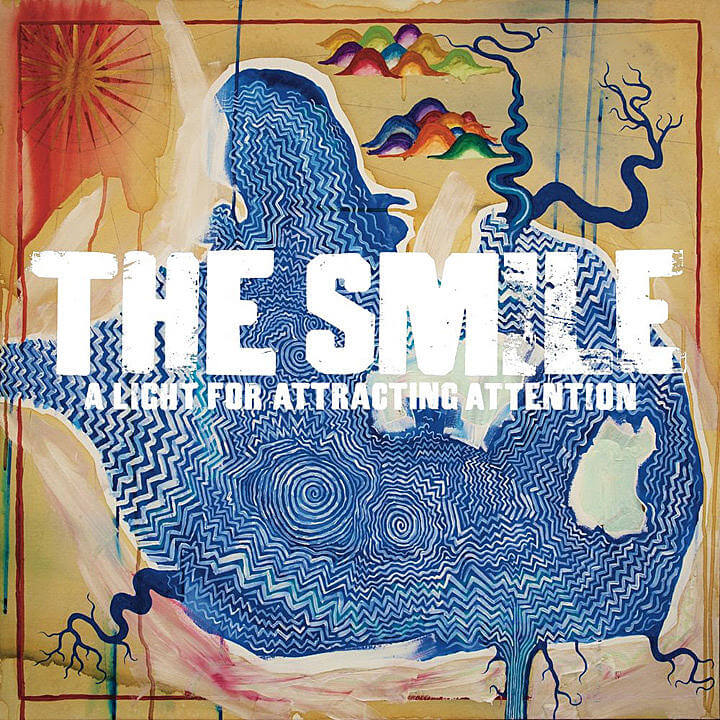 For the uninitiated The Smile is a trio made up of Thom Yorke and Jonny Greenwood of Radiohead fame, alongside Sons of Kemet drummer Tom Skinner. In collaboration with long-time Radiohead producer Nigel Godrich, the trio have been toiling away on their debut LP ‘A Light for Attracting Attention’ since making a surprise appearance during Glastonbury’s live stream event last year. Theirs is a sound that cherry-picks all the best bits from their day jobs but reassembles them into something refreshingly new. Yes, there are Radiohead comparisons, there was always going to be but there’s something about the album’s arrangements and The Smile’s flirtations with post-punk that ensures this new project isn’t overshadowed by its band member’s glittering CVs.

As with most releases at the moment, The Smile is a Covid-19 lockdown venture; seemingly the threesome found solace in creating something new, while challenging themselves to approach music differently. What we have is an album that feels unencumbered and dynamic; presumably the freedom of being able to create without the pressure of public expectation or a looming album release date suited them immensely. Sonically ‘A Light for Attracting Attention’ is bestowed with an inspired richness; combining electronics, brass and string arrangements to off-kilter rock ‘n’ roll stylings. Let us not forget Greenwood is a decorated film score composer with a slew of awards and nominations to his name for the likes of There Will Be Blood and The Power of the Dog. This influence is key to this album’s sophistication and depth. Equally, this might be Yorke’s best vocal performance ever, displaying a range that skips from bruised and angelic to snarled and full bodied.

‘A Light for Attracting Attention’s manifesto is writ large by its two opening tracks, ‘The Same’ and ‘The Opposite’. There’s a cunningness here, as the band display their multifaceted nature right out the gate. The former is a traversal through tonal electronics that pulse and burble up to a gradual, intense crescendo. Lyrically the song pleads for unity, which is rather apt in these fractured times “people in the street/please/we are all the same”. Although, there’s still room for some classic Thom Yorke prickliness as the vocalist trills “somebody’s telling lies/simplest motherfuckers/one mistake after another”. Who could this be about? Not the UK’s bumbling, incompetent Prime Minster? Surely not, he’d never lie or make mistake after mistake, would he? After ‘The Same’s synthetic composition, ‘The Opposite’ springs into gear with a clear duality, as it snakes and wiggles via jazzy drums and a dark, menacing bassline. The song is locked in a rhythmic trance, which is capped off by a guitar line in its latter stages that sounds like its spiralling down a plughole.

After ‘The Same’ and ‘The Opposite’ kick off proceedings, from this point onwards it’s open season as far as ‘A Light for Attracting Attention’ goes; ‘Thin Thing’ is an awkward melange of post-punk textures that eventually develops into an unhinged beast through pockets of tension and release, while ‘Pana-Vision’ – which was aired in the last episode of Peaky Blinders – adopts an eerie guise that’s illustrated by a spectral piano motif and swooning strings. Yorke’s ghostly falsetto emphasises this point further, as he coos “I don’t want to hate you/I don’t want to beg”. A primal, rawness envelopes ‘You Will Never Work in Television Again’ and then there’s ‘Open The Floodgates’, a song of serene fragility. Bubbling synths fuse with piano as Yorke appeals for a guiding hand “someone lead me/out of the darkness”. ‘A Hairdryer’ jitters with a nervous energy, as tribal drums pirouette around a slithering guitar riff. The addition of flourishing orchestral layers buoys a theatrical element to the song’s quivering nervous energy. A pulsing post-punk tautness buffets ‘We Don’t Know What Tomorrow Brings’, from side to side, as Yorke’s voice admits he’s trapped in a toxic environment “I’m stuck in a rut and I can’t find my way out”. There’s a stark beauty to ‘Free in the Knowledge’s stripped back presence. Strummed acoustic guitar and strings intertwine with a tarnished elegance as Yorke’s divine tones depict a human delicateness “free in the knowledge/that one day this will end/free in the knowledge/that everything is changed/and this/was just a bad moment”. The track’s emotional core is punctuated by lush cinematic stylings, which really help accentuate its vulnerability. Closing number ‘Skrting on the Surface’, another track stitched together via elegant strings, marching drums and Yorke’s delicate vocals, focuses on our own mortality “when we realise/we have only to die/then we’re out of here/we’re just skirting on the surface/we have only to click our fingers/and we’ll disappear”. The sway of orchestral nuances and swooning brass brings The Smile’s debut to a heavenly finale.

‘A Light for Attracting Attention’ is a magnificent record by once in a generation musicians. It’s an album to make you more than smile.

Purchase A Light for Attracting Attention by The Smile HERE 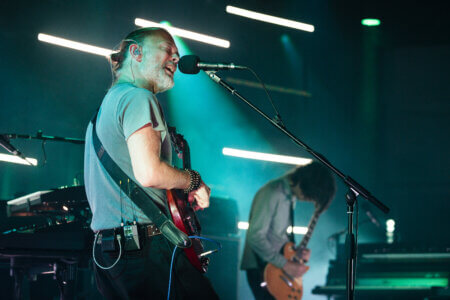