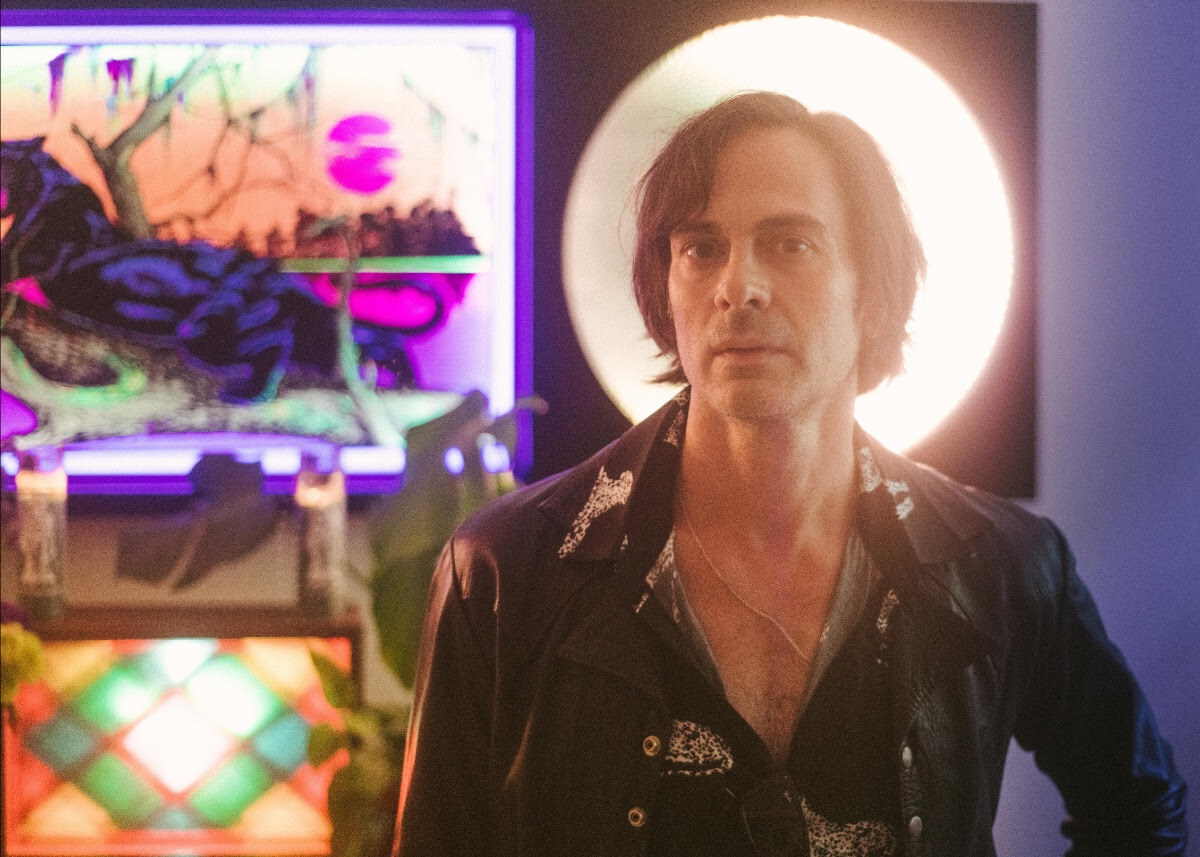 The Expanding Universe of Dean Fertita: Leslie Ken Chu chatted with the artist about the inspirations behind Tropical Goth Club and much more
Words by Leslie Ken Chu
Share on TwitterShare on PinterestShare on PocketShare on RedditShare on FacebookShare on Email

Like stumbling upon a mirage that turns out to be a real oasis, Dean Fertita’s debut album as Tropical Gothclub was a joyous accident. The self-titled 11-song suite, out via Third Man Records since November 4, originated from ideas he and Allison Mosshart bounced back and forth in early 2020. “In my brain, I was not making a solo record. I was demo’ing ideas that could end up either with the Dead Weather or Queens of the Stone Age,” he says of his bands over Zoom from his home studio in Nashville. But as time passed, he felt the songs lived together, an inkling confirmed by another one of his Dead Weather band mates. “Jack White encouraged me to put them out as a record. Without him, these songs might still be sitting, waiting to find a place.”

Tropical Gothclub is a gritty, cinematic, psych-drenched expression of Fertita’s longstanding fascination with ideas of what the future might look like and how they can often become antiquated, “like the world’s fair idea that doesn’t exist anymore, or concept cars. I grew up in Detroit and would go to auto shows and see these things that may or may not ever come to exist, but it’s a really cool vision of how things could be in the future.”

The album’s futuristic nostalgia strikes a personal note with Fertita that goes beyond world’s fairs and concept cars. “As terrible and confusing as [the pandemic] was when it first started, the idea that we’re all in this together, and the support you’re getting from friends—take the negative side out, in the future I will be looking back at this time remembering it vividly.” Tropical Gothclub began as an activity between Fertita and his 11-year-old daughter. In August 2020, he and his family relocated to California so he could work on a new Queens of the Stone Age record. “We lived near the water, an idyllic situation for what was going on. We could go to the beach whenever we wanted to.” But his family had no social life outside of his immediate friends; his daughter was cut off from her friends besides phone calls and FaceTime. After a few months, she became noticeably depressed.

“We’d go for these walks on the beach, the only social activity we really had, and she still wouldn’t snap out of it,” Fertita recalls. “And we’d just joke about going to the beach, calling it the tropical gothclub. Then that carried over into this thing where we started taking pictures of the most vibrant things we could trying to make them look moody. It was this art project with my daughter for a while, trying to work her through some of this stuff. But it started to feel like it had so many other meanings, and it seemed representative of this project and music and this
dynamic of push and pull.”

Like their photo project, Tropical Gothclub is an escapist exercise. “In this particular time, we weren’t necessary grieving what was going on so much as trying to find ways to get away from it,” Fertita says. “There were so many things that played into the concept of Tropical Gothclub, and one of them was a Jack Kerouac sort of thing where you’re driving down through Mexico, going to find that place where nobody can find you.” Indeed, Tropical Gothclub captures the feeling of speeding away from a burning metropolis towards a paradise that might not exist and the dread of hitting the end of the line, when your car won’t go any farther, because it has broken down or you’ve reached the ocean.

Tropical Gothclub doesn’t provide a clear road map for escapism, but the album’s influences are easy to track. Songs like “Infernal Inside,” moments of brightness shining through the rubble, dig back to Fertita’s power-pop roots in bands like the Waxwings and Hello=Fire. Locked down during the pandemic, he found himself revisiting the music and art that filled him with wonder as a kid, classic staples like the Beach Boys (hear the richly layered, woozy, melodic pop of “Double Blind”), Led Zeppelin, AC/DC, and the Zombies, “stuff you’d hear your neighbour while they’re working on their car in their garage blasting.” He also spent the summer of 2020 listening to Funkadelic, ’60s and ’70s reggae, and Nigerian psych rock, all while re-watching Jamaican films like The Rockers and The Harder They Come; no doubt, this particular cultural diet rubbed off in the loose, funky rhythm of “Thunder Towards You.”

An album of contrasts, the palpable desperation on Tropical Gothclub is accompanied by a vibrant visual aesthetic inspired by black light posters and infinity mirrors; in fact, two such mirrors hung in Fertita’s studio, distorting his familiar reality. “That was front and centre to me the entire time I was working on this album.” Fertita also recalls a trip to the Digital Art Museum in Tokyo while on tour with Queens of the Stone Age that left an indelible impression on him. “It was so incredible and life affirming. You go into this planetarium, and you’re watching 360 crazy visuals, and you walk through another part where you walk through water and there are digital coy fish in the water. You take off your shoes and roll up your pants. It’s tactile and immersive.You go from one really dark room into this other that’s all mirrors and brightly lit. All of us were like kids the entire time we were in there.”

Fertita hopes to one day create his own immersive experience based around Tropical Gothclub. Certainly, there’s potential for spin-off projects: the vocal effects and squiggly electronics that zig-zag throughout “Death Rattle” could foreshadow more electronic-focused music. “I would love to do that. As a matter of fact,” he reveals, “one of the things I’ve been talking about with my friend [musician and producer] Dave Feeny, who is the closest I’ve had to a collaborator with this, is maybe doing some radical remixes or even additional recording to try to find another character that might live in this. Now that we have this record, we have this name, maybe there’s something we can chase down and explore that might be kind of fun and be really defining.”

Unable to pursue a conventional touring or promotion cycle due to the pandemic and commitments to other projects, Fertita has also considered expanding the universe he’s established with Tropical Gothclub in physical ways. “I’ve had this idea for a few years that I’m inching closer to being able to put it together. I would love to do things that are more event focused, where music is one component of it. Maybe we have art. There’s a lot of people I know that are in this similar situation where their main thing is something else, but they’re very creative in other ways. Maybe we can combine forces and put something together, do a few shows a year, something like that.”

The future’s uncertain, and the end is always near. But wherever Fertita’s escapism takes him— no matter the size of the universe around him or conceived in his head—he can at least take comfort in the reality that there’s always love at the edge of the world.