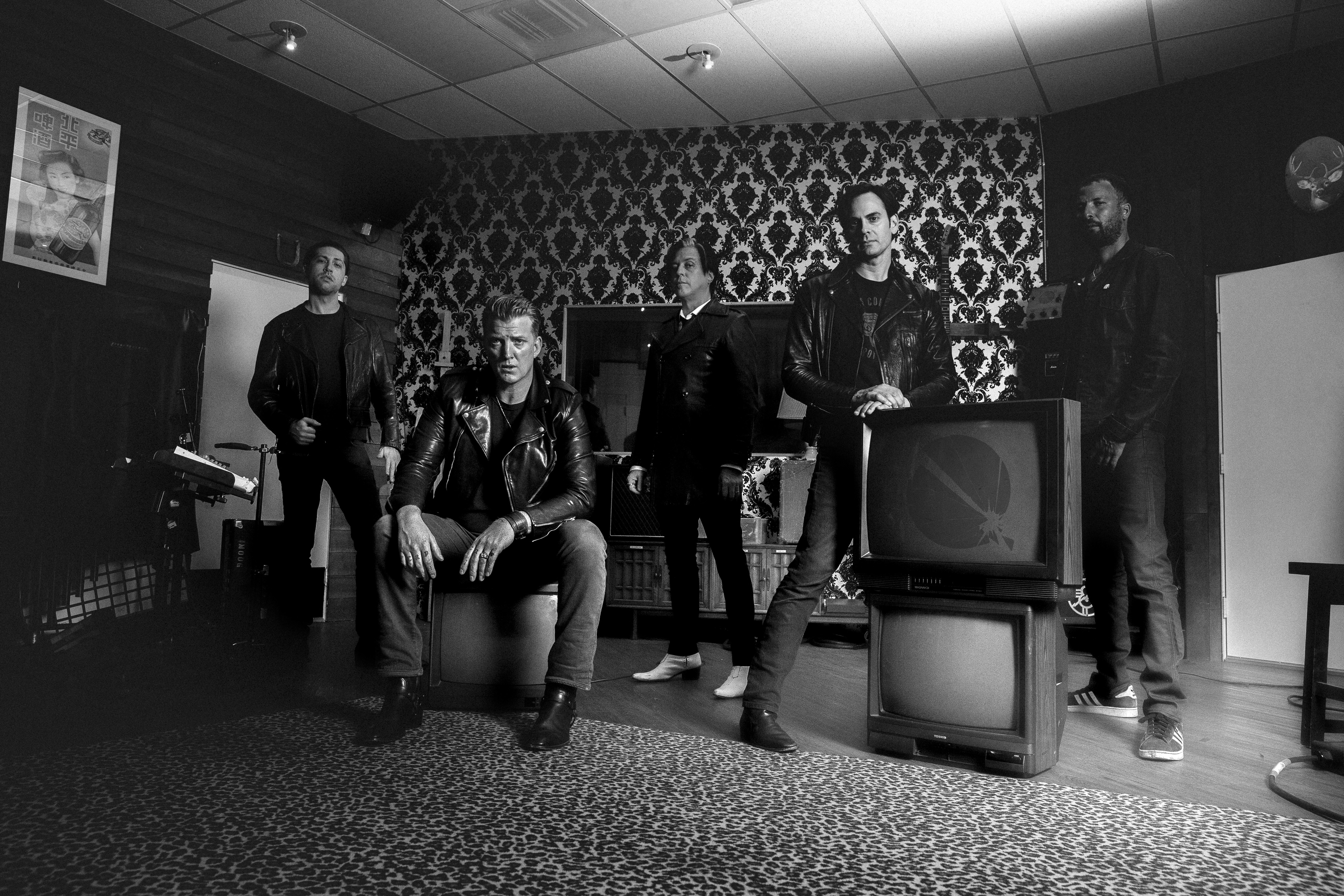 Queens of the Stone Age are such a unique beast of a band, that it’s a wonder they release albums as often as they do. After their dark 2013 album …Like Clockwork the band needed some time before another release. After working with Iggy Pop and reflecting after the Eagles Of Death Metal show at the Bataclan, Joshua Homme had a renewed sense of excitement, with the band aiming for a more upbeat direction on their new record Villains. We caught up with guitarist and keyboardist Dean Fertita (also Dead Weather, Hello=Fire) ahead of their upcoming tour to talk about their new record, his changing role in the band throughout the years and exactly who their villains are.

Northern Transmissions: Did having Jon Theodore holding down drum duties on this record change the dynamic pretty noticeably from alternating between Dave and Joey?

Dean Fertita: I think that was a huge factor on this record, just having that stability of it being only us. The other cool thing, especially working with Jon, was that he can pretty much do anything. Having Mark involved with Josh on this record, it was fun to see them put so much demand on him and he never blinked, he was always right there with whatever they were asking. Overall having that cohesion for us was a really nice way to work.

NT: Was Mark Ronson part of the more upbeat feel?

DF: Mark was a huge influence on the environment that we wanted for this record. It’s pretty well documented that the last record was a pretty dark time for Josh, and heavy emotionally. So the one conscious decision we made as a band was to have a starting point that was totally different from that one. Mark fit in perfectly, no matter what the perception was of us working together, it felt so easy. He was able to keep things light in the room, but he’s a fan too, so he knows what Queens is and wants it to be the best version of us we could be.

NT: Speaking to the darker feeling of the last record that came from Josh’s emotional state at the time, was there somewhere new that you were pulling from to make this record so hopeful?

DF: It’s more of a starting point, because once we get in there and start writing, anything that you were trying to create just goes out the window. The song’s really are what they are, and that’s it. It was just having a mindset going into it, we didn’t put too much expectation beyond trying to do something different. We’ve been doing records for a long time, and no one wants to repeat what we’ve done before, we want to make it interesting for ourselves. The most important thing we do as a band is ask ourselves why we’re doing something before we do it. And we better have a good reason or we don’t make a record.

NT: Did the time you and Josh spent working with Iggy fuel the writing and atmosphere of this record?

DF: Definitely. What we went through for that record, we’ll be figuring it out for years. It was definitely inspiring, within two weeks that we stopped touring it Josh was amped and ready to get back in the studio writing this record. That experience allowed us to reconnect with loving playing. For me it got me in touch with those feelings from being a kid of learning to play guitar. That wild love for music, that definitely carried over into this record, no question.

NT: Between you, Josh and Troy there’s a lot of guitar on this record, so how do you build your guitar arrangements so well without feeling like you’re being redundant?

DF: Having three people to play guitar is extravagant. We’re well aware of redundancy and there’s no need for it. I view my role as a little bit more supportive as far as guitar playing goes, so if there’s a way to interestingly incorporate three guitar parts, I’m all for it. But I don’t ever feel like “I play guitar so I have to play guitar on this song.” It’s funny, it’s usually what instrument what instrument we’re standing closest too when we’re working on the song, and we just try to come up with ideas. There’s not a real heavy emphasis on who has to do what, at any time. One thing is, I think maybe it will help Josh over time because it will give him more freedom, so he’s not tied to playing all the time. Playing shows for two hours, it’s interesting to see him get away from it and express himself differently as a frontman when he’s not tied to a guitar. Looking to the arrangements with three guitars, it goes back to the “why” question. There’s definitely ways that we can build chords, if you have each guy playing a single note, and the tones are off just slightly, you can build a chord that’s different than how you’ve hear it previously. On this record “The Way You Used To Do” is a great example of three guitars going, it’s not distracting. That song is surprisingly complicated, and the way the interaction between the guitars and the way you have to play that song, it’s the most interesting use of three guitars for me, because of the deception.

NT: Considering you’ve spent the last few years between Queens, Hello=Fire and The Dead Weather records, do you ever find yourself pulling each project into each other?

DF: Always. I think that’s an obligation for me as a musician is to always learn and bring something new to the table each time we move forward with something. If Queens are going forward, we want to bring something new out of ourselves to do it, and the best way is to just draw from experience. The more things I can learn from, the more each project benefits from it, and you stand on the shoulders of each project before it.

NT: Do you think having these different outlets allows you to stay as creative as you want without feeling stifled in one group?

DF: It takes that out of the equation in every scenario. You don’t have to worry about egos, or feeling you have a need you’re not getting, because it’s getting addressed somewhere. Another luxury to having that many opportunities, is that it never gets in the way of the project of the moment.

NT: How has your experience in the band changed from when you joined during the Era Vulgaris tour up to now?

DF: I can’t believe it’s already been ten years. When I first came in, I’d come strictly as a hired gun, who could do support work and cover things they couldn’t do as a four piece. That all went away pretty quickly, it was surprising. I was a little uncertain going into it, I hadn’t met any of them going into it, but I knew all the records obviously. On a personal level being able to connect with them as friends was really immediate, and that laid the groundwork. Me and Mikey came in at the same time, but it didn’t feel like that kind of playing as a job scenario. Then over the years it’s been about building trust, and then we made …Like Clockwork together, toured on that for two years, and then Josh and I made the Iggy record together. It’s just a series of things that intertwine you so much beyond just making records together. Over the years, I don’t think about my role like that in the band anymore. We vacation together, these guys are my best friends. It’s just having years of building trust and having experiences together, getting to know each other and have our families hang out together. We’re fighting for the same cause professionally and personally, we aim for the same things in life, what we’re trying to do with music. It’s gotten closer, it’s really simple, spending time with people you care about and having a singular focus.

NT: Talking to your Hello=Fire material, what does the solo project offer you that Queens or even the Dead Weather don’t?

DF: When I was younger I would feel that more, but over the years I get so much out of every experience now. Each record I feel lucky to be doing it now. That record was something I did over the course of a couple days with my friend Brendan Benson (The Raconteurs) who I’ve known since high school, and toured in bands with. He knew that I’d been writing, and said “Let’s go and record,” so we did it and it was great. It was ultimately about de-cluttering my brain. If I can have an outlet and get rid of some of those ideas, and free up space, it’s a great thing for me. I don’t think of it as a hindrance or that I need to do my own thing.

NT: Do you think the studio party atmosphere between you and the Foo Fighters contributed to the record at all?

DF: It was more of a friendly, checking-in to see what the other person is doing scenario, but we were really secretive. We didn’t really give too much away to those guys until the end. This record was strictly us, which was surprising, because it’s really been Queens thing that people just show up at the studio and they end up playing on the record. We really insulated ourselves and did it ourselves, so the only outside influence was Mark Ronson.

NT: Looking to the album’s title, you guys feel like villains yourselves or do these happen to be more who you’re writing about on this record?

DF: What I love about that title is it’s open to so many different interpretations. For me the biggest villain we’ve dealt with lately has been time. Realizing all you have is right now, that’s been a theme right now. You can get deeper into it and look at the cover, who’s the best villain of all time is the Devil. It’s a little more abstract in how I viewed it and how Josh viewed it as making sure you’re taking the risks you need to take and appreciating life.