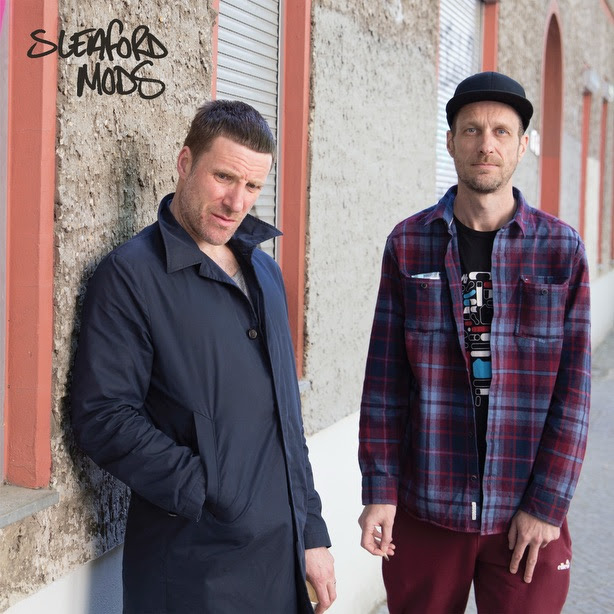 UK hip-hop/punk duo Sleaford Mods have announced their new self-titled EP which will be released via Rough Trade Records on September 14th 2018. The EP will be available on 12”, CD & DL. This is the band’s first new music since last year’s English Tapas album. Recorded just a few months ago in Nottingham, it features five new tracks including the lead single “Stick in a Five & Go”.

Jason Williamson on the new tracks:

“The lead tracks are mostly full of violent tendencies that only transpire through imagination. People are powerless under the political monster and the intense anger and frustration morphs into illusions of attacking each other through the bravado of social media, depression and paranoia.”

Side One
Stick In A Five And Go
Bang Someone Out

British hip-hop/punk act Sleaford Mods began in 2006 as the recording project of Nottingham vocalist and musician Jason Williamson. The initial seed of the band’s aggressive, no-nonsense, blue-collar sound was worked out by Williamson over the first couple of years both in the studio and at occasional gigs, where he would rap over prerecorded beats and samples. After relocating to London for a while, he returned to Nottingham, where he met Andrew Fearn, a veteran musician who was DJ’ing at the time. The two joined forces in 2010, with Fearn taking on most of the backing tracks, freeing up Williamson to further evolve as a vocalist and lyricist. Their first recorded collaboration was on the CD-R release Wank, which appeared in 2012. Their minimalist combination of either lo-fi drum machine beats or live drums mixed with pounding bass guitar and Williamson’s ranting wordplay set the tone that would define the band’s sound

A prominent festival appearance led to their signing with the abstract punk label Harbinger Sound, which released Sleaford Mods’ 2013 album, Austerity Dogs, their first proper label release and first to receive widespread distribution. The album was critically well-received, and Sleaford Mods’ reputation and profile were raised significantly as they toured the U.K. and Europe. Their follow-up album, Divide and Exit, was released in April 2014. That October, the previously digital-only singles collection Chubbed Up was given a physical release with three bonus tracks. The following month the duo capped off a triumphant 2014 with the Tiswas EP, which expanded on the Divide and Exit cut with previously unreleased tracks. They also collaborated with the Prodigy on the track “Ibiza” and began work on a new album. Key Markets, which took its name from a grocery store in Williamson’s hometown of Grantham, was inspired by “the disorientation of modern existence” and arrived in July 2015. The following year, the duo signed to Rough Trade, which released the T.C.R. EP that October and the full-length English Tapas (named for a menu item Fearn saw at a pub) in early 2017